Is the man who ran Trump's campaign for free the mastermind behind the most unhinged Ukraine conspiracy theory? 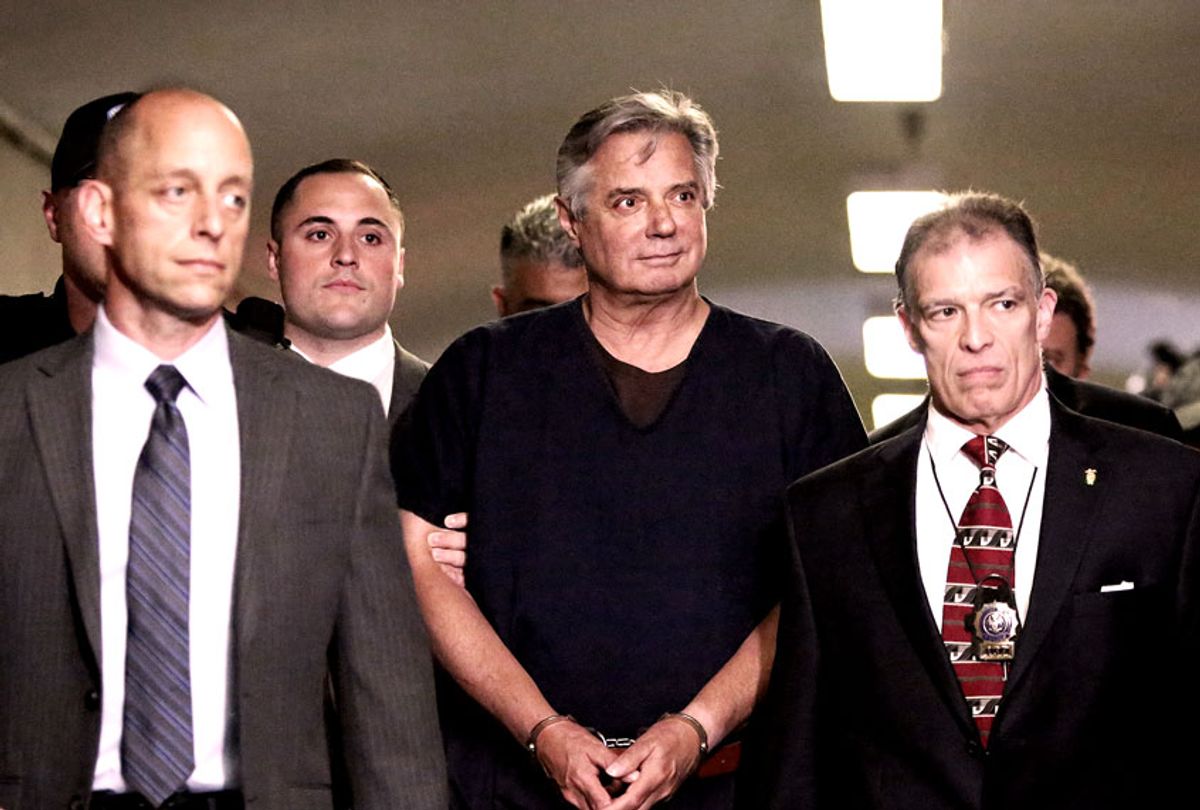 Has anyone else noticed that we already had a presidential election during which all you heard was “Russia! Russia! Russia!” and now here we are three years later in the middle of another one, and all you hear is “Ukraine! Ukraine! Ukraine!”? It’s easy to forget the good old days when you would read long take-outs by political whizzes like Jack Germond about the genius of some Republican state committeeman in deep Indiana who was going to turn out the south 32 counties for Nixon in a tightly contested primary. Who even knows what a Republican committeeman is these days, when you’re more likely to read that some hack Ukrainian prosecutor holds the keys to Trump’s re-election.

It’s 2016 all over again, folks. The only thing that’s changed is the name of the corrupt foreign country that Trump is tapping to influence his re-election to the presidency. Even some of the players are the same. Remember Paul Manafort, the late, lamented former Trump campaign chairman who fancied ostrich skin jackets and $12,000 suits? Well, old Paul is currently sporting prison polyester, waist chains and handcuffs, and he’s ba-a-a-a-a-a-ack!

Manafort’s name surfaced last month in reports that Trump’s personal attorney, Rudy Giuliani, has been talking to the jailed former Trump campaign manager through his attorneys, seeking confirmation of a free-floating right-wing conspiracy theory that it wasn’t the Russians who meddled on behalf of Trump in the 2016 election, but the Ukrainians who butted in on behalf of Hillary Clinton. Yep, you read that right. From his cell in prison, no less, Manafort has been pushing a narrative about the 2016 election that discredits the rationale behind the entire investigation by Robert Mueller into Russian election meddling.

Even the name of Konstantin Kilimnik is back in the news. Remember him? He was Manafort’s Ukrainian-born former partner who famously joined him in a New York cigar bar where Manafort passed him polling data from the Trump campaign for the hotly-contested states of Michigan and Wisconsin, among others. And why would Trump’s campaign manager give Trump campaign polling data that was ordinarily kept secret to a Russian national? Could it have had anything to do with the timing of the release of Russian-hacked emails from the Democratic National Committee and Clinton campaign chairman John Podesta in the closing days of the campaign? Kilimnik, who the FBI says has ties to Russian intelligence services, has also been pushing the theory that it wasn’t Russians who hacked the Democrats’ emails, it was Ukrainians.

The fact is, there is so much new stuff about Trump trying to get a foreign country to help in his re-election that we are liable to forget the outrages against our democracy that we’ve already endured. So let’s stop right now and remind ourselves that it was the Mueller investigation that produced 25 indictments of Russian citizens for hacking Democratic Party emails and for running a social media campaign intended to influence the 2016 presidential election. And it was also Mueller and his prosecutors who indicted and convicted Trump’s former campaign manager, — that would be Manafort —for tax and financial fraud crimes that landed him in prison for seven and a half years.

Let’s also remember where Manafort carried out the crimes that landed him in prison: Ukraine. According to the Washington Post, as part of a plea deal, “Manafort acknowledged that he made more than $60 million in Ukraine, laundering more than $30 million of it through foreign companies and bank accounts to hide it from the IRS and cheating the government out of $15 million in taxes. He also agreed that he had lobbied in the United States on behalf of Ukrainian officials without registering and that he conspired to tamper with witnesses in his case.”

And where do we find ourselves today? Right back in Ukraine. This time it’s Manafort’s former boss, Donald Trump himself, who has been personally managing the campaign to get the Ukrainian government to help his re-election efforts. In fact, it was this week that we learned from George Kent, deputy assistant secretary of state in charge of Ukraine, how Trump wanted Zelensky to announce an investigation into Biden and the 2016 election. Kent told House impeachment investigators that Trump “wanted nothing less than President Zelensky to go to a microphone and say investigations, Biden and Clinton,” according to the Washington Post.

Even the minor characters are similar. In 2016, we had low-lifes like Kilimnik and “Professor” Joseph Mifsud running around on the fringes of Russia’s efforts to penetrate the Trump campaign and influence the presidential election. For 2020, we’ve got a couple of real jewels by the names of Lev Parnas and Igor Fruman, both born in the former Soviet Union, and you guessed it! Both are currently under indictment on federal campaign finance charges. In 2016, the connections to Trump were made through Manafort and campaign advisers like George Papadopoulos. This time, it’s Giuliani who is Trump’s cut-out to these foreign-born scam artists. And what was Giuliani using Parnas and Furman for? According to The New York Times, beginning in January of this year, “Mr. Giuliani had enlisted Mr. Parnas and Mr. Furman to collect information and make connections in Ukraine that could be used to damage Joseph R. Biden Jr., the Democratic presidential contender, and to undermine the special counsel’s investigation into Russian interference in the 2016 election.”

Even the way they have been moving funny money around was reminiscent of 2016. Back then, Manafort had pulled in millions from his work for former Ukrainian president Viktor Yanukovych, which he laundered through shell companies and bank accounts in Cyprus. This year, Parnas and his buddies used a company called Fraud Guarantee, that apparently had no employees and no customers, to funnel money to Giuliani through a complicated deal with a Long Island lawyer and a shell company in Belize.

Parnas and Fruman were tapped out, having recently made the illegal $325,000 contribution to America First Action, a super PAC supporting Donald Trump, for which they are now under indictment. But they wanted a connection to Giuliani they could use back in Ukraine to drum up business deals, and apparently the way you get connected to Giuliani is to give him money. So they got a Long Island lawyer named Charles Gucciardo, who was a Trump supporter and large-money donor, to invest in their company, and then used the good offices of Fraud Guarantee to funnel $500,000 to Giuliani.

Parnas and Furman have appeared in numerous photographs with President Trump, including photos taken during a private dinner in the White House attended by Giuliani and Vice President Mike Pence. Trump, of course, has claimed that he doesn’t know either Parnas or Fruman and has “never met them.”

It’s déjà vu all over again, isn’t it? In 2016, the Trump campaign was linked to Russia. This time, it’s Ukraine. In 2016, it was Manafort. This time, it’s Giuliani. Both of them linked to shady characters from Russia and Ukraine, both of them on the take for money that has been passed through shell companies and offshore banks. These guys can’t touch anything without turning it into a crooked scheme. And the biggest and most crooked scheme of all is Donald Trump’s campaign for re-election.