How Knorr seasoning became a staple in Mexican American kitchens 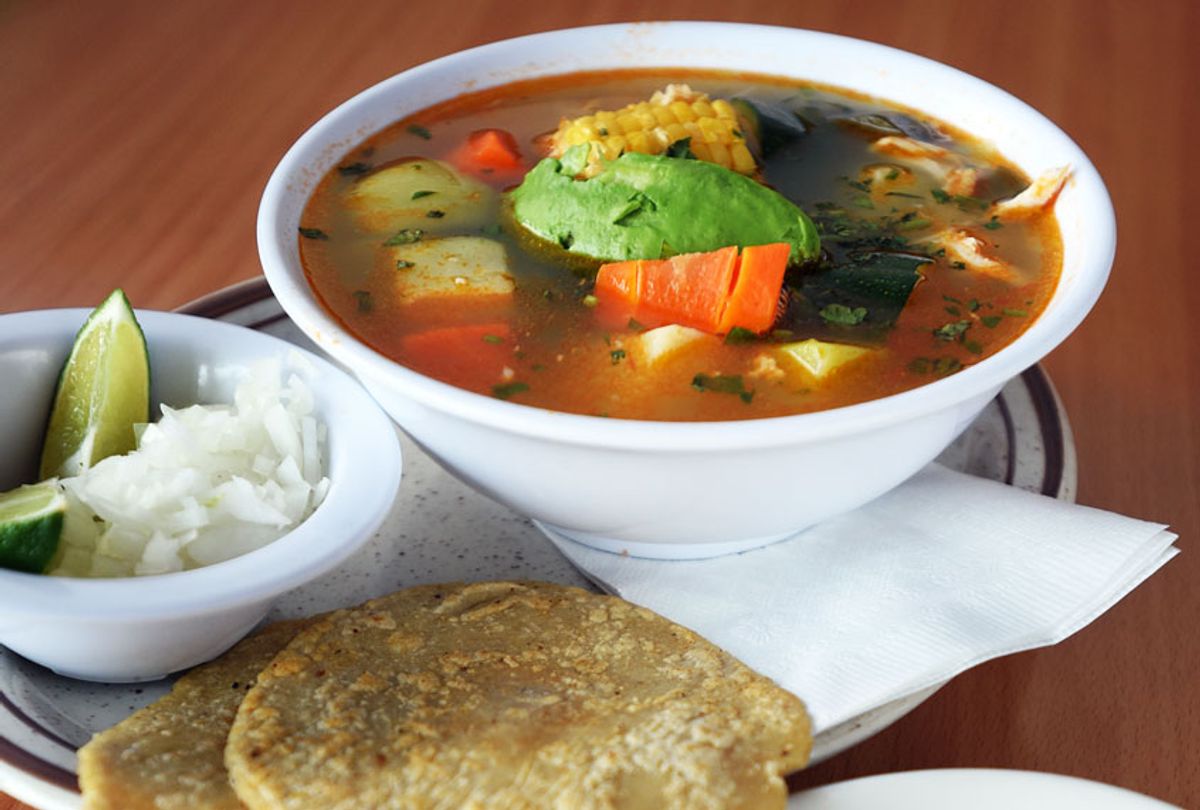 There are maybe three aisles at the Mexican tienda closest to my apartment, each of which are absolutely packed with inventory all the way up to the roof, where rows of primary-colored piñatas and lanyards with sequined and laminated Virgin of Guadalupe appliques dangle from the ceiling tiles. It’s a place for the essentials: a single lime, mango juice, a packet of dried arbol chiles, tortillas — and Knorr-brand granulated chicken bouillon.

Knorr has products all throughout big-box supermarkets; you’ve probably seen their slim green packets of processed rice and pasta sides and, especially this time of year, their turkey gravy mix. Many of the company’s products sold in the U.S. have flavor profiles that feel very American (or Americanized “European,” at least): cheddar-broccoli, alfredo, stroganoff. Cheesy, buttery, creamy.

But I don’t think I’ve ever been in a Mexican American or Latin American kitchen — whether it belonged to chef friends, family members or boyfriends — where a small tub of the brand’s chicken-flavored bouillon (or caldo con sabor de pollo) wasn’t sitting in the pantry. It’s a staple at Mexican groceries and Latin markets. The basic red chicken logo calling out from the spice aisles and, in the case of one supermarket I visited, Mi Preferida Supermercado, from a specially built endcap pyramid formed from one-pound tubs of bouillon.

If you’ve never tried it, I feel the need to take a moment to explain that the off-gold powder doesn’t just taste like dried, granulated chicken broth or pulverized chicken skin cracklings. It’s this addicting blend of umami, acid, salt — a lot of salt — and just a touch of sweetness.

“I did grow up with Knorr caldo con sabor de pollo in our kitchen,” recalls Sylvia Casares, Houston-based chef and owner of Sylvia’s Enchilada Kitchen and author of “The Enchilada Queen Cookbook.”

“My mother used it primarily when preparing arroz con pollo to add additional flavor to her amazing recipe,” Casares said. “This product is used in many or perhaps most Mexican kitchens in preparation of sopas.”

While Anthony Lamas, James Beard-nominated owner of Seviche in Louisville, Kentucky, says he remembers it being used in both his mother's and grandmothers’ kitchens.

“Even non-Latinos, a lot of families in California cook with a Latino influence and know the secrets,” Lamas said. “It’s a great way to add some quick flavor since it has some citric acid and annatto, giving it a little extra flavor. It’s a must for Spanish rice, or any soup or stew.”

Knorr’s history reaches back to the 1840s in Germany, where Carl Heinrich Knorr opened a factory in Heilbronn to supply chicory to the coffee industry; several years later, he began using the factory lines to experiment with the flavor of dried vegetables and seasonings.

“Knorr bouillon was first introduced in 1912 in a cube format, and quickly became a staple for families and home cooking,” said Brian Critz, director of Knorr marketing. By the 1950s, Knorr bouillons and soups were available in eight countries.

So how did it migrate from Germany into the Latin kitchens? Well, according to Critz, the company started working with consultants — or “flavor experts” — across the globe to tailor tastes for different markets. “With bouillon, for instance, different countries use different formats,” Critz said. “While granulated bouillon is the format largely used in Mexico, many parts of Latin America tend to cook with cubes.”

Once they had developed the appropriate products, they slowly started selling across the globe; it was a success.

“Knorr is available around the world and in every country, but with Knorr bouillon, the top markets in order are Indonesia and Mexico,” Critz said. “The United States market is the fourth-largest market”

In an era where it seems people increasingly thumb their noses at processed foods and pre-mixed spice packets, it was nice to know that both Lamas and Casares still use Knorr in their home kitchens — Lamas is partial to the caldo de tomate con sabor de pollo, the variation with a slight tomato twist. Casares also uses it in her professional kitchens and specifically recommends the product in her cookbook.

“I was once in a mercado in a very small colonial town in Central Mexico where there were a number of small open-air eateries,” she said. “The women cooks prepare delicious home style food — breakfast or lunch — for mostly locals. I spotted a very large jar of Knorr on a shelf and immediately felt very ‘okay’ about using this product in my kitchens!”

So next time you’re shopping to make Mexican or Latin-inspired food at home, consider adding a jar to your list. A tablespoon of that salty yellow powder makes a world of difference in arroz con pollo and chicken enchiladas. Go crazy — let it cross over into your day-to-day cooking, too. Last night I used a tablespoon to flavor chicken and dumplings, the night before I added it to butternut squash stew. Once you try it, you won’t be without a shortage of potential uses.