Send in the clowns: Impeachment is serious stuff, but GOP wants a circus

Expect Jim Jordan and Devin Nunes to go full goofball. Adam Schiff and the Democrats will have none of it 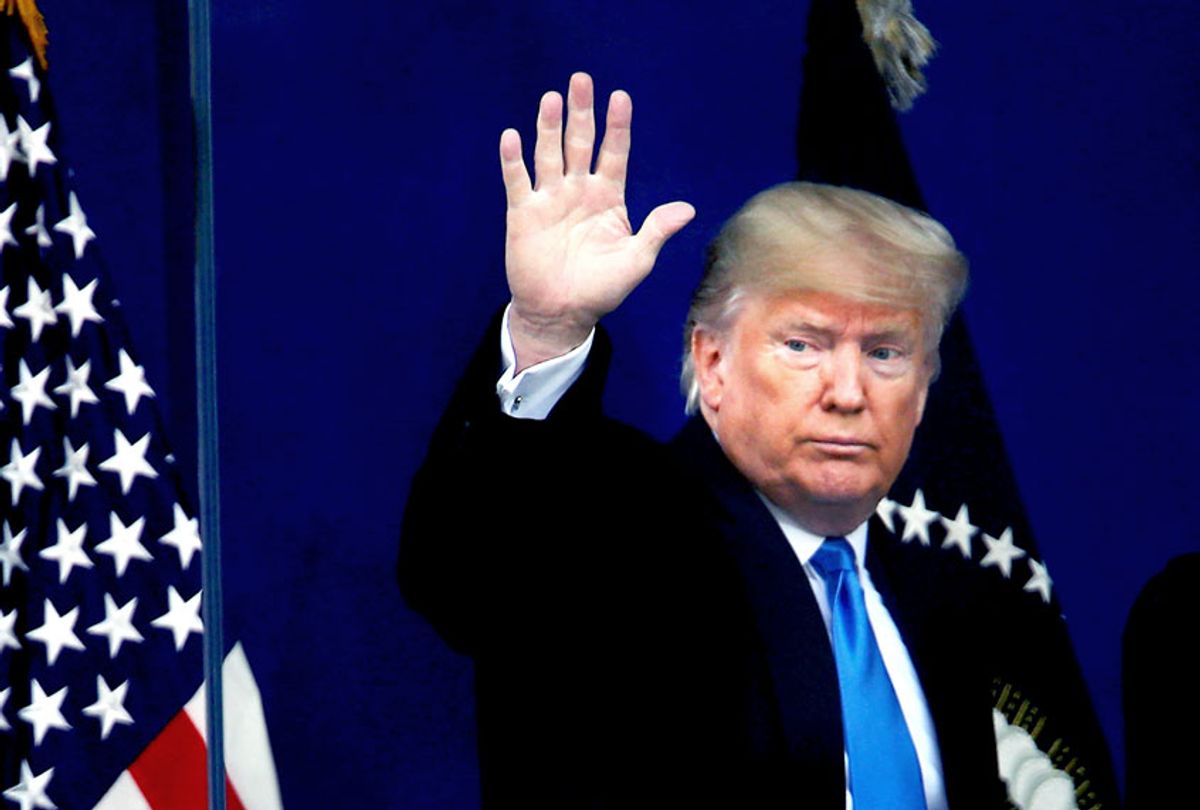 The impeachment of Donald Trump is not just a matter of holding the president accountable for his confessed plot to extort Ukraine at a time when Russia is engaged in both an invasion of that country and a cyber-invasion of the United States. This impeachment is also a mandatory warning to myriad potential Trump copycats that serving as a carrier of the political disease known as Trumpism is absolutely not a path to more winning, but a political death wish.

Not to overstate the obvious, but the very existence of this whimpering tyrant in the White House, along with his relentless undermining of liberal democracy, should never have occurred in the first place. But now that he’s here, we have no choice but to swiftly oust Trump and quarantine Trumpism, the style of politics Trump co-opted from decades of Fox News, talk radio and far-right agitprop. Too much time has passed already. Trumpism has to be yanked back now, before it’s too late.

One of the only means of accomplishing this quarantine, hopefully sometime within the coming year, is to burn it into the skulls of Trumpism’s animators that it’s suicide to embrace it — that the resilience of those who cherish stability, magnanimity, traditional norms and the principle that the United States should act as a benevolent superpower will always win in the end.

The republic-consuming virus of Trumpism must be humiliated out of existence. Even the most fanatical Red Hat militants need to feel ashamed to have been flimflammed by this obvious Lionel Hutz-meets-Biff Tannen goon whose résumé includes operating as a four-decade punchline in New York City.

For reasons historians will be sorting out for a long time, Trump’s loyalists mistook the inchoate conniptions of a poseur Fox News pundit for actual presidential leadership — and gave power a political tourist who’s barely equipped to preside over a podcast, much less 2,000 nuclear warheads. Our national reputation as well as our constitutional future hangs in the balance, thanks to this egregious electoral blunder.

It’s a blunder that’s endangered not only American national security, but the national security of our allies, including Ukraine, and that’s just for starters. At its worst, Trumpism has indoctrinated millions of Americans who doubt or outright reject reality, the very existence of empirical fact. Instead, they accept as truth the shriekings of one man whose reputation for corruption and mendacity stretches back to the 1970s — a man who, among other horrendous deeds, just admitted in court that he stole $2.8 million from military veterans, of all people. Defying all things commonsensical, this is their guy, their Chosen One, and they’re willing to burn everything down in defense of this clown.

Consequently, House Democrats aren’t engaged in an impeachment of choice.

Given the stakes — the voluminous record of crimes, unprecedented stunts and defiant incompetence by this president, impeachment is a compulsory law-enforcement action by patriots who gratefully recognize where Trump’s brand of autocratic generalissimo-style leadership is headed if provided too much oxygen.

The public impeachment hearings are designed to be administered by both parties commensurate with the seriousness of the charges. But I think we all know what’s really going to happen, at least on the Republican side.

Broadcast on all of the cable news networks, along with ABC, NBC, PBS and CBS, viewers will observe 45-minute blocks of questions by counsel for each side, or by the chairman and ranking member of the House Intelligence Committee (those would be Adam Schiff and Devin Nunes, respectively). Once these portions of the hearings are wrapped, the individual members of the committee will have a chance to ask their own questions for five minutes each. If the Republican counsel and Nunes don’t sufficiently clown it up before then, that stage of the hearings will more than make up for it.

Wednesday will feature two witnesses: the chargé d'affaires for Ukraine, Bill Taylor, followed by Deputy Assistant Secretary of State George Kent, who each corroborated the account of the CIA whistleblower. In other words, we’re looking at two more whistleblowers whose reputations are beyond reproach, especially now that they’re patriotically subverting the attempted cover-up by their boss, the president.

Taylor, you might recall, provided Congress with the incriminating text messages between himself and EU ambassador Gordon Sondland. His opening statement in the closed-door portion of his testimony included revelations such as naming Rudy Giuliani’s accomplices; telling investigators about Sondland’s insistence that Ukrainian President Volodymyr Zelensky “leave no stone unturned” in helping Trump attack Joe Biden; confirming the extortion attempt (Javelin missiles for dirt on Biden); and Taylor warned that the entire plot effectively “undercut” American foreign policy. He will repeat the same, and more, on Wednesday under oath and on every broadcast TV network.

Incapable of providing exculpatory evidence against the impeachment charges, the House Intelligence Committee’s Republicans, now including Rep. Jim Jordan, himself accused of covering up serial sexual abuse at Ohio State, plan to divert the investigation to their conspiracy theory that Ukraine and the Democrats conspired to frame Russia by self-hacking and blaming the Kremlin for it. Secondary to that, they plan on turning the impeachment of Trump into the pre-emptive impeachment of Joe Biden. Neither angle is a defense of Trump, and no evidence proving their ludicrous pro-Russia theories will be presented, but they don’t need it. The mere accusation is enough to manufacture the desired result.

The goal is simple: If everyone’s guilty, then no one is. By scrambling the board, the Trumpers intend to confuse viewers by making it seem as if it’s just another political pie fight. Confusion, they hope, will lead to ambivalence, which will undermine support for impeachment among on-the-fence Democrats.

You’ll also hear whining from the Republicans and Trump himself that the hearings are stripping the president of his due process rights. This is also a lie. Even though this stage in the impeachment process is akin to a grand jury investigation, with the actual trial occurring in the U.S. Senate when and if Trump is impeached, the rules of the public hearings in Rep. Jerry Nadler’s Judiciary Committee will, in fact, allow Trump to defend himself personally or through counsel — but only if Trump plays by the rules himself. Trump’s fate is in his own flailing hands in this regard.

If Trump actually respected congressional subpoenas as binding, if he weren’t engaged in an obvious cover-up, if he weren’t inviting further impeachment articles by obstructing Congress, the House wouldn’t need such a caveat. This is where Trump’s destruction of norms and institutions will sabotage his defense. On the other hand, if he vows to comply with all subpoenas moving forward, he could personally stomp his way into the hearing room to defend himself. It’ll never happen.

And because I suspect most Salon readers won’t be watching the Fox News telecast of the hearings, it’s worth mentioning that Fox News will likely cut to commercials or roundtable commentary whenever Bill Taylor or George Kent say something particularly incriminating about the president. The Fox News audience has already been suckered by years of the late Roger Ailes’ counterfactual grievance-mongering, so even if the network airs the hearings uninterrupted, the important details won’t be heard over the la-la-la not listening! reaction of the Fox News disciples.

One last thing. When the Republicans act out their love letters to Trump, mocking the very existence of the process, you might see some liberals on social media and cable news demanding that Schiff and the other committee chairs incarcerate the Republicans and/or their witnesses on contempt charges — and if they don’t, they’re weak and ineffectual. Don’t believe any of it. The Democrats are engaged in one of the fiercest actions bestowed upon the House by the Constitution. The lower chamber has only ever approved impeachment articles twice in 243 years, prior to Trump. If that’s not tough enough for some, I’m not sure whether they’ll ever be satisfied. Furthermore, each act of defiance will be added to the roster of impeachment articles, punishing Trump himself for the actions of his subordinates.

Meanwhile, the contrast between the parties will be crystal clear. While the Democrats comport themselves with professionalism and the investigatory seriousness required of such a fierce action, the Republicans will do nothing but act out — performing for an audience of one, their cartoon messiah who doesn’t deserve their self-immolation and would gladly steamroll any one of them if he thought it might help him wiggle out of another pickle of his own making. Nevertheless, Nunes, Jordan and the others will further whore themselves to Trump while degrading what’s left of the now Trump-branded Republican Party.

My desperate hope is that viewers will see this distinction, rather than superimposing the capricious Republican performance art onto both sides, which cable news will do its best to confirm. This isn’t about partisanship or whatever other weak excuse Trump blurts over the blender-on-purée engines of Marine One. This is about taking a first step in a long-term process of mitigating the damage and preserving what’s left of our national dignity.