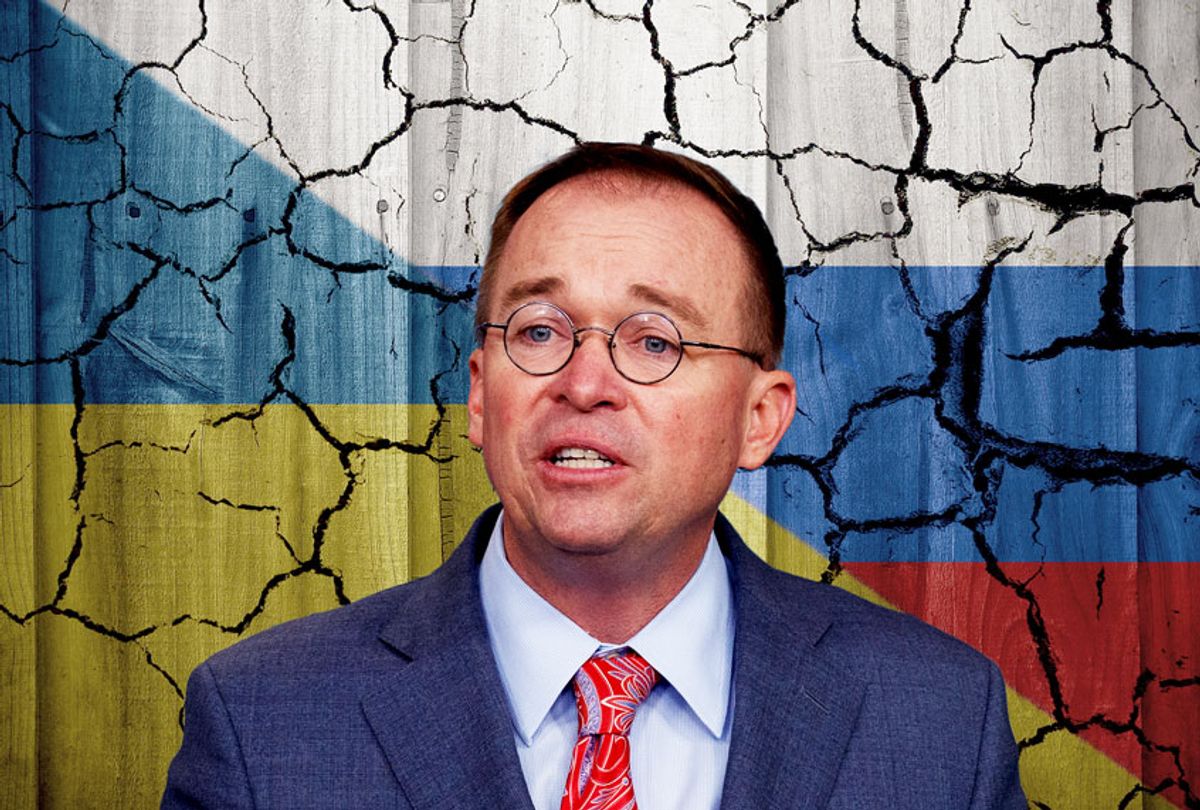 Mulvaney is pulling double duty at the White House, serving at the acting chief of staff as well as the director of OMB. Congress is looking into Mulvaney’s role in the Trump administration’s decision to block nearly $400 million in aid to Ukraine to earlier this year to pressure the country into launching investigations into President Trump’s political opponents. Croft revealed that Mulvaney also played a key role in freezing a shipment of anti-tank missiles to the Ukraine in 2017, more than a year earlier.

Croft, who served on the National Security Council and at the State Department as an expert on Ukraine, called the OMB’s decision to block the aid shipment “highly unusual,” according to a transcript of her testimony, adding that the budget agency was the “lone objector.”

“In a briefing with Mick Mulvaney, the question centered around the Russian reaction,” Croft said.

“What was the concern about the Russian reaction?” a congressional staffer asked her

“That Russia would react negatively to the provision of Javelins to Ukraine,” Croft replied.

Croft added that the hold lasted “about a week or two” despite “all of the policy agencies” involved backing the aid shipment.

“[It] was rather unusual to have OMB expressing concerns that were purely policy-based and not budget-oriented,” she said. “At the beginning of the Ukrainian Javelin process, I had been told that OMB was taking a policy interest. And OMB began sending working level officials to attend meetings ... which was very unusual at the time.”

The Daily Beast, which first reported last month that OMB had blocked the aid last month, found that the agency did not explain to the State Department, the Defense Department or Congress why it froze the aid. “The postponement generated quiet confusion and frustration for months,” the report said.

The OMB’s curious decision to freeze the aid coincided with another curious development in Ukraine. Worried about angering Trump while negotiating for sale of the Javelin missiles, Ukrainian officials shut down four separate investigations into former Trump campaign chief Paul Manafort in a move that seemed intended to “hinder” former special counsel Robert Mueller’s Russia probe, The New York Times reported. A former Ukrainian prosecutor told the Times that top officials “concluded on their own that any help prosecuting Manafort could bring down Trump’s wrath.”

“Near the end of 2017, just as the government in Kiev was trying to get final approval from the Trump administration on the sale of the Javelin anti-tank weapons, [Ukraine’s] prosecutor general, Yuriy Lutsenko, had begun freezing cases in Ukraine relevant to the Mueller investigation, including an inquiry tracing millions of dollars that Ukrainian political figures paid to Mr. Manafort,” the Times reported.

OMB ultimately dropped its objection and the missiles were sent to Ukraine.

Years later, the Javelin missiles played an important role in the July 25 phone call between Trump and Ukrainian President Volodymyr Zelensky, which is at the heart of the impeachment inquiry.

“We are ready to continue to cooperate for the next steps. We are almost ready to buy more Javelins from the United States,” Zelensky told Trump, just before the president brought up his demand for Ukraine to launch an investigation into the 2016 election.

Trump famously replied, “I would like you to do us a favor though.”