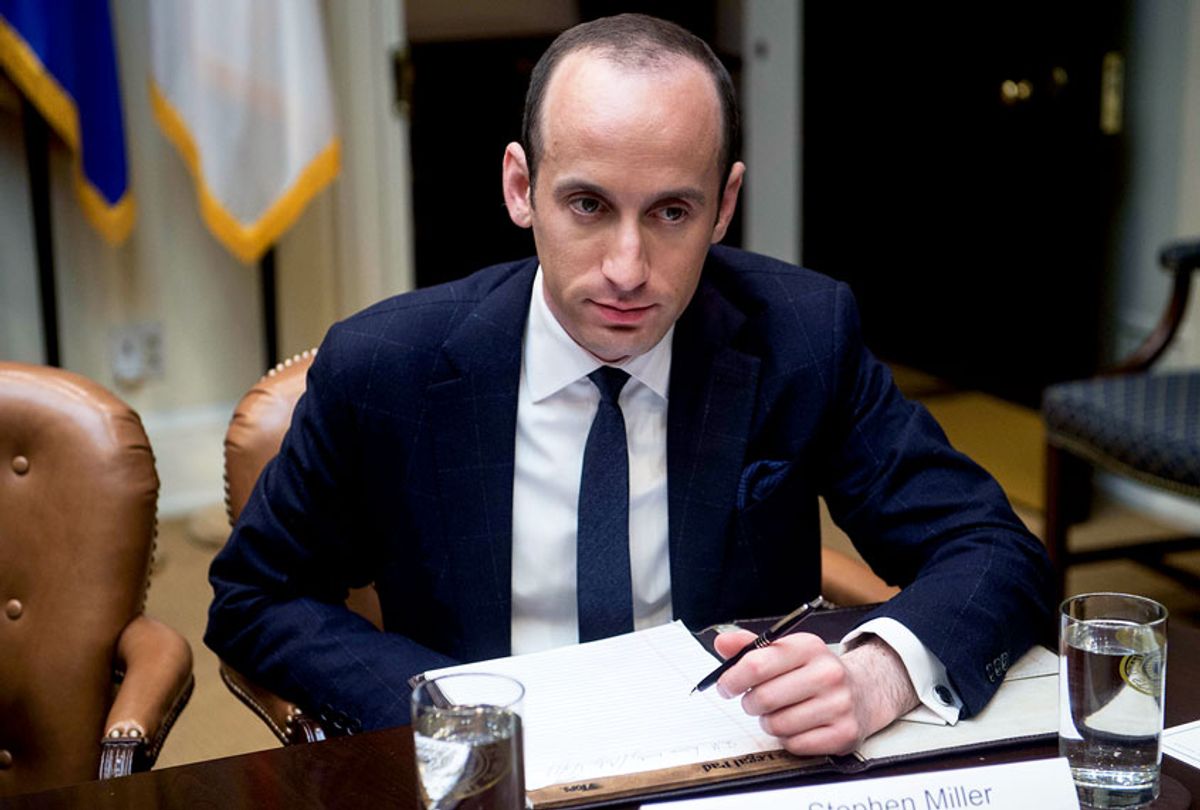 White House adviser Stephen Miller sent dozens of emails that included materials from an organization labeled an anti-immigrant “hate group” by the Southern Poverty Law Center, according to a trove of leaked emails obtained by the organization.

Miller sent at least 46 emails related to materials or employees of the think tank Center for Immigration Studies (CIS) to former Breitbart editor Katie McHugh between 2015 and 2016, according to emails which she turned over to the civil rights nonprofit. CIS was labeled a “hate group” by the organization in 2016 over its “decades-long history of circulating racist writers, while also associating with white nationalists.”

McHugh, who was fired from Breitbart in 2017 over an anti-Muslim tweet and later denounced the far-right, turned the emails over to the SPLC. The organization previously reported that Miller pushed McHugh to cover stories promoted by the white nationalist site VDARE and the white supremacist site American Renaissance and urged her to emphasize crimes committed by people of color.

Meredith Shiner, a former reporter who covered Congress at Roll Call and Yahoo News, claims that Miller’s “racist” emails were no secret around Washington media circles, but reporters simply “normalized them.”

“Here’s the unspoken secret about Stephen Miller’s emails,” she tweeted. “Any reporter who covered DC in 2013 (and many who did still are), received multiple unhinged, racist screeds per week from Miller and about immigration when he was [former Alabama Sen. Jeff] Sessions’ spokesman. Direct to THEIR inboxes.”

“The racism from Sessions and Miller was normalized then by the press corps because it was the ‘opposing side’ to a bipartisan bill that passed the Senate,” she wrote.

McHugh told the SPLC that she believes Miller’s views continue to be normalized, this time by the president.

"What Stephen Miller sent to me in those emails has become policy at the Trump administration," she said.

McHugh turned over more than 900 emails Miller sent to her and other Breitbart editors in the lead up to the 2016 election. Michael Edison Hayden, the SPLC reporter who reviewed the emails, wrote that “more than 80 percent” related to “the subjects of race or immigration.” Miller’s emails often focused on “offenses committed by nonwhites,” with Hayden writing that he was “unable to find any examples of Miller writing sympathetically or even in neutral tones about any person who is nonwhite or foreign-born.”

The second part of Hayden’s report revealed that Miller sent at least 46 emails related to CIS material or employees to McHugh over a 10-month period and repeatedly “offered CIA research material to McHugh for her reporting.”

Miller emailed one CIS report with the email subject line, “Huge Surge in US newborns named 'Mohammed.’” That line was later included in a Breitbart headline on an article about the report.

Many of the emails helped craft Breitbart’s coverage of immigration issues.

“We used [CIS material] to spin a narrative where immigrants of color were not only dangerous, violent individuals but also posed an existential threat to America,” McHugh told the SPLC. “We never fact-checked anything. We never called up other organizations to get any other perspective about those studies . . . It was understood. You just write it up.”

Miller’s ties to CIS are no secret. Miller was the keynote speaker at a CIS event in 2015, where he praised the group for its work to “illuminate a debate that far too often operates, like illegal immigrants, in the shadows.”

A 2017 investigation by the SPLC and the Center for New Community found that CIS sent “sent white nationalist content to readers more than 2,000 times across nearly 10 years as a part of its weekly email blasts.” That number included more than 1,700 links from VDARE and American Renaissance, both sources Miller linked to directly in his emails to McHugh. Many of the CIS reports were authored by Jason Richwine, who was forced out of the Heritage Foundation in 2013 after it was revealed that his Harvard University dissertation argued that Hispanic people have lower IQs than white people.

Despite these ties, the influence of CIS soon extended from Breitbart to the White House after Miller joined the Trump administration. An NPR report on President Donald Trump’s proposed travel ban on Guatemala revealed that Jessica Vaughan, the director of policy studies at CIS, “speaks regularly with the administration.”

The administration also invited CIS Executive Director Mark Krikorian to a meeting with Trump about his proposed border wall. Krikorian told C-SPAN earlier this year that the White House has reached out to the group to seek their input on policy.

“Usually, we get requests about, you know, ‘Is this a good idea?’ or ‘Do you have research on XYZ?’ That sort of thing,” he said.

Several months after the C-SPAN interview, Krikorian praised the terrorist manifesto of the mass shooter who targeted Hispanic people at an El Paso Walmart as “remarkably well-written for a 21-year-old loner” to The Washington Post.

“If you have a guy who is going to be angry about immigration, have a killer offering reasons for shooting up immigrants, how could he not use reasons that have already been articulated by legitimate sources?” he said at the time.

The White House has not commented on the contents of Miller’s emails and instead claimed that the SPLC, a respected civil rights nonprofit, was an “utterly-discredited, long-debunked far-left smear organization,” even though the emails were leaked by McHugh.

Many Democrats have called on Miller to resign after the emails leaked, citing them as evidence that the Trump adviser was a “white nationalist.” Former HUD Secretary Julian Castro labeled Miller a “Neo-Nazi.”

But a White House official insisted to Axios that Miller was the real victim.

"This is clearly a form of anti-Semitism,” the unidentified official told the outlet, “to levy these attacks against a Jewish staffer."