"Now is the time to demand what we need, not what we think might be feasible." 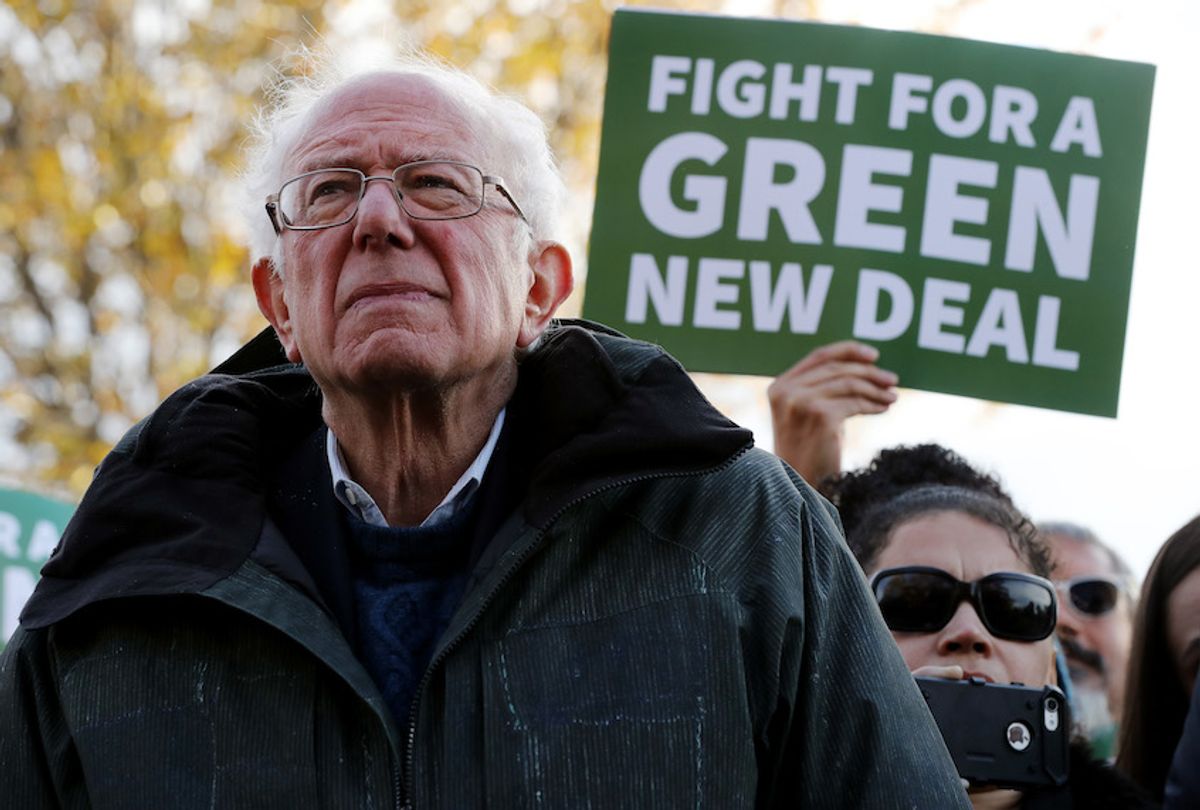 The New York Times sparked fierce backlash from environmentalists Friday for publishing a news story that leads with a matter-of-fact comparison between Sen. Bernie Sanders' plan to finance the Green New Deal by taxing and fining the fossil fuel industry and President Donald Trump's claim that Mexico would pay for the construction of a border wall.

"Sanders' $16 trillion vision for arresting global warming would put the government in charge of the power sector and promise that, by 2030, the country's electricity and transportation systems would run entirely on wind, solar, hydropower, or geothermal energy, with the fossil fuel industry footing much of the bill much as Mexico was to pay for the border wall," wrote Times climate reporter Lisa Friedman in her article's opening paragraph.

Friedman appeared to be referring to the portion of Sanders' sweeping Green New Deal proposal that calls for "making the fossil fuel industry pay for their pollution, through litigation, fees, and taxes, and eliminating federal fossil fuel subsidies" — which constitutes just one part of Sanders' plan to finance the Green New Deal.

Critics were quick to condemn the notion that Sanders' call for taxes and fines against big oil is in any way on par with Trump's farcical insistence that Mexico would foot the bill for his proposed wall on the southern border.

"The difference? The [fossil fuel] industry owes Americans and global community an uncountable debt for poisoning our communities," tweeted Isa Flores-Jones, a press fellow with the youth-led Sunrise Movement. "Not to mention all those billions of dollars in subsidies owed to the American people. Which brings us to a daily reminder that we pay FF industry $5.2 trillion a year to destroy us."

Progressives didn't merely have a problem with the opening paragraph of the Times story.

The headline of the article states that "experts aren't impressed" by Sanders' ambitious Green New Deal plan, which calls for a 10-year mobilization to transition the U.S. economy to 100 percent renewable energy.

But as the left-wing magazine Current Affairs and others pointed out on Twitter, the "experts" cited by the Times include an adviser to South Bend, Indiana Mayor Pete Buttigieg, a business professor and maxed-out Hillary Clinton donor, and a Democratic strategist who does public relations work for the chemical industry.

"This is pure propaganda, nothing whatsoever to do with science," tweeted Current Affairs. "If you want a scientific assessment have climate scientists evaluate the plan. Pretty galling that the New York Times doesn't disclose the obvious political biases of its sources."

Meteorologist Eric Holthaus tweeted that the "experts quoted here get it wrong."

"The Bernie Sanders GND is the only federal climate policy ever proposed in line with what [Intergovernmental Panel on Climate Change] scientists say is necessary: 'transformative change' in 'all aspects of society,'" said Holthaus. "If experts don't agree with that, they're not experts."

In a series of tweets Friday, Sunrise Movement political director Evan Weber said the Times "article misses a key 'expert' perspective: The climate scientists who are saying we need to radically transform every aspect of our economy in the next decade if we want even a 50 percent chance of averting catostrophic climate crisis."

"As someone who spends almost all of his time straddling policy experts, political strategists, and social movements... I'm incredibly disappointed but not surprised by this article," Weber wrote. "Where has 'reasonable and measured' gotten us in the last 40 years? It's gotten us to the point of societal extinction. Now is the time to demand what we need, not what we think might be feasible."

"Fossil fuel CEOs didn't hold back for fear of it being 'impossible' for them to get away with cooking the planet for decades," said Weber. "We need to be as relentless as our opponents."