Neptune's moons tiptoe around each other to avoid collision 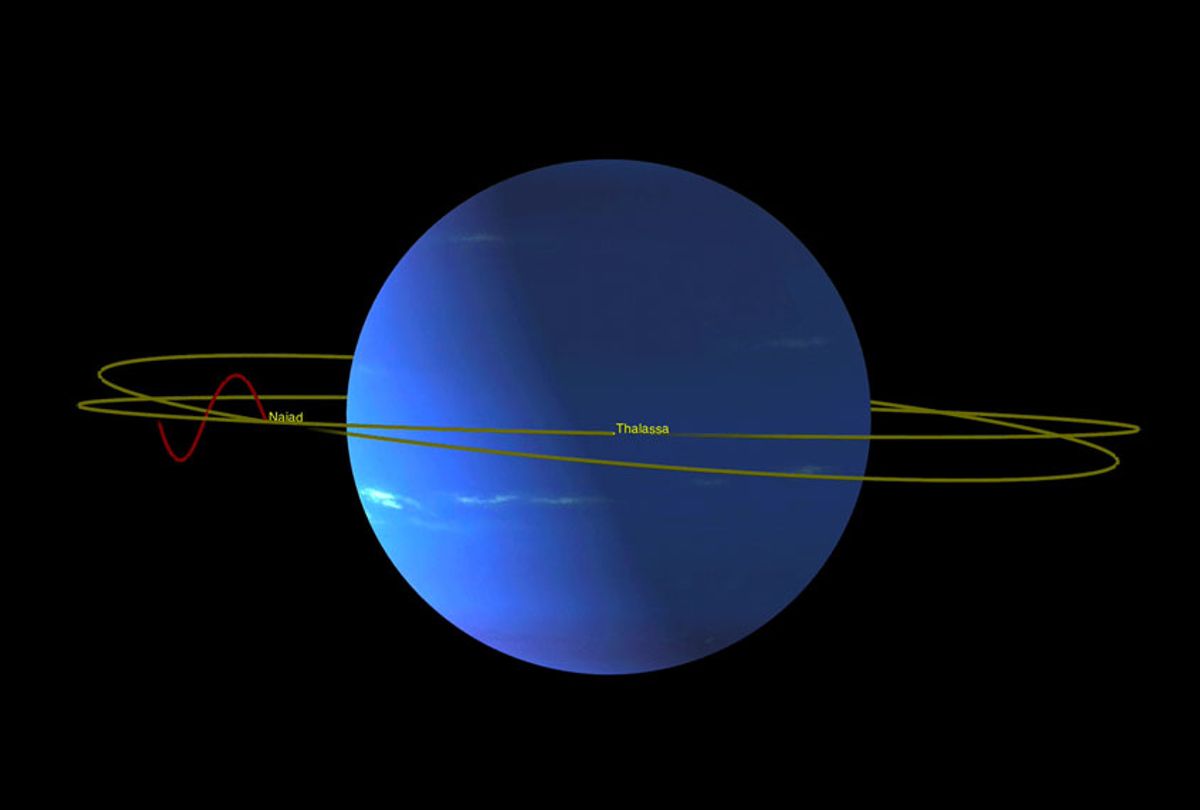 Neptune's inner moons Naiad and Thalassa enable them to avoid each other as they race around the planet. (NASA)
--

It takes two to tango, or so they say of humans. It turns out the same can be said about a neighboring planet's moons.

According to new research published in the journal Icarus last month, two of Neptune’s tiny moons — Naiad and Thalassa — orbit in an unprecedented way that scientists are calling a "dance of avoidance.” The study calls the two moons "partners," noting that though they orbit only about 1,150 miles apart — approximately the distance from San Diego to Seattle — they never get close enough to touch each other.

“The big picture is that moons don't like to get too close to each other when they orbit a planet,” Mark Showalter, a planetary astronomer at the SETI Institute and a co-author of the new paper, told Salon. ‘They are much more stable if they don't get too close, and what we found is two moon going to extraordinary lengths just to avoid each other.”

Naiad's orbit is tilted and perfectly timed to pass its slower-moving partner, Thalassa, while maintaining a distance of about 2,200 miles apart. During this so-called dance of avoidance, Naiad circles Neptune every seven hours. Thalassa takes seven and a half hours. According to the researchers, the orbit would look like an up-and-down zig-zag pattern to an observer.

"We refer to this repeating pattern as a resonance," Marina Brozovic, an expert in solar system dynamics at NASA's Jet Propulsion Laboratory in Pasadena, California, and the lead author of the new paper, said in a media statement. "There are many different types of 'dances' that planets, moons and asteroids can follow, but this one has never been seen before."

This peculiar pattern was discovered as researchers analyzed observational data from NASA's Hubble Space Telescope. The research provides the first insights of their kind regarding the internal workings of Neptune’s inner moons.

Researchers also found that the relationship between these two moons not only one is tilted, Showalter said,  but the number of orbits are peculiar, too. Naiad orbits Neptune 73 times for every 69 times that Thalassa goes around  Neptune.

Neptune has 14 moons that we know of today. Neso, the farthest of them all, orbits in an elliptical loop nearly 46 million miles (74 million kilometers) away from the planet. This journey takes 27 years to complete. Researchers suspect that Naiad joined Neptune after an interaction with another one of Neptune’s inner moons.

"We suspect that Naiad was kicked into its tilted orbit by an earlier interaction with one of Neptune's other inner moons," Brozovic added. "Only later, after its orbital tilt was established, could Naiad settle into this unusual resonance withThalassa."

Indeed, the finding was surprising, and pleasant, for researchers.

“For me it's always exciting to see the universe comes up with crazier solutions to a problem than we humans might think of,” Showalter said. “It’s a freakishly weird configuration."