They say Trump lies. They say he's racist. But they still won't call him out for misogyny

We all understood the sexist subtext of Trump's tweets about Marie Yovanovitch. So why won't reporters say so? 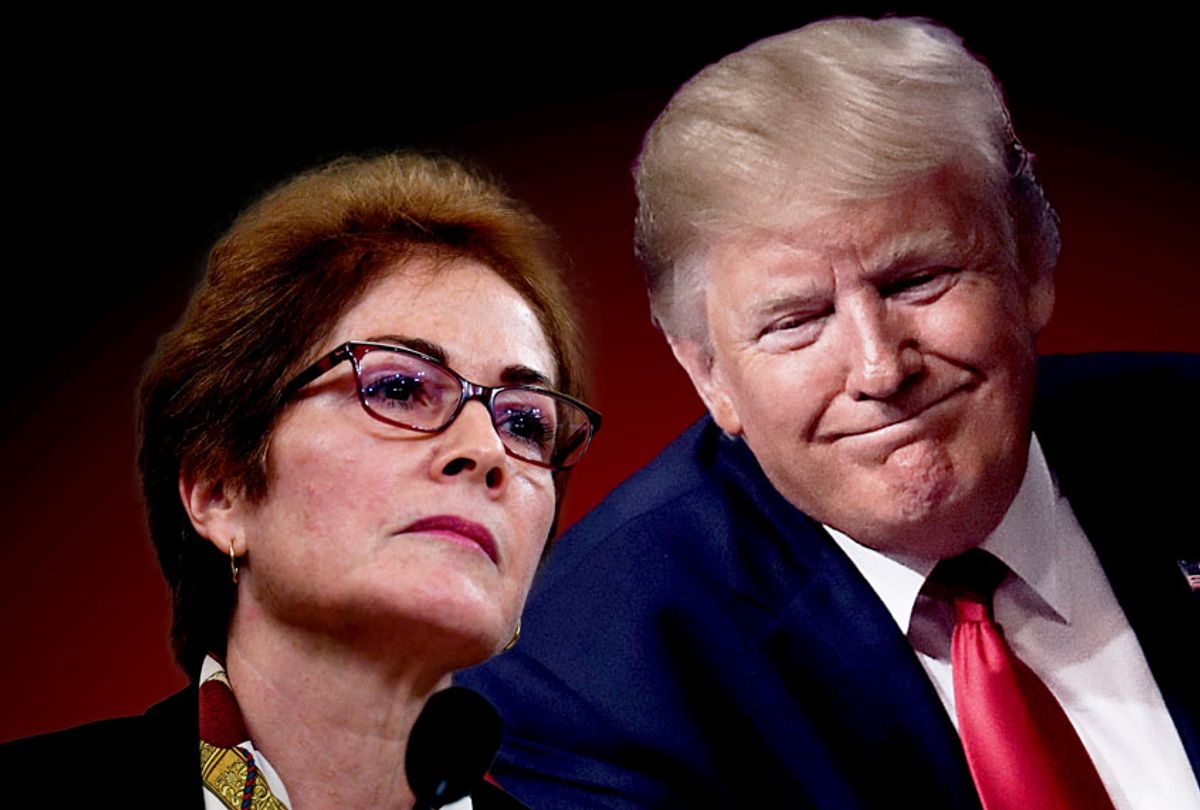 Donald Trump’s Twitter assault on former U.S. ambassador to Ukraine Marie Yovanovitch, coming even as she testified on Capitol Hill on Friday about feeling threatened by his earlier attacks, was notable not just because it was an act of witness intimidation in plain view and real time.

It was also the latest obvious example of how easily Trump is triggered by strong women who don’t let him have his way — and how personally and viciously he lashes out at them.

For many observers, the misogynistic nature of Trump’s tweet — where he seemed to blame Yovanovitch for the geopolitical disasters she was sent to ameliorate — was hard to miss.

On MSNBC, the significance of Yovanovitch’s gender to Trump’s attack was an immediate topic of conversation, with journalism and political science professor Jason Johnson, among others, calling the tweet revealing of how Trump treats women.

Rep. Jackie Speier, D-Calif., a member of the House Intelligence Committee, put the new tweet in historical context, writing that “When POTUS refers to Yovanovitch — a senior diplomat with 33 yrs in public service – as ‘the woman’ & ‘bad news’ to a foreign head of state, we all know what that means. His misogyny has no limits.”

(During Trump’s now-famous July 25 phone call with the Ukrainian president, Trump raised the topic of Yovanovitch by saying: “The former ambassador from the United States, the woman, was bad news,” and then adding: “She’s going to go through some things.”)

It’s interesting to me that Trump was basically able to stay away from attacking Taylor and Kent in personal terms on Wednesday. But he couldn’t stay away from the Twitter feed when a woman is testifying.

The president’s advisers often insist claims that he is making gendered criticisms are unfair. But this is just a fact that he didn’t do this about Kent and Taylor but is being deeply personal about Yovanovitch.

But those were all spontaneous, human reactions.

I don’t expect much, if any, of the clearly misogynistic nature of Trump’s attack to make it into the news reports produced by our major news organizations.

That’s because political reporters don’t write from the heart. They run their thoughts and observations through a series of familiar filters and algorithms to create a work product that conforms to certain expectations, chief among them that you don’t take sides.

But that expectation is highly limiting — one might even say self-censoring — in the Trump era.

Calling out misogyny is outside reporters' comfort zone.

But the same news organizations that have finally developed the fortitude to call some things Trump does racist, and to call many things he says lies, still can’t bring themselves to say that when he attacks women with exceptional rhetorical violence and contempt, it’s because he harbors a deep and abiding terror and hatred of women.

As of this weekend, it was still crickets from our major news organizations. But kudos to author Molly Jong-Fast, who noted in an Atlantic opinion piece that “It’s almost as if the president is unable to control his rage against women.”

News organizations don’t avoid the issue entirely. For instance, on Friday morning, just before the Yovanovitch hearing, the Washington Post ran a front-page story by Elise Viebeck about the “complicated gender and political dynamics” around Yovanovitch’s removal.

But Viebeck wrote about what she called Trump’s use of “gender-specific language to attack women he perceives as threatening,” rather than calling it out as misogyny.

She noted some memorable examples:

Women who criticize him are “nasty.” He called adult-film star Stormy Daniels, who alleged an affair with Trump, “Horseface” last year. After then-Fox News host Megyn Kelly, during a 2015 presidential primary debate, posed a question about his language toward women, he said she had “blood coming out of her wherever.”

But rather than reach a hard-hitting conclusion about what that meant, Viebeck simply noted that women would be watching.

Incidentally, when it comes to angry sexism, Trump is hardly alone. As the Washington Post reported, Rep. Lee Zeldin, R-N.Y., accused Democrats on Wednesday of asking Yovanovitch questions about her feelings because they wanted to make her cry.

“The reason why that 45 minutes was spent asking her about her feelings is because House Democrats wanted to recreate what happened in the depositions, they wanted her to cry for the cameras,” Zeldin told reporters.

Justin Baragona wrote in the Daily Beast that Fox News host Sean Hannity, right-wing radio host Rush Limbaugh and the Federalist’s Sean Davis all predicted that Yovanovitch would cry on camera for effect.

For a long time before Trump, newsrooms avoided characterizing statements as being lies, or as overtly racist. The argument was that reporters couldn’t know with certainty what a speaker’s intent was. More recently, however, newsroom leaders have let those qualms fade away under the extraordinary volume and repetition of otherwise inexplicable statements from Trump and other Republicans that made the intent pretty damn obvious.

But those same newsroom leaders seem unable to acknowledge the influence, severity and scope of misogyny, either in our president or in our nation. I’ve argued for years that every major newsroom in America should have a misogyny beat. But even after the 2016 election, where misogyny was a huge factor, I see little progress. It’s a topic I plan to return to repeatedly here at Press Watch.