Trump's still pushing the CrowdStrike conspiracy theory: But why, and where did it come from? 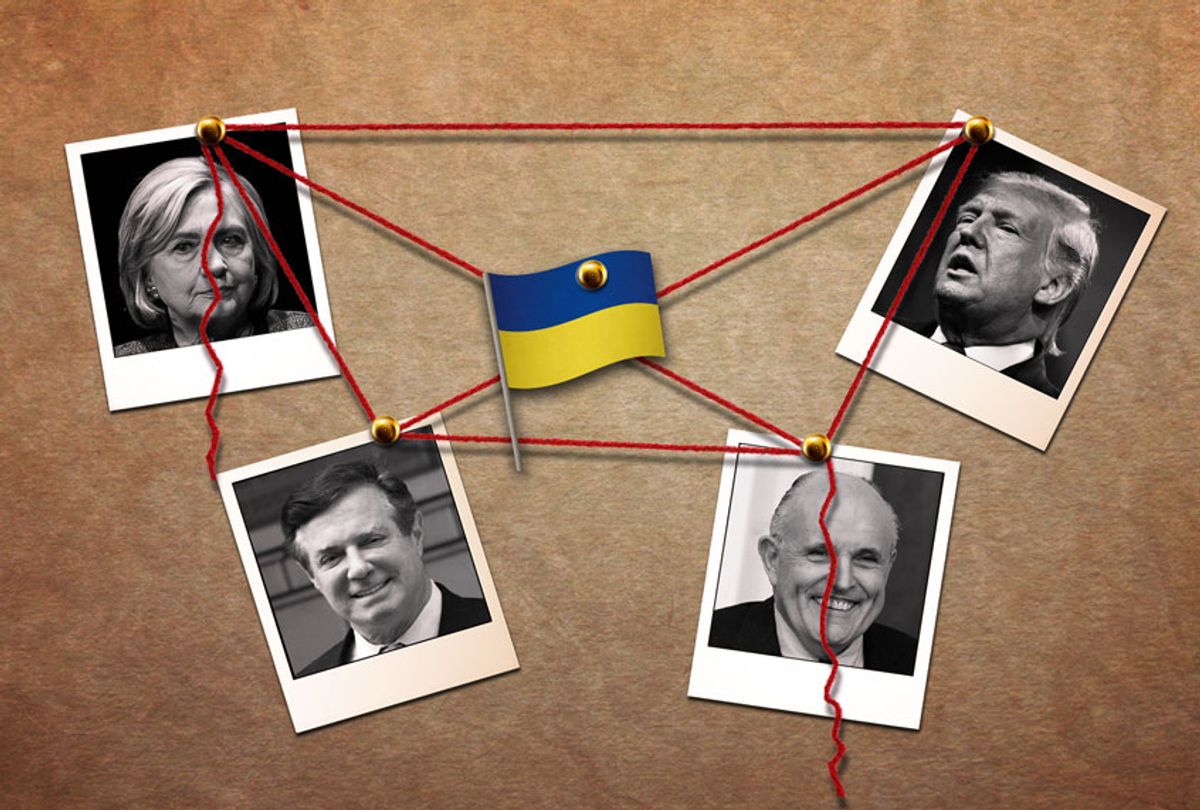 Last week, the Republicans on the House Intelligence Committee shoehorned into the permanent record of the impeachment inquiry a conspiracy theory about the “real” attackers against the 2016 election. This defiant linkage to agitprop of dubious origin was yet another chapter in the GOP’s hopeless descent into complete make-believe.

Before we dig into the madness, there’s a history here that needs to be underscored, since the Republican appetite for crapola didn’t quite begin with Donald Trump.

For example: in addition to disconnecting itself from science and evidence-based reality long ago — in the name of manufacturing an ignominious alliance with right-wing evangelicals in the early 1980s — the modern GOP has repeatedly accepted as real the continuing series of selectively edited prank videos by James O’Keefe and his copycats.

O’Keefe’s work has been debunked by every fact-checking organization around. The hidden-camera videos infamously appear to show workers with left-leaning organizations like ACORN incriminating themselves, but only because they've been deceptively edited to mislead viewers, stitching together outrageous allegations against the targets.

Most recently, David Dalieden, the video scammer who attempted to frame the Planned Parenthood Federation of America (PPFA), was forced to pay $2.2 million to the organization after falsely accusing PPFA of selling aborted fetal tissues on the black market. More than a dozen state investigations followed, and each one, including in red states like Florida, North Dakota and Texas, found zero wrongdoing on behalf of Planned Parenthood. It turns out PPFA routinely donated tissues to medical research facilities in pursuit of cures for Alzheimer’s, Parkinson’s and other diseases. PPFA merely requested compensation for shipping expenses.

Reality, however, didn’t stop the Republicans from using the fake video as a pretext for voting to de-fund PPFA, just as they did with ACORN and others. Now, it’s an undeniable fact that the modern Republican Party openly legislates based on obvious forgeries — prankster footage that’s about as serious as videos starring Johnny Knoxville and Bam Margera.

It’s no wonder Donald Trump and the Republicans on the House Intelligence Committee have tethered themselves to another ludicrous conspiracy theory, one that originated with a nefarious source.

The new-ish Trump Republican theory about Ukraine and the Democratic National Committee goes like this: The Democrats teamed up with the cyber-security firm CrowdStrike to hack the DNC server in 2016 in order to frame Russia, while also somehow sabotaging Trump’s campaign. A key component to this theory is the false claim that CrowdStrike’s founder, Dmitri Alperovitch, is Ukrainian.

According to witnesses in the impeachment inquiry, Trump and his lackeys attempted to extort from Ukraine an investigation into both the Bidens and the CrowdStrike allegations in exchange for U.S. military aid necessary to help fight off the Russian invaders in the eastern Donbass region.

Not surprisingly, the CrowdStrike theory is 100 percent, unpasteurized nincompoopery. (Reportedly, Ukrainian President Volodymyr Zelensky didn't know what Trump was talking about; his aides had to look up this nonsense on the internet.)

It’s also worth noting that CrowdStrike was the firm that initially discovered the hacking of the DNC, as well as the other fronts of the attack, which was conducted by the Russian military intelligence agency, the GRU, as well as the St. Petersburg-based Internet Research Agency, each acting on orders from the Kremlin. (Both those entities were later indicted by Robert Mueller's prosecutors.) Here's another fact that undermines CrowdStrike’s alleged relationship with the Democrats: The firm was also hired by the National Republican Congressional Committee after a hacking attempt during the 2018 midterms.

To be clear, the Russian attack against the 2016 election has been unequivocally confirmed by all 17 U.S. intelligence agencies, the Mueller report, and the Senate Intelligence Committee, chaired by Sen, Richard Burr, a North Carolina Republican.

Not one reputable organization has debunked or even disputed the fact that Russia attacked the 2016 election in order to help Donald Trump win the election — other than Trump and his Republican Party, of course, neither of which can be considered “reputable.”

Making matters worse, according to the intelligence community and Burr’s Senate committee, as well as both FBI Director Chris Wray and Robert Mueller, each during sworn testimony, the Russian attack against our national sovereignty and the integrity of our electoral system is ongoing and aimed squarely at the 2020 election as well.

The origins of the theory

How did this conspiracy theory begin? The answer to that question serves to further highlight the absurdity of it all.

It comes as no surprise that it all began with a former student of the Russian GRU and infamous Paul Manafort fixer, Konstantin Kilimnik, back in the summer of 2016. According to testimony by indicted Manafort co-conspirator Rick Gates, the Ukraine-CrowdStrike counter-narrative was being developed and pitched around by Manafort while he was still serving as Trump's campaign chair. He was told about the theory by Kilimnik. Gates also testified that Michael Flynn, Trump’s former national security adviser, who has since pled guilty for lying to the FBI, also marketed the theory.

According to the FBI’s memo of Gates’ April 2018 interview, Gates told Mueller’s office that the idea that Ukraine was involved was a theory pushed by Konstantin Kilimnik, another longtime associate of Manafort; Kilimnik is a dual citizen of Russia and Ukraine, according to the Washington Post. Kilimnik also suggested that the DNC hack could have been carried out by Russian operatives in Ukraine, Gates said.

Manafort and Flynn, acting on orders from Kilimnik, were apparently the first Americans to mention this theory.

Kilimnik, who was also indicted by Mueller’s prosecutors, was born in Soviet-era Ukraine and attended a Moscow academy run by the GRU before joining the International Republican Institute. In the context of the Trump-Russia scandal, Kilimnik served as a runner between Manafort and Oleg Deripaska, a Russian oligarch and Putin ally who is a key figure in the investigation. You might recall news of Manafort’s effort to provide internal Trump campaign polling data to Deripaska. The data was offered to Deripaska via Kilimnik as part of an attempt by Manafort to “get whole” — to repay debts owed to Deripaska, apparently.

From a strategic point of view, the Kremlin’s scheme to exonerate itself, including this cockamamie theory about Ukraine and CrowdStrike, is a matter of economics. Punitive sanctions as a collective consequence of Russia’s invasion of eastern Ukraine, its annexation of Crimea and the attack on the 2016 election are wreaking havoc with the already minuscule Russian petro-economy, not to mention Putin’s kleptocracy. So, deflecting the blame onto Russia’s enemy, Ukraine, is a move to justify the easing of sanctions, and thus to improve Russia’s GDP as well as its foothold in Ukraine and eastern Europe.

For Trump, the benefits of the conspiracy theory are myriad. Primarily, as the president continues to indulge the Kremlin by further declaring his fealty to Moscow over his own intelligence community, he’s also redirected his compliant attorney general, Bill Barr, to overwrite evidence of the Russian attack with bogus evidence of an alleged Ukrainian attack. Trump also gets to frame the Democrats as the real plotters, the real election attackers with the help of the “deep state,” augmenting his “swamp” metaphor and, more importantly, tweaking the under-siege victimhood complex of the Red Hat cult.

In the context of the impeachment inquiry into the Ukraine extortion plot, Trump has obviously handed down strict marching orders to his disciples in Congress, including Jim Jordan, Mark Meadows, John Ratcliffe and Devin Nunes, each of whom are crow-barring this theory into the record of the impeachment proceedings. The orders from Trump are apparently to push the CrowdStrike nonsense, while derailing the investigation into Trump’s extortion plot.

Indeed, many of the biggest names in the Republican Party, along with Fox News and the red hat entertainment complex, are busily selling malevolent pro-Kremlin propaganda to American voters over the conclusions emerging from two branches of our own government. Not only that, but Trump’s unspoken accord with Vladimir Putin is actively subverting the cause of democracy and anti-corruption efforts in Ukraine, just as that nation is under attack by Russian invaders.

If Putin wins in Ukraine, eastern Europe will be next on his target list.

We have no choice but to question the patriotism of every American involved with this gibberish. It never ceases to confound logic how these Trump Republicans are so tenaciously circling their wagons around a goofus like Trump, a mentally unfit clown who’s frantically huffing and puffing aboard his dictator’s treadmill. What, exactly, is motivating these fanboys to stake their reputations and the political future of their party, not to mention the very destiny of freedom in Ukraine, all in the name of defending the former host of "Celebrity Apprentice," whose presidency is rapidly vaporizing itself? The possible answers to this question are chilling, especially knowing the Russian origins of too many plot points orbiting the story.

When this is all over, there has to be a reckoning. When Trump leaves office, certain members of the press will attempt to rehabilitate the Trumpers, while many Red Hats will deny ever having supported Trump in the first place. We can’t let them get away with it. They can’t simply walk away from this damage without commensurate accountability. It’s one thing to be loyal to a president, it’s another thing to erase the proof of an invasion by a hostile foreign power, replacing it with viral agitprop conceived by the invader, in the service of that loyalty.