Who is behind the right-wing Bolivian botnet?

After a violent coup in Bolivia, Twitter bots tried to nudge Americans to the side of the Bolivian far-right

By Keith A. Spencer - Nicole Karlis 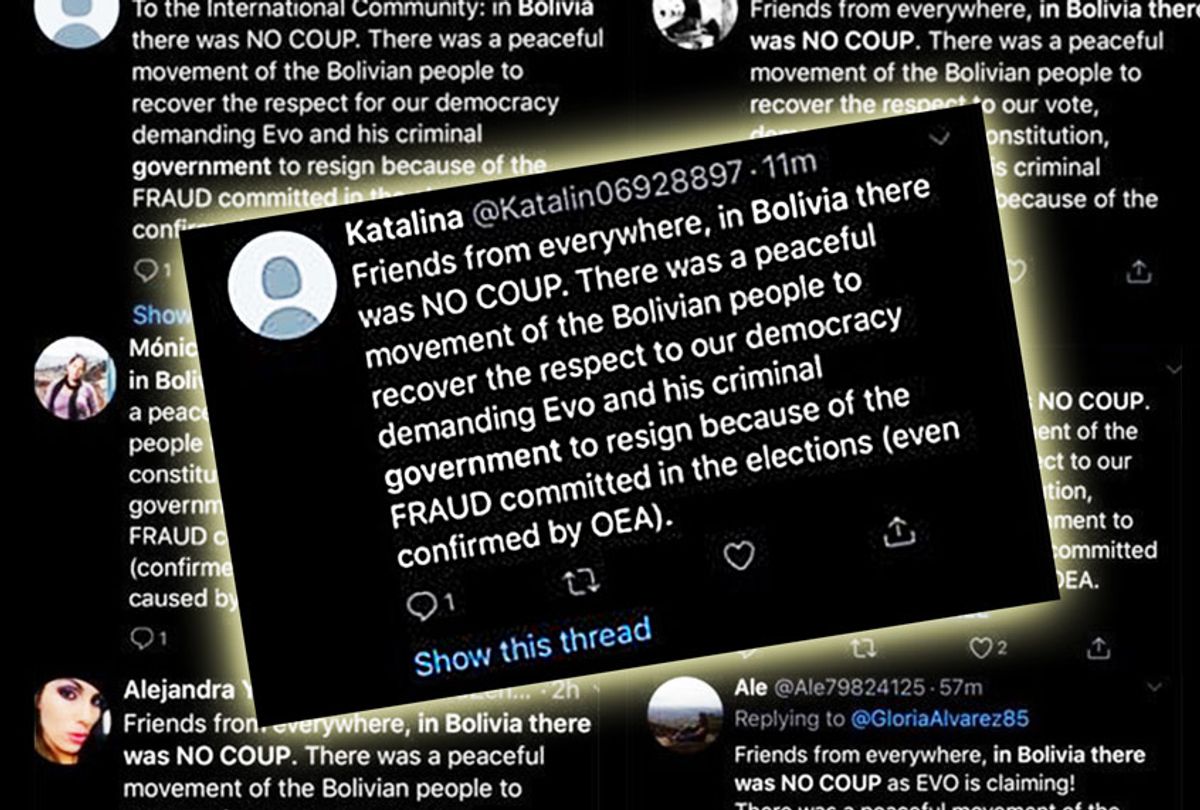 After Bolivian left-populist leader Evo Morales won what would have been a fourth-term, trumped-up accusations of manipulation trumpeted by the right-wing opposition led to violent protests in the streets of Bolivia. Shortly thereafter, Morales’s right-wing opposition and their paramilitary bands began setting fire to the homes of members of Morales’ party, Movement Toward Socialism (MAS), which eventually led to Morales resigning in fear, hoping it would stop the violence. President Donald Trump called the resignation “a significant moment for democracy in the Western Hemisphere”; many in Latin America called it, more accurately, a right-wing coup.

“We resign because I don’t want to see any more families attacked by instruction of Mesa and [opposition leader Luis Fernando] Camacho,” Morales said. “This is not a betrayal to social movements. The fight continues. We are the people, and thanks to this political union, we have freed Bolivia. We leave this homeland freed.”

Many of the right-wing rioters directed their fury at the indigenous peoples of Bolivia, and the police mutinized against the counter-protesters. Despite having all the clear signs of a right-wing coup, much of the Western press has been avoiding using that term.

Morales was, by all accounts, a good president. Poverty was halved in Bolivia during his reign; health care spending went up, as did literacy; and the minimum wage more than doubled. Sadly, what happened to Morales was not a surprise. Historically, effective, democratically-elected leftist presidents in Latin American countries have been undermined and forced out by American-led coups organized by the CIA, including previously in Bolivia in the 1960s.

The American hand in this coup is quite clear. Earlier in November, the Bolivian media outlet Erbol published leaked audio that showed Bolivian opposition leaders discussing “a plan for social unrest, before and after the general elections, with the aim of preventing President Evo Morales from remaining.” In the audio, one opposition leader mentioned being in contact with US senators Marco Rubio, R-Fla., Bob Menendez, D-N.J., and Ted Cruz, R-Tex.

The new leader of Bolivia, Jeanine Áñez, who was the second vice president of the Bolivian senate, declared herself interim president on Nov. 12 after Morales resigned. Within her first week, Anez issued a presidential decree giving security forces immunity from prosecution for being complicit in murdering or assaulting counter-protestors; at least 18 have been killed so far, reportedly all indigenous.

Experts speaking to The Verge assured their reporter that it was the work of a bot, since many of the automated tweets were being tweeted to or in response to verified users, to give them maximum visibility. Twitter has removed some of the tweets, but many still remain. According to The Verge, the first message was posted on Facebook; variations have been seen on Reddit and 4Chan, too.

Michael Schmidt, who studies inauthentic activity on social media, who helped The Verge track down the beginning of the movement said many factors suggest it is an automated movement.

“My guess is that they used the polarizing events of the election to cause hysteria by pumping this post via a bot network. That is 100% true. This is a bot network. No doubt,” Schmidt said. “The real question is who is behind it.”

Speculation online ran rampant as to who was behind the messaging. Some tweets had location stamps that indicated Virginia, the home of the CIA, which many users found suspicious.

“The culprit could be Russia, the USA, or even a kid in his bedroom that just wants to stir the pot,” Schmidt said.

American intelligence agencies have a history of working to build American consent for supporting dictatorships. Likewise, social media bots have been known to meddle in elections around the world and spread disinformation — but of course, there is always a human behind bots.

Research shows the problem is only worsening, and such political manipulation could be more common than we thought.

“Government agencies and political parties around the world are using social media to spread disinformation and other forms of manipulated media,” Professor Philip Howard, Director of the Oxford Internet Institute, University of Oxford said in a statement. “Although propaganda has always been a part of politics, the wide-ranging scope of these campaigns raises critical concerns for modern democracy.”