Is there a risk of “Friends” anniversary overkill?

Does it feel like nostalgia's stuck in second gear? It hasn't been a day, a week, a month ... it's been all year! 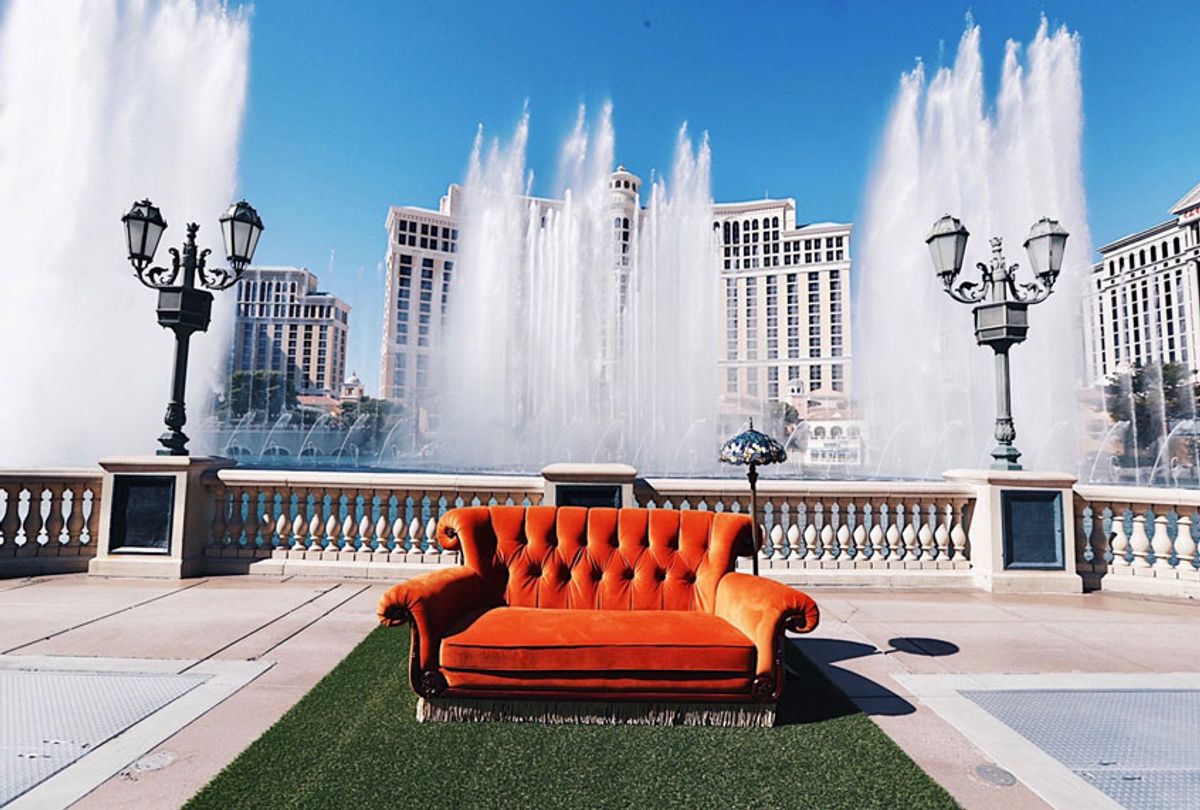 You may have heard that the sitcom “Friends” celebrated its 25th anniversary in September. To pay homage to the sitcom about six attractive pals in New York, various monthlong events marked the milestone, ranging from a worldwide orange couch tour to an elaborate pop-up experience in New York. Even the Empire State Building and Burj Khalifa got into the action.

That hoopla was accompanied by a slew of listicles and thinkpieces, either celebrating the show’s legacy, puzzling out its appeal, or even detailing its shortcomings. But once the actual date of the anniversary hit – Sept. 22 – it all came to an end.

Or so we thought.

It wasn’t enough that the Fountains of Bellagio danced to the “Friends” theme song or Nathan Sawaya made it into the Guinness Book of World Records for building a life-sized Central Perk set out of LEGOs. But there was also the Blue Man Group “Friends” tribute, the Phoebe taxi cab escape room, a mini concert by The Rembrandts, and recording your own “Smelly Cat” song, among several more AT&T 5G Friends Fan Experience activities that had fans queued up for hours. Even Salon, who got the VIP treatment, didn’t get to do everything – although really nothing could top meeting Marcel (played by the capuchin monkey Katie).

Basically, anything that could be dreamed up for this 25th anniversary became a reality, Salon learned in interviews during the Las Vegas trip.

“We just did them every crazy idea. Anything that we could execute, we did,” Warner Bros. Chief Marketing Officer Lisa Gregorian told Salon. “We just had things that we would present to the divisions: AT&T, Warner Brothers, and Turner at that time. One, it had to be fan-first, whatever the experience was. Two, we wanted to give back to the community worldwide, wherever we were executing something – whether that was The Trevor Project, local charities that we've been working with, or Best Friends Animal Society.”

A sustained and ever-growing fandom

Planning for the extravaganza began over 18 months ago when Warner Bros. made a case for blowing out the anniversary because of the show’s global popularity.

Gregorian said, “We started with our research and insights department and basically had them put together all of the information on ‘Friends,’ things like it's been viewed over 50 billion times in the United States, which allowed us to then present to different colleagues around the company. We wanted to show that we knew how popular ‘Friends’ was because we're the marketing department and when we are selling ‘Friends’ globally, so we know how it performs, that it was multigenerational.”

“Friends” has always been popular overseas, offering a shiny, sanitized look at life in New York. But its continued popularity around the world and its appeal to new, younger voters has been the result of the streaming age.

“God bless Netflix and streaming and now what's it gonna be on? HBO Max,” said David Crane, who co-created the series with Marta Kauffman. “It is amazing that 10-, 11-, 12-year-old people are discovering it and embracing it and not feeling, ‘Oh, here's this dated thing that my parents used to watch.’”

Of course, the original core fanbase of Gen X-ers and Millennials paved the way for such anniversary excess. They’ve had a proven track record of staying devoted to the show over the decades.

Salon spoke to two of those Millennial media-savvy “Friends” fanatics – Marisa Roffman, owner of TV news site Give Me My Remote, and Gold Derby senior editor Joyce Eng (both of whom are also this reporter’s former work colleagues) – about how they’ve kept “Friends” alive for themselves even before the advent of streaming.  Between the two, they own recorded VHS tapes, VHS “Best Of” sets, several DVD sets, and the complete series on Blu-ray, one even signed.

“Ironically, I used to watch it a lot more on syndication than I do now, when I could hit ‘play’ any time I want on Netflix. Growing up, I would watch the repeats at 7 p.m. and 11 p.m. on The WB every night (Thursdays were my favorite because I would get three episodes), and of course there are the TBS and Nick at Nite reruns,” said Eng.

“My college roommates were also fans, so we’d pop in a DVD every night before we went to bed. Now, I watch it whenever the mood strikes or I need a pick-me-up, and I would end up bingeing like three seasons (usually the middle seasons because those are the best). If I come across it channel-surfing, I will stop and watch. And I watch the Thanksgiving episodes on Thanksgiving and may or may not make a Moist Maker sandwich the next day.”

Eng wrote about “Friends” for her college essay, and both she and Roffman have covered the show extensively for work, including interviews, behind-the-scenes trivia, and making their own variations on the Hardest “Friends” Quiz.  Roffman’s version launched on the 25th anniversary.

“I rewatched the entire series and took a number of pages of notes for potential questions. I was like, what's reasonable to ask that's not like pausing the DVR to write it down? So it was: When did Joey first say, ‘How you doin’?’ What is Ross not allergic to? These kinds of things that are a lot deeper cuts. At this point, only two people, out of all the ones that have taken it, have gotten 100 percent.”

This is just one of many examples of the “Friends” feedback loop at work, with original fans now creating content for the next generation and feeding that appetite. It’s rare, but for certain pop culture properties, the interest stays strong and renews itself periodically – much like the cult following for David Lynch’s “Twin Peaks” that had remained alive even before “The Return” aired 27 years later.

The One With the Never-Ending “Friends” Anniversary

With no signs of the fandom waning, there really is no reason Warner Bros. wouldn’t trot out more anniversary goodness. So if you somehow missed out on celebrating, don’t worry. All illusion of a slow, staggered rollout are gone. Now there are activities being announced almost weekly, some overlapping with others. It's a true "Friends" smorgasbord, and you can even have seconds.

Recently, Warner Bros. announced that eight more “Friends” Thanksgiving episodes will head to theaters for a two-night engagement, as well as a Boston pop-up experience running Nov. 21 - Jan. 5. If you want to do the Las Vegas experience that Salon did, some of those activities, including the LEGO Central Perk and “Smelly Cat” recording booth, will be transplanted to Los Angeles from Dec. 5-23 through AT&T. And, to take advantage of the winter holidays and season of gift giving, props from the show will be auctioned off Dec. 3-17. It's just a matter of time before the ball will drop for a New Year's Eve announcement.

Check out a video tour of the LEGO Central Perk set below:

“We're planning on going until the end of the year,” said Gregorian. “Everything is so specific to the part of the world that we're presenting it to and it's all about delivering a great fan experience for that particular fan base. So I don't think it's going to create any type of burnout.”

Crane is more cautious. “I hope we're kind of at the end of the whole hoopla thing because yeah, the last thing we need is a backlash.”

He needn’t worry. For the true fan, there’s very little risk of backlash or burnout. With 10 seasons’ worth of programming, the possibilities for new activities and fresh merchandise – a stuffed Hugsy the Penguin was offered at the New York pop-up – seem limitless, to say nothing of the numerous catchphrases that can adorn t-shirts and mugs. Plus, there are plenty of holiday-specific episodes that make the show applicable year-round. There are no limits to what fans want except for time and money.

“What has always worried me was that the show itself would be revived; I don't want that,” said Roffman. “My God, the show ended and had an ending. We don't need to see them come back because we can never live up to what we want it to on our head, even if it's incredible acting and incredible writing. It ended in a beautiful way.”

Eng agrees. “I absolutely do not need a revival. The creators are anti-revival too, thank God. Let things end,” she said, but added, “The cast reunion sans Matthew Perry at the James Burrows tribute in 2016 is the type of thing I’m OK with. If they want to do bits on talk shows too, that’s fine as well. The cast hasn’t outright been part of this celebration, and I’m sure Warner Bros. would love to get them back together sooner rather than later.”

That might be in the works already. According to The Hollywood Reporter, a reunion is being mulled over for WarnerMedia’s upcoming streaming platform HBO Max, which will get the original series once it leaves Netflix. Although talks are underway for the six main cast members and creators, sources say it’s preliminary only, and could amount to nothing.

It’s been a logistical challenge to get all six cast members together in an official capacity, although they finally made a rare appearance together on Jennifer Aniston’s fledgling Instagram account recently.

Until an actual reunion happens, at least fans can look forward to many anniversaries to come. And just maybe, the magic will still be going strong for another 25 years.

James Michael Tyler, who played Central Perk barista Gunther on the show, had made it to Las Vegas for the celebration and even appeared on stage with the Blue Man Group. He’s always game to support the show, even if the 50th anniversary might be a more physical challenge.

“They'll probably have to have a hologram of Gunther for that one, right?”