Thank you, "The Sims," for saving me from "Friends"

For my sub-generation of millennials, toxic ideas about sex were taught by "Friends" — and undone by "The Sims" 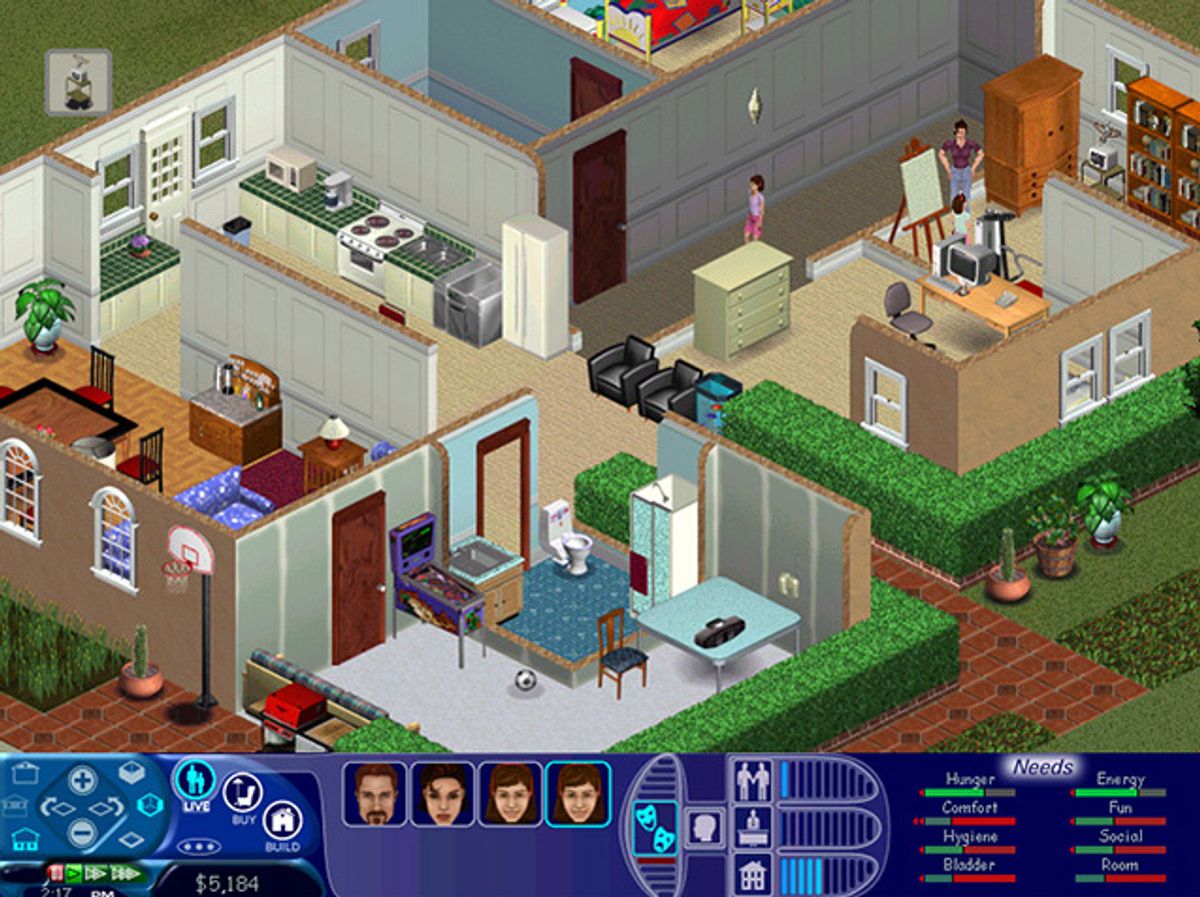 Psychologists say stability is key to a healthy childhood. The chaos of moving or changing schools frequently disrupts kids' routines; staying in one place — the same house, in the same school district — supposedly produces healthier outcomes.

Yet staying in one place for an entire childhood can have deleterious effects of its own. Those of us raised in suburban or rural enclaves likely know the immense social pressure to behave in ways the microcommunity believes are normal, or risk being ostracized.

I had one of these childhoods, living in an island of normalcy, oblivious that our values were not universal. This was suburban Tucson in the 1990s, a lower-middle class enclave of senior would-be retirees working service jobs and anomic teens slaking our alienation with hooliganism and bad hardcore music. Despite southern Arizona's reputation as "the blue part of a red state," my community was not what you would call progressive — a fact that could be visually ascertained by the preponderance of strip malls, 6-lane roads and aggressive evangelical bumper stickers.

I had the distinct sense that there were more cosmopolitan and less socially stifling cities in the country where one might live; but not having lived anywhere else, the only way I could get a sense of this was through television. Seeing adults' lives on the evening sitcoms helped me envision what mine might be like once I left the nest — and through shows like "Friends," I daydreamed of a better life, like the ones that the characters on that show had, in a culturally rich megalopolis like New York.

Part of what made "Friends" so influential on my life, as well as in the lives of many millennials', was its ubiquity. The show was syndicated for many years on local stations, even before its run on NBC formally ended; I watched the show weeknightly on our local WB syndicate, which, unlike static-ridden NBC, came in crystal-clear on our antenna. Hence, a few hours after school ended, "Friends" was on the TV; my sister would turn it on first, and I would join her — loath to admit that I liked something that my little sister liked too, I mocked it performatively in her presence, though secretly I was enthralled, too.

"Friends" was popular in part because it was comforting. As Salon's TV critic Melanie McFarland writes, "'Friends' is a window into an anachronistic existence where people have the time and inclination to hang out and chat at a coffee shop." And though the financial particulars of the characters' lives are absurd — how do they afford that Manhattan loft if they never work? — the show takes place in a realist vein. The other shows I watched as a tween and teen — "The Simpsons," "Futurama," "King of the Hill," "Newsradio" — were absurdist, over-the-top, clearly not depictions of what my life might look like in the future. "Friends," though, felt like a reasonable projection of what a teenager living in a boring American suburb might expect from his or her early twenties upon migrating to a big city. A group of close friends, who pop into each other's apartments regularly, and who struggle with work and love lives but are always there for each other — what else could one want out of young adulthood? Like many suburbanites, I dreamed of a more cosmopolitan existence — and the only real model I had for that was the show.

But there were other lessons "Friends" was teaching me, too — other ideas that crept into my psyche, unbidden. For one, the show's depiction of men, and of masculinity, particularly influential on me as a young man who had never really wanted to be one.  Like most red state suburbs, the most prominent masculine archetype in suburban Tucson was The Jock: brutish, homophobic, sports-obsessed, clad in shorts and flip-flops like a perpetual teenager. The popular boys at school, and my friends' fathers, all looked and acted like this. It did not appeal to me, but then, I didn't really see an alternative. The men on "Friends" were slightly different; at the least, they reveled in being witty and riffing on each other, something that appealed to me more than sitting around making fart jokes and talking about the NFL.

I was not exactly a paragon of masculinity as a tween, and I had no conception of gender as a construct until college. Hence, the model of male friendship on "Friends" I interpreted, wrongly, as "normal" for adult men in big cities: deeply insecure, afraid of being interpreted as homosexual, living in fear of emasculation. Samantha Riedel, writing a retrospective of the show in Them, explained this eloquently:

Friends is more than just a goofy series of contrivances based on hyperbolically strict standards of heteronormativity; it's a show about being regularly harassed and humiliated for performing a queer sexual or gender identity, mainly by one's closest confidants. And though it's tempting to give the show some slack because of its cultural context, that doesn't actually excuse any of its toxicity.

Riedel notes how one of the few queer characters, Ross' ex-wife Carol, who comes out as a lesbian and leaves Ross, is a foil to make Ross feel emasculated — as if his wife were gay because he weren't enough of a man. Adults may be able to see Ross's insecurities as part of wry self-deprecating joke, but as a child I did not interpret it that way.

There is a reason that so many advocacy groups fight against advertising targeted towards children: children are indeed more impressionable, and have trouble sorting out what is normal behavior and what isn't. Children learn from the "media" around them; in ancient times, that meant stories handed down orally. Now, children are more likely to learn our mores from the "stories" issued from the byzantine bureaucracies of multinational conglomerates like General Electric, which, at the time, owned NBC and thus produced "Friends" during its 10-year run.

When I think of the childhood lessons I absorbed about gender and sexuality — lessons that would be jarringly subverted and undone in my twenties, as an undergrad at UC Santa Cruz and Oberlin — the other media that comes to mind, in a positive way, is "The Sims." Popular in the same era as "Friends," "The Sims" was a video game that essentially allowed its users to play house: one controlled a virtual person or family, and managed their daily needs, careers, finances, and — crucially — love lives.

Released in February 2000, a mere year before the Bush era's start, "The Sims" featured a romance mechanic that would let any of your simulated people ("sims," in game speak) fall in love with any other sim, provided that their personalities aligned. The game paid no heed to the characters' gender, nor skin tone, nor general physical appearance. In the sim-world, everyone was pansexual and lived in a genderless multiracial utopia. The only real difference between same-sex and opposite-sex relationships was that if sims of opposite genders fell in love, a baby would appear eventually. (Evidently, birth control didn't exist in the simsverse.)

If playing house in a pansexual multiracial utopia felt weird to me at first, it was only because I had never been exposed to what, in retrospect, was kind of a radical idea. But like most players of my age — I was 13 when the game was released — it ceased seeming "weird" only because I spent so much time with the game that such ideas became normalized to me.

Similar to "Friends," "The Sims" was played by nearly everyone I knew. It was the best-selling game of its time; those who didn't have their own copy would play at friends' homes, on computers of the era. (I cannot think of playing "The Sims" without visualizing it on one of those heavy cathode-ray computer monitors.)  Now, looking back at the game, I am frankly shocked that it didn't cause more of a moral panic than it did. The culture wars were in full swing by the Bush years, and less controversial books with less vivid gay stuff (like "Harry Potter") were giving family values conservatives minor aneurysms. I can only surmise that the reason that "The Sims" passed under the radar is because social media did not yet exist, and it was more difficult to perpetuate mass hysteria.

I have often wondered if my generation's open attitude towards same-sex relationships could be partially owed to how many of us were exposed to them through "The Sims." Whereas "Friends" depicted a very specific, heteronormative white upper-middle class urban set of cultural mores, "The Sims" was the epitome of a sandbox, a place where you could endlessly experiment with love and gender relations. I know multiple people my age who discovered their queerness by and through "The Sims." That makes total sense: for a queer tween living in a homophobic community or family, that kind of virtual play can be a form of catharsis and escape.

All media, whether video game or TV show, teaches something about culture. No matter how detached you are, no one can watch a hundred hours of a show like "Friends" and not feel an effect on one's values and beliefs.  "Friends" taught boys like me that adult, straight men should feel threatened by any hint of homoeroticism; that being wrong or having one's ego smashed is a profoundly emasculating experience; and that being even briefly perceived as gay is something one should fear. When I look back at my pre-teen and teenage years, I feel a sense of relief that I had "The Sims" as an antidote to "Friends'" troubling and oft-toxic depictions of gender and sex. This month marks the 25th anniversary of the "Friends'" premiere; February 2020 will mark the 20th anniversary of "The Sims'" release. I will be celebrating the latter.