"We followed the president's orders": Sondland gives up Trump — and everyone else 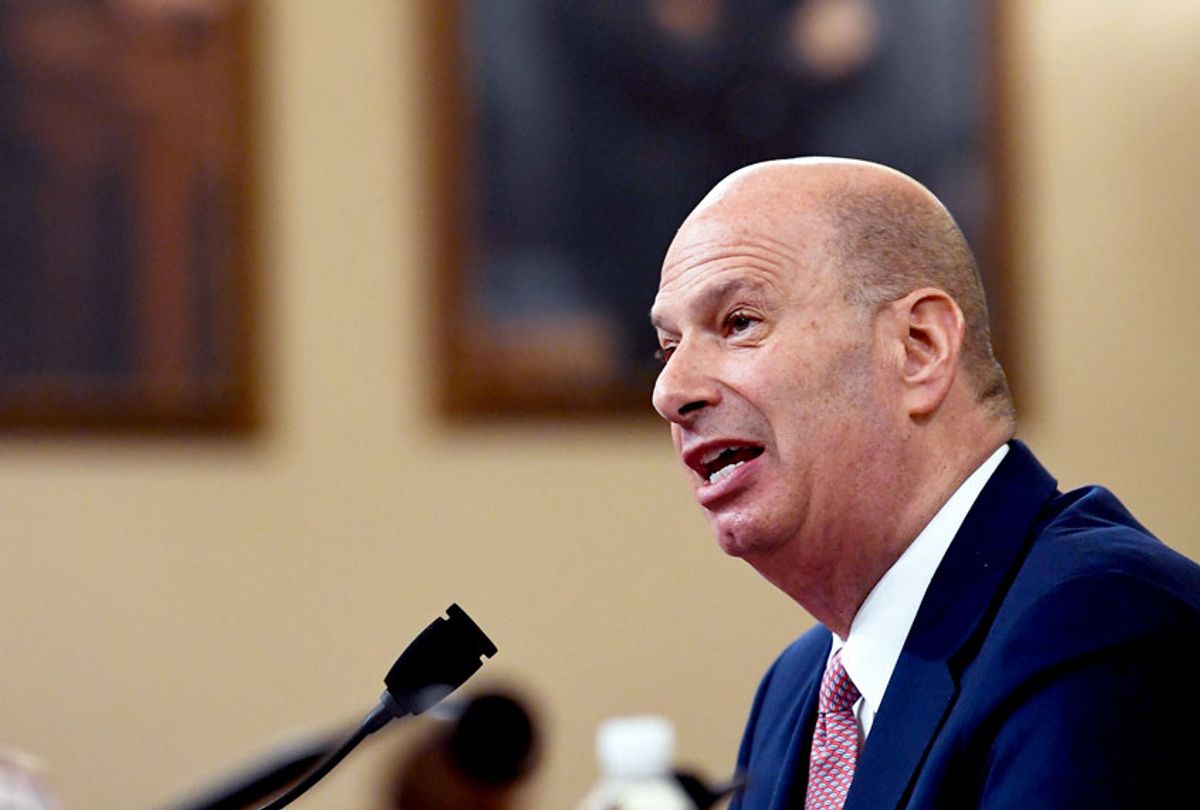 U.S. Ambassador to the European Union Gordon Sondland gives his opening statement as he testifies before the House Intelligence Committee on Capitol Hill in Washington, Wednesday, Nov. 20, 2019, during a public impeachment hearing of President Donald Trump's efforts to tie U.S. aid for Ukraine to investigations of his political opponents. (AP Photo/Susan Walsh)
--

On Wednesday morning, EU ambassador Gordon Sondland decided to save himself. In dramatic testimony before the House Intelligence Committee, Sondland — a Donald Trump appointee who gave the president $1 million for his inaugural party — gave up the president and pretty much everyone else.

Like former ambassador Kurt Volker on Tuesday, Sondland painted a picture of himself as a hapless naïf, unaware that the proposed "investigations" Trump and his personal lawyer, Rudy Giuliani, kept demanding from Ukrainian leaders were actually an effort to fabricate conspiracy theories about former Vice President Joe Biden and other Democratic officials.

It's not a likely story. Giuliani was, at the time, talking up this conspiracy theory to anyone who would listen, including New York Times reporter Ken Vogel. But it really doesn't matter. Because, in his effort to save himself, Sondland had to rat out huge chunks of the senior staff at the White House, including President Trump himself.

"We followed the president’s orders," Sondland said, in a statement full of these blunt statements that fit beautifully in headlines.

"Everyone was in the loop," Sondland said of the scheme to extort Ukraine President Volodymyr Zelensky into making public statements to back Trump's conspiracy theories.

"A lot of senior officials," he noted, naming names: Secretary of State Mike Pompeo, Energy Secretary Rick Perry, acting White House chief of staff Mick Mulvaney and their respective staffs — and he brought emails to back these accusations up. Pompeo, in particular, is implicated in discussions about the specific language they wished Zelensky to use in order to stoke lies about Biden.

Sondland also threw Vice President Mike Pence under the bus, saying he spoke with the veep before a Sept. 1 meeting "with the Ukrainians" and explicitly told Pence "that I had concerns that the delay in aid had become tied to the issue of investigations."

Lest there be any doubt, Sondland made quite clear that he knew for a fact that Trump had explicitly demanded a quid pro quo of Zelensky's public announcement in exchange for a White House meeting.

He also made clear that he believed military aid was conditioned on this public announcement, so much so that he pulled aside Zelensky's aide and told him "that I believed that the resumption of U.S. aid would likely not occur until Ukraine took some kind of action on the public statement that we had been discussing for many weeks."

House Democratic counsel Daniel Goldman focused heavily on the issue of public announcements, repeatedly asking Sondland about how important it was for Zelensky to make a public statement meant to bolster Trump's conspiracy theories.

As he "understood it," Sondland answered, Zelensky only "had to announce the investigations" to get his White House meeting and military aid, and "didn't actually have to do them."

This was critical, as it underlines how much the Ukraine extortion scheme was not about "corruption," as Trump has insisted, but about fabricating evidence to be used against Biden, who Trump sees as his likely opponent in the 2020 election. Trump simply wanted Zelensky to go on TV and imply that Biden had done something that needed investigation, likely in a U.S. TV interview that Trump and Giuliani clearly intended to use to stoke lies about Biden for the rest of the election cycle.

Throughout the testimony, Sondland's affect was giddily nervous, a contrast to the more serious, composed faces of the professional diplomats who have testified previously. Sondland's nervous smile only reinforced how much he is a man in over his head. He started this journey as just a typical wealthy Republican doofus, buying himself an ambassadorship and loving his big, dumb president. He is no elite criminal, but a guy who got caught up in Trump and Giuliani's conspiracy — and who has the money to pay a lawyer sharp enough to know when the gig is up.

As for the Republicans, it's clear that they had no idea what to do with this Trump enthusiast-turned-songbird sitting before them. House Intelligence ranking member Devin Nunes' expression, before the Republicans started their questioning of Sondland, said it all:

Nunes resorted to his usual strategy in these hearings, which is to ask a bunch of non-questions that are just an excuse to name check a bunch of right wing conspiracy theories, like a rapper rattling off fancy brand names. Republican counsel Steve Castor tried valiantly to poke holes in Sondland's account, but to little avail, since there's overwhelming public evidence to support the story Sondland tells of an extortion campaign masterminded by Trump himself. Castor's effort will give the Fox News propaganda corps stuff to chew over, but had little value outside of that.

Above all, what Sondland's testimony does is drive home how much this extortion scheme was Trump's baby. Sondland argued that he and the career diplomats he was tasked with working with supported Ukraine and wanted Trump to do more to support that nation in its war against Russian invasion. But in Sondland's telling, Trump and Giuliani were only interested in extracting public statements from Zelensky that Trump could use to promote his conspiracy theories. This doesn't just go all the way to the top. The top is where the entire conspiracy began.

Just as important, Sondland painted a picture of a White House where Trump has surrounded himself with people who are equally committed to abusing power, lying about their political appointments and manipulating foreign policy in order to cheat in the 2020 elections. His testimony implicates multiple Cabinet secretaries, Trump's acting chief of staff, and even the vice president.

Whatever else Republicans do next, there can no longer be even a shred of doubt: Trump is a criminal, and Republicans who protect him know that. Any choice to continue supporting Trump — as well as those around him who were in on this scheme — is a straightforward decision to support a president who breaks the law in order to cheat in elections.