"I'm deeply convinced that these are violations of international law." 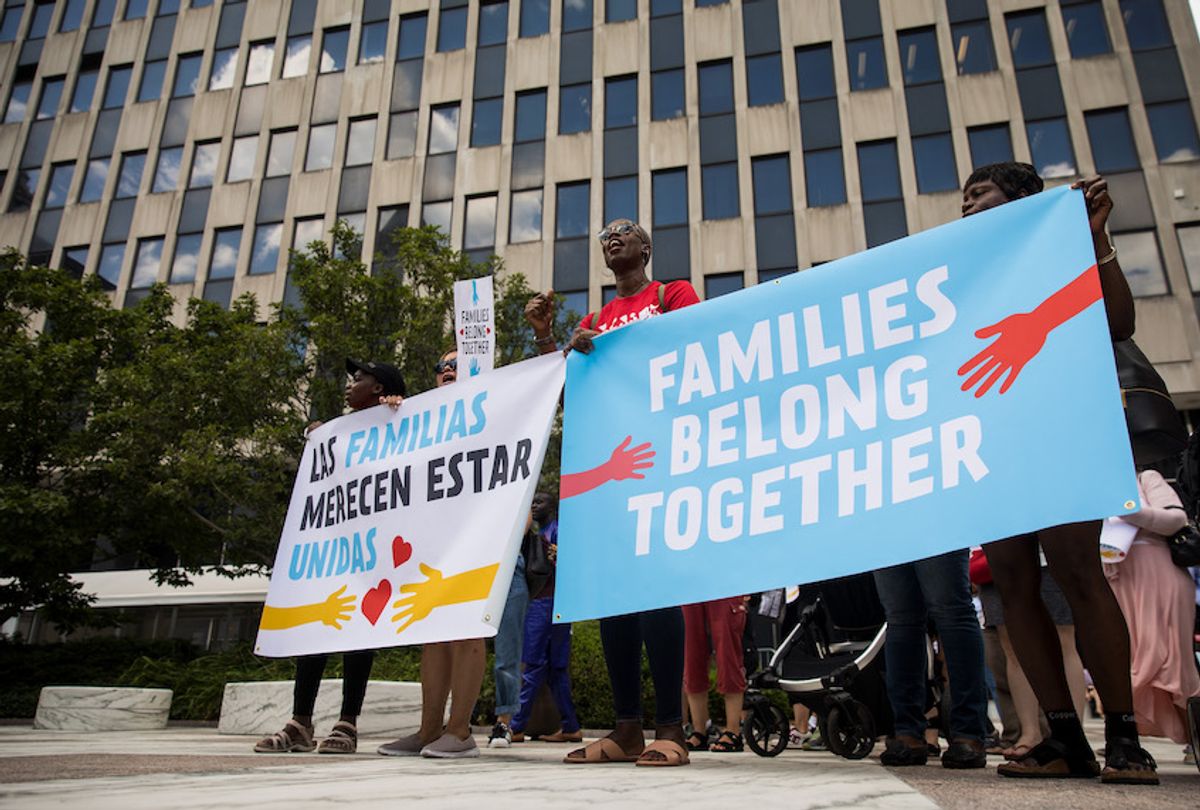 Activists, including childcare providers, parents and their children, protest against the Trump administrations recent family detention and separation policies for migrants along the southern border, near the New York offices of U.S. Immigration and Customs Enforcement (ICE), July 18, 2018 in New York City. (Drew Angerer/Getty Images)
--

The Trump administration violated international law when it separated migrant children from their families, a United Nations expert said Monday.

Nowak made the remarks to press at the formal launch of the report, the U.N. Global Study on Children Deprived of Liberty, he said has the power to effect positive change.

Referencing the Convention on the Rights of the Child, Nowak said that "the detention of children shall only be a measure of last resort and only if absolutely necessary for the shortest appropriate period of time. That means, in principle, children should not be deprived of liberty."

"Alternatives to detention are usually available," said Nowak, "it's simply a question of politics."

A lack of political will to make that policy change was clear, Nowak suggested, when the Trump administration instituted its so-called zero tolerance policy in which officials separated children from their parents at Southern border.

"Of course, separating children — as was done by the Trump administration — from their parents, even small children, at the Mexican-U.S. border is absolutely prohibited by the Convention on the Rights of the Child," Nowak continued. "I would call it inhuman treatment for both the parents and the children. And there are still quite a number of children that are separated from their parents — and neither the children know where their parents are and the parents [don't] know where the children are — so that is definitely something that definitely should not happen again."

"We still have more than 100,000 children in migration-related detention" in the U.S., Nowak said, "so that's far more than all the other countries where we have reliable figures." Nowak added that the U.S. "did not respond to our questionnaire" requesting data for the report.

Nowak added the U.S. is detaining high numbers of children in the criminal justice sector as well.

"In general the incarceration rate in the United States is very high," said Nowak.

The United States detains on average about 60 out of 100,000 children — a figure Nowak said was "the highest we could find followed by others like Bolivia or Botswana or Sri Lanka."

"In general we could say that the American hemisphere has the highest rate of children deprived of liberty in the administration of justice," the U.N. expert said. The lowest rate was found in sub-Saharan Africa.

Asked whether the United States — the only U.N. member state not to have ratified the Convention on the Rights of the Child — would face direct consequences of the rights violations, Nowak said direct action from the United Nations was unlikely because the United States is a permanent member of the Security Council

"That's one of the weaknesses of the United Nations," said Nowak.

The United States is party to the Convention on Civil and Political Rights and the Convention on Torture, Nowak noted, and said that the way the Trump administration was "separating infants from their families only in order to deter irregular migration from Central America to the United States of America, for me, constitutes inhuman and degrading treatment. And that is absolutely prohibited by the two treaties."

"I'm deeply convinced that these are violations of international law," Nowak adding, same that the same could be said of the high number of children incarcerated through the U.S. criminal justice system.

Despite likely inaction by the U.N. to make the U.S. face consequences, Nowak said it doesn't mean the continued deprivation of children's liberty would continue unabated.

Nowak expressed hope his new study, like the 1996 report on child soldiers, would have an impact "not because of sanctions but because of its power of facts."