Post-bankruptcy, construction had finally returned to Detroit — thanks to generous tax subsidies 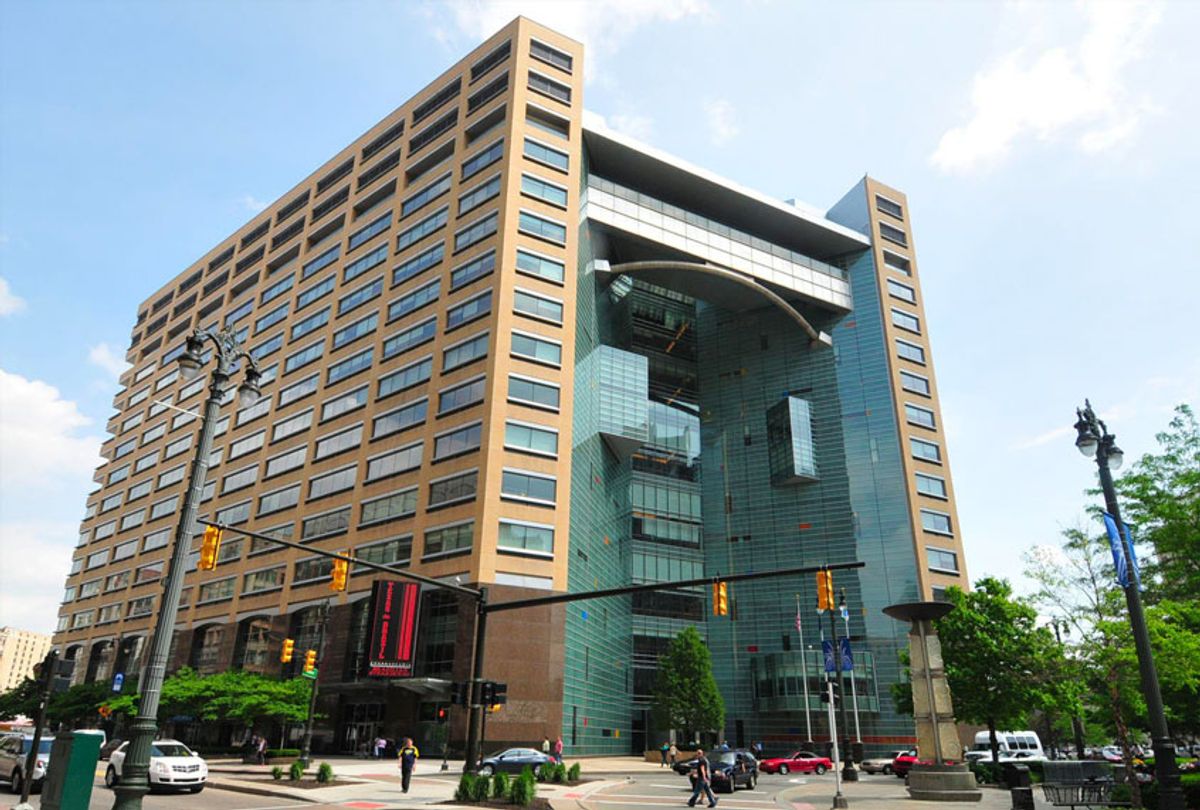 From "Broke: Hardship and Resilience in a City of Broken Promises" by Jodie Adams Kirshner. Copyright © 2019 by the author and reprinted by permission of St. Martin’s Publishing Group

As autumn turned into winter and the snow began, Miles stood on top of a ladder, painting the ceiling of a northeast Detroit barbershop. His height made the ladder almost unnecessary, and he looked very thin, almost wiry.

Miles felt grateful to have the painting job. He knew a dwindling number of people who still sometimes called him with work. He hoped that by working that day, a Saturday, and finishing early, he might convince the owner of the barbershop to offer him more to do. Miles’s grip on his house remained weak and uncertain, and he needed to make as much money as he could. His devil still hung around.

Two billionaires seemed to be developing most of downtown. Desperate city officials appeared to consider the fate of the city in their hands. Though unlike Fitzgerald and other neighborhoods, downtown had a functioning private real estate market. The officials nevertheless offered the developers seemingly limitless subsidies, hoping the developers would create jobs and lure new residents to revitalize the tax base. The subsidies so far had not led to more work for Miles.

Traditionally the city relied on tax increment financing to spur development. The approach, which underlay the construction of the new downtown hockey arena, where the Detroit Pistons had just agreed to play, enabled the city to sell bonds based on the amount that property tax revenues within a defined area might increase because of the development project. Like mortgage securitization, in which financial institutions sliced up the future payments on mortgages and sold the slices to downstream investors, the city projected the property tax revenues that might flow from a new project, sliced those future revenues into pieces, and sold the pieces to outside investors. The investors’ money paid a private developer to construct the new project.

If the project did not produce the full increase in property tax revenues that the city sold rights to, the city took the loss. If the project increased property tax revenues in the expected amount, the money paid the investors and did not directly boost city tax rolls. Even successful projects therefore provided the city more buzz than actual bucks, unless the projects spurred subsequent, unsubsidized development. This rarely happened, and limited evidence indicated that such financing helped the cities that used it.

But Daniel Gilbert, the owner of the mortgage lender Quicken Loans, demanded more in return for revitalizing vacant sites. As Miles scrounged small home repairs Gilbert began lobbying for state legislation that, along with providing developers with projected increases in property taxes, also diverted increases in income and sales taxes to the developers.

In a city in need of jobs and investment, and a state loath to contribute to the city, government officials would eventually agree to the subsidies Gilbert demanded. In his own small corner of the city, Miles understood that “God’s not just gonna hand you everything”; he had to work for it. Long-term city residents like him, as well as small-bore entrepreneurs, however, lacked access to public spoils that made success easier to find.

Miles never seemed prouder than when he talked about the heyday of his work before Detroit’s property market crashed. People came from everywhere — New York, California, Washington, D.C. — to buy houses. Once he built rapport with them and showed good results, the money flowed. Back then he “believed in his career.”

As a teenager he chose construction as a way to fend for himself. He never met his father, and his mother stopped working when his brother’s father died. Miles introduced himself to men he saw working outside and earned money doing small jobs for them. When he finished high school he took a six-month evening class in building trades. Computers could not do the work, and he thought it would provide him a sustainable living. Since the financial crisis, as he suffered year after lean year, he doubted his choice.

Lately he heard that new construction projects were finally returning to Detroit. To survive he desperately tried to meet the people buying and selling properties. He spent the morning networking by handing out business cards at his local laundromat.

Neither Dan Gilbert nor his deputies did their laundry there. In 2011 Gilbert relocated his mortgage lending company Quicken Loans from the suburbs to downtown Detroit with $50 million in incentives from the state. In the following years Gilbert’s holding company, Rock Ventures, bought more than 85 Detroit buildings. As Gilbert shifted 15,000 employees into the city, many of them found housing in the residential towers he bought and renovated downtown. Businesses catering to his employees sprang up in other buildings he owned. The increased density and new restaurants and stores contributed vibrancy to downtown, and he helped brand the city a place of rebirth and opportunity. He donated widely to philanthropic causes, co-chaired the local blight task force, and urged his employees to perform volunteer work for the city. Quicken Loans, however, faced federal scrutiny for its potential role in the subprime mortgage crisis. Though company spokespeople maintained the firm neither wrote nor originated subprime mortgages, a lawsuit filed by the Justice Department suggested that over five years the company falsely represented that it underwrote mortgages with due diligence in order to qualify for Federal Housing Administration insurance. The federal insurance protected lenders against home- owners’ mortgage defaults. When homeowners could not pay, taxpayers, not Quicken, absorbed the losses. Gilbert now stood to reap enormous personal rewards as the value of his downtown real estate holdings rose.

He planned to build out more than 3 million further square feet of downtown real estate, including a new skyscraper and 900 apartments, which he predicted would generate 15,000 construction jobs and 9,000 permanent jobs for Detroit. Within a few years the new subsidies for redeveloping abandoned properties that his lobbying secured would pay all the state sales and income taxes generated during qualifying projects’, including his own, construction and half the state income and withholding taxes owed by people who later lived and worked at the properties. The developers would also claim any increases in local property tax revenues their projects generated.

Critics charged that the new subsidies would prevent new developments from contributing to the city’s revitalization. All the revenues from the projects, even indirect revenues, would flow to developers like Gilbert. Michigan already offered more tax breaks and incentives to businesses and developers than other states, but the state had not experienced corresponding job growth. Miles sensed that money traveled from downtown to the suburbs and beyond, keeping neighborhoods like his “a blender full of junk.”

Miles returned home from hustling for work at the laundromat to his empty living room, where the ceiling still stood open to the elements. Construction felt like a dying field, and he wished he could retrain to become a physical therapist. People always got injured. He could not, however, keep his house and also spare time without income. Even his plan to watch online courses in advanced construction techniques on his phone had recently ended in him defaulting on the loans the institution offered him to cover the small tuition.

In spite of his bleak fortunes, he projected dignity and elegance. Standing to his full height, he recounted how activists in Detroit were fighting to make companies that profited from public subsidies contribute more to the city and its residents in return. The activists noted a $175 million tax break the city extended to a gas company expanding a refinery. The expansion created only 15 jobs for local residents. The Ilitch family developing the new hockey arena, who reported a net worth of $3.2 billion, promised to hire Detroit residents into more than half the 5,500 positions the family expected the project to create. Though the Ilitches received $440 million in state and local subsidies, they did not meet the hiring target. They maintained the city did not have enough skilled workers. Miles wondered what that meant for people like him and his friend Charles, who knew construction and could not make a living.

In Lansing state officials tried unsuccessfully to block progress on the ballot initiative with a bill that would ban such requirements on developers and also prevent cities from raising the minimum wage; in Detroit city officials worried the activists’ demands would impede the city’s ability to compete for development projects. Local officials devised a rival proposal that would compete with the activists’ in the referendum. The government’s proposal increased the threshold investment and public subsidy that triggered a benefits requirement and made potential benefits agreements practically unenforceable. Developers of qualifying projects would only have to meet with a neighborhood advisory council, made up of members mostly handpicked by city officials, that would interact with developers in a purely advisory way. The council would have the opportunity to present concerns before the developers negotiated actual agreements with the city planning director. Any concessions developers offered to the council would have no binding legal force.

In Detroit both proposals — the one that activists put forward and the more conservative response — reached the ballot in November 2016. The head of the city’s economic development team mailed a protest letter to the City Council. The letter suggested that the city should be lowering barriers to development, not raising them. Because of its high taxes, reputation, and crime rate, the city already did not compete well. On Election Day the more conservative proposal prevailed.

Neither proposal addressed a more primary barrier Miles now faced. When large companies hired local workers onto construction projects, they requested copies of contractors’ occupational licenses and documentation of occupational insurance. Miles did not have either one. The license would have cost more than $300 and required a 60-hour course, and the insurance would have necessitated further payments. Previously in his construction career none of the people he worked for asked for proof of them. He knew he did good work, and people could see that he did. Even the lowest-level construction tasks for the companies now coming to Detroit required valid driver’s licenses and transportation. Miles currently had both, but he could lose them at any time. If he ever missed a payment on his auto insurance, he would jeopardize his license and his truck. Without further work he risked his right to drive and his house.