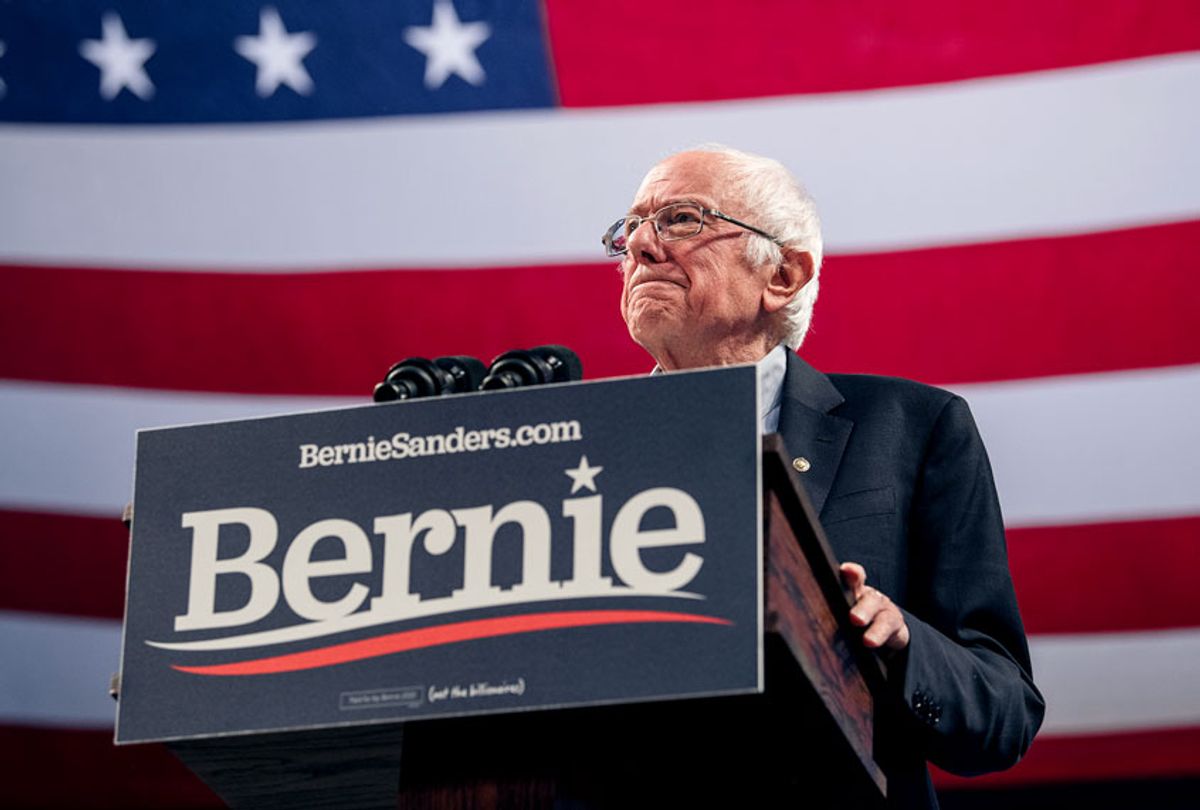 Reporter Lisa Friedman first compared Sanders’ plan to Trump’s border wall (“with the fossil fuel industry footing much of the bill, much as Mexico was to pay for the border wall”) and then panned it in no uncertain terms: “Climate scientists and energy economists say the plan is technically impractical, politically unfeasible and possibly ineffective.”

Who are the ‘experts’? 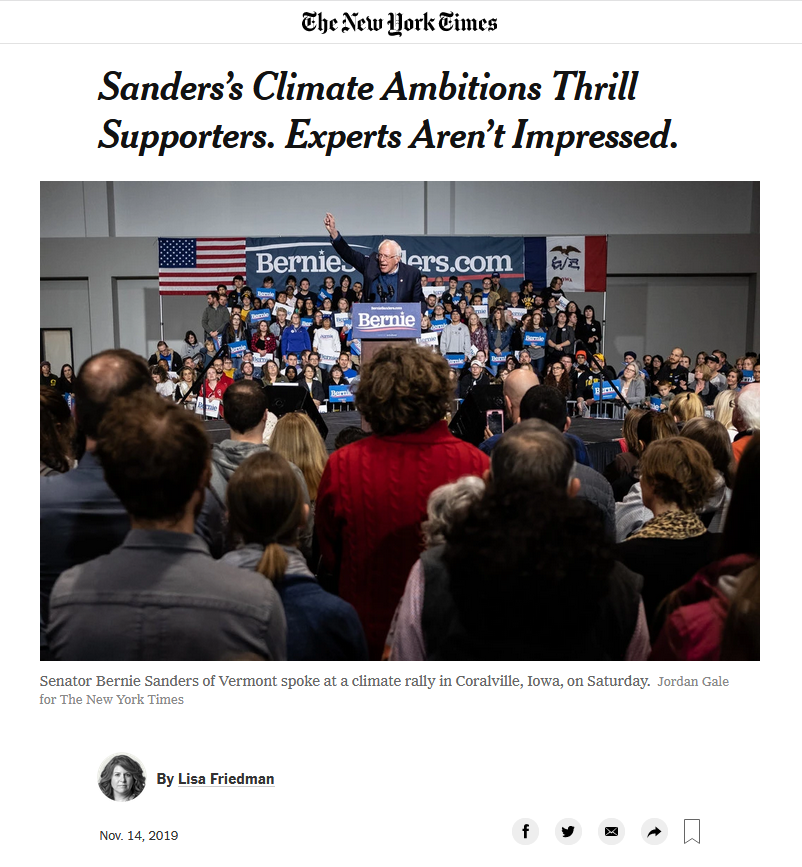 The New York Times (11/14/19) describes Bernie Sanders as “the climate candidate with the most expensive plan.”

Who are the “experts” who are troubled by Sanders’ plan? The piece quotes 11 sources, two of whom are “thrilled supporters” of the sort referenced in the headline, and another a Sanders spokesperson. A fourth is Joel Payne, who suggests Sanders’ program doesn’t “exactly check out,” but although Payne is described as a “Democratic strategist,” he’s not exactly an “expert.”

Of the remaining seven sources, two are offered as examples of how “not everyone sees doom” in the Sanders climate platform: Daniel Kammen, identified as “an energy expert at the University of California, Berkeley,” who called it “audacious but doable,” and Noah Kaufman, a “researcher at Columbia University” (more specifically a climate economist), who said Sanders is “proposing policies that match” the scale of the crisis.

That leaves five critical “experts,” some of whom are not particularly critical. Paul Hawken, author of a work that “analyzes solutions to global warming,” said Sanders’ “sense of urgency in here is correct,” but it could be “more effective” — specifically, by embracing nuclear power. Jesse Jenkins, an “energy systems engineer” at Princeton University, credited Sanders with “trying to set a marker in terms of the pace and scale of spending that he’s proposing,” but doesn’t think it “represents a very nuanced understanding.” Michael Oppenheimer, “a professor of geoscience and international affairs at Princeton University,” questioned Sanders’ backing off from support of a carbon tax, but defended the candidate’s approach as appropriate for “the political arena.”

Finally, there are two people cited in the piece who are entirely critical of Sanders’ blueprint. David Victor is quoted as saying it “can’t work in the real world,” though his identification as a  “professor of international relations at the University of California San Diego and a climate adviser to Pete Buttigieg” might lead a reader to question his objectivity. And Severin Borenstein, “a professor at the Haas School of Business of the University of California, Berkeley,” said, “I just don’t see that getting off the ground.”

So of the seven “experts” quoted by Friedman, two are supportive of Sanders’ proposals to fight climate disruption, two are critical and three somewhere in the middle — a weak validation of her sweeping thesis that “climate scientists and energy economists” as a whole call the Sanders plan “impractical,” “unfeasible” and “possibly ineffective.”

Worse, the bulk of the “experts” quoted by Friedman have unacknowledged conflicts of interest. Borenstein, who can’t see Sanders’ plan “getting off the ground,” is faculty director at the Energy Institute at Haas, which takes funding from energy companies like Pacific Gas & Electric, Southern California Edison and San Diego Gas & Electric. Jenkins, who said Sanders wasn’t “very nuanced,” works at the Andlinger Center for Energy and the Environment, whose “E-Filliates” include ExxonMobil, NRG and Siemens. Hawken, who complained Sanders was too anti-nuclear, leads the Highwater Investment Group, whose top holdings have included Ford Motors and EnerNOC, now part of the energy conglomerate Enel, which produces nuclear power.

The Times did mention Victor’s connection to Buttigieg, but didn’t note that he runs UCSD’s Laboratory on International Law and Regulation, funded by BP and the electricity industry’s Electric Power Research Institute. (His earlier project at Sanford was bankrolled by more than $9 million from BP.) The non-“expert” Payne, in addition to being a “Democratic strategist,” is a PR consultant who has worked for General Motors, South Jersey Gas and the American Chemistry Council.

Bernie Sanders’ climate plan is the only one awarded an A+ rating by Greenpeace.

Funding doesn’t necessarily dictate the views of academics, of course; Kaufman works at Columbia’s Center on Global Energy Policy, which is backed by BP, Shell, ConocoPhillips and ExxonMobil, but still managed to be supportive of Sanders’ program. But corporations do give money to think tanks in the hope of influencing scholarship in their favor, so the Times’ general failure to note such connections when quoting critics of Sanders does a disservice to readers.

Even with a roster of “experts” skewed towards industry-funded research, the actual quotes from Friedman’s sources, as opposed to her paraphrases of what “climate scientists and energy economists say,” present a range of disagreements about the exact methods by which the climate crisis should be addressed, but a general consensus that the crisis must be addressed urgently. And Sanders is one of a few candidates treating the climate crisis as an urgent matter — which you would think should inform the framing of an article about expert opinion of his plan.

A truly informative and fair piece here would compare Sanders’ plan to those of the other presidential candidates (including Trump). Some prominent environmental organizations do this, and rank Sanders’ plan at the top of the primary crowd. (Greenpeace awards him its only A+ score, and 350.org gives him 3/3 thumbs up, along with Cory Booker, Julián Castro, Tom Steyer, Elizabeth Warren and Marianne Williamson.)

But instead, the only comparison the Times gives readers is the misleading and unhelpful parallel it draws between Sanders’ insistence that the government-subsidized fossil fuel industry help pay for his climate plan through “litigation, fees and taxes,” and Trump’s demand that the government of Mexico foot the bill for his wall. Note that the fossil fuel industry, which has spent massive amounts of money to deny climate science and block restrictions on carbon, is made up of corporations subject to U.S. law (at least in their U.S. subsidiaries), unlike the sovereign country of Mexico.

Sanders’ plan to prevent global climate catastrophe and Trump’s anti-refugee wall are not obviously alike in any substantive or significant way; it’s as if the paper can’t resist slipping in gratuitous digs at Sanders any chance it gets, even as the world burns.

Meanwhile, in the presidential debates, journalist moderators have devoted fewer than 10% of their questions to the climate crisis (FAIR.org, 10/17/19). Until media start to treat the climate crisis with the urgency the scientific community continually tells us it requires, they will continue to be a major part of the problem.