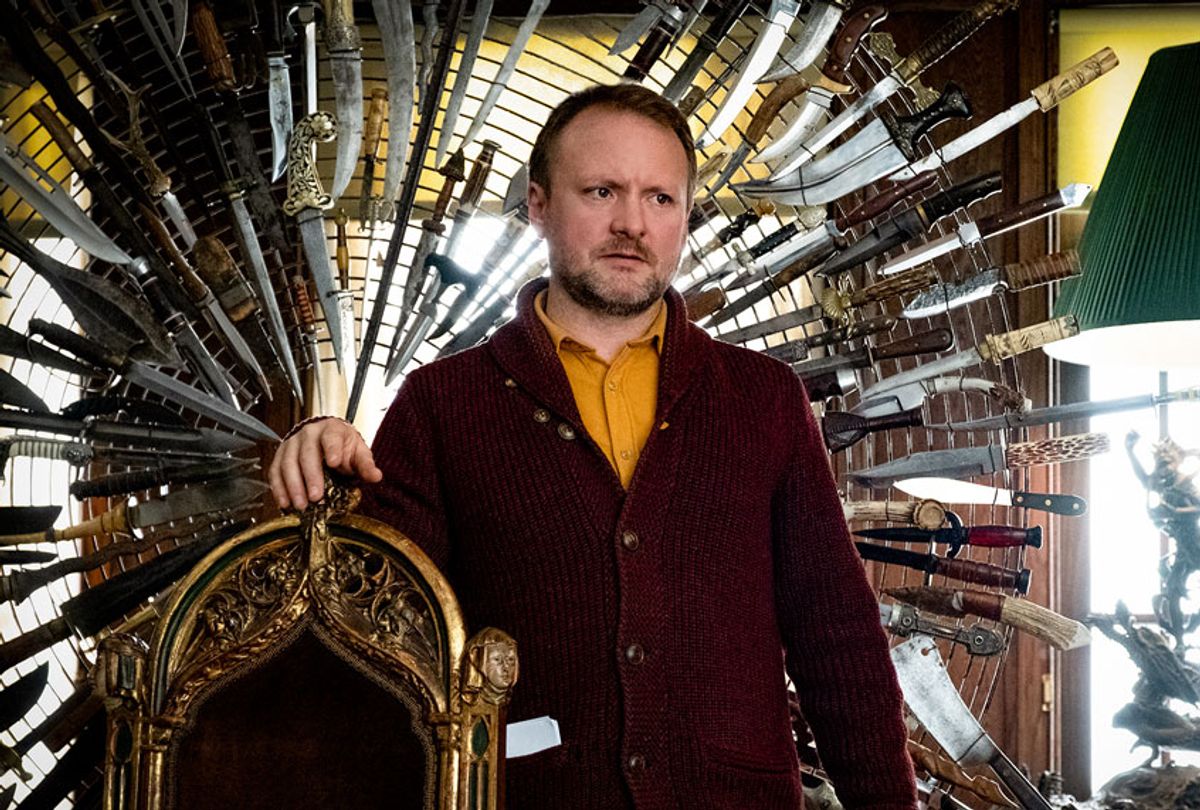 Writer/Director Rian Johnson’s crowd-pleaser, “Knives Out,” is an old-school murder mystery set mainly in a country estate. Its plot is full of games — both Go and Clue are mentioned — and the puzzle of a crime is described as “a donut hole within a donut hole,” by Benoit Blanc (Daniel Craig), the gentleman sleuth anonymously hired to consult on Lieutenant Elliott’s (LaKeith Stanfield) investigation of wealthy mystery novelist Harlan Thrombey’s (Christopher Plummer) suicide — which may, in fact, be murder.

“Knives Out” is a twisty, entertaining film full of red herrings, evil doings, and humor. The comedy-mystery follows Marta (Ana de Armas), who was Harlan’s caregiver. Blanc enlists her help in sorting through characters, clues, and evidence. In the process, she gets up to her neck in lies, deceit, and danger. Marta also has a peculiar response when she lies.

Johnson sat down with Salon to discuss his film, Agatha Christie, and why we love a good mystery.

Are you a game player, a puzzler, competitive?
I am. I do the New York Times crossword every morning. I’ve got a word game that I need to take off my phone… [He searches for it] Did I actually take it off my phone? It’s called Wordscapes. Here it is. This will drive you nuts. [Shows game on phone] I have a four-letter word I can’t find [the letters are C H I S T T]. Is it “sh*t?” [enters S-H-I-T] No, it’s not.

I’ll show you the word game I play on my phone [Wordbrain] after the interview. Otherwise, we’ll never talk about your film! So, what is the appeal of a whodunnit, old school or otherwise? My friend Chris says, “I don’t care whodunnit!” Why do we like murder mysteries?
There has been a bunch of different theories about why this genre stuck around and why it works. There’s the one that does make sense — about it being a comforting genre, the moral clarity of it. There’s a crime in the beginning. The world is thrown into moral chaos. A detective comes in and through moral reasoning and order, he is able to sort out all the pieces, find the bad guy, and put everything right at the end. It’s a stark contrast to noir, and Chandler and Hammett, which is all about moral murkiness. This is about clarity. Consider that the golden age of the genre — it all sprung up in the 1930s — and you can see where the world was at then, and how that maybe felt good, that the notion of reason can restore moral order. But we love solving a puzzle, and it’s a character-based genre. It gives you a rogue’s gallery of suspects, and that gives you the opportunity to have a lot of fun. That’s what Christie excelled at: character. I kind of agree with your friend. The least interesting part of a whodunnit is whodunnit. The best whodunnits have an engine in them that is something beyond collecting clues trying to figure out the puzzle. The best whodunnits — and the best of Christie’s books always have something else — there is more of a thriller-type aspect driving them.

“Knives Out” isn’t quite an “old dark house” mystery, or a “cozy” mystery, nor is it a hard-boiled story. It’s an homage to Agatha Christie without ripping her off. You also throw in valid references to “Murder, She Wrote,” and “Clue” and other touchstones of the genre. Can you talk about that?
I’ve been reading Christie since I was a kid. I still read her today. “And Then There Were None,” is objectively her best book, and I have a soft spot for “The Murder of Roger Ackroyd” — the audaciousness of it. I’m a big fan of “Curtin.”

A lot of people don’t like “Curtain”!
I know! A lot of people hate it. I read it as a kid and I find that book creepy and odd, and strange and kind of beautiful. It’s weird to say — when, next to the Bible, she’s the best-selling author of all time — about someone that successful, that they are underrated as writer, but people tend to underrate Christie. Her later stuff in the 1960s, when she started getting dark, “Halloween Party,” or her gothic romance, “Endless Night”. . . I prefer the Poirot books. The way she draws characters and innately understands that it has to work as a book first and foremost. I’ve read John Dickson Carr’s “The Three Coffins” [aka “The Hollow Man,”] and it was much more about the intricate puzzle he’s building. Christie is very character-based, and she had fun with her characters. That’s what’s driving her books. That appeals to me. With “Knives Out,” it was trying to structure it so it takes the onus off the whodunnit element and gets the dynamics of an empathy-driven Hitchcock thriller. So you actually care about one of the characters, and they are in peril and you’re leaning forward to see whether or not they make it out of it.

What was your approach to telling this story? It is tricky in terms of the plot, but also in the way the narrative unfolds, with lies and flashbacks. You bombard the audience with tons of information, clues, and red herrings. How did you manage not to overwhelm viewers? It’s a very nimble film.
I start very zoomed back. I start with an outline and work on that. Eighty percent of the process is outline. I need to know the shape of the film before I write, especially with this. If I can get the shape simple enough that it feels like a clear line, you start zooming in. That’s the goal — to keep it clear. But you have to remember the audience is experiencing this in a linear way. So it’s important to know scene to scene what’s driving the audience emotionally, and who they are following and why. If you can keep that clear, you can layer in all the information, and hopefully that won’t get overwhelming.

How did you use space to tell the story? You make things claustrophobic and shadowy though very little of the film takes place outdoors at night.
When you have a house like that and the whole movie revolves around the house, and you have a production designer like David Crank, who filled that house with so much detail . . . I gave him the reference of the 1972 film version of “Sleuth.” I said make this feel like the inside of Christopher Plummer’s brain. Unlike noir, where you rely on shadow and darkness, with this, the more you can illuminate and see, it’s about the richness and complexity of everything in the background, not the darkness of it all. The contained space is kind of like a game board.

You also add humor, “boo” moments, and a lousy car chase. How did you balance the tone and create tension both dramatic and suspenseful with these elements? That’s the magic, too.
That comes down to having it based on a character you care about at the center of it. People don’t care what the clues add up to — that’s fun — but if you like this person, and want them to get out of their predicament, the tension or the tautness of the movie lives or dies by that. So that’s getting in there with your wrench and doing the story mechanics. And it’s also casting someone like Ana, who gets the audience’s sympathy. There’s something about her on screen, you are just on her side.

What can you say about ensemble cast and playing to the actor’s strengths but also challenging them?
I like to cast an extraordinary actor and give them do something I haven’t seen them do before. Daniel Craig has done a broad character in “Logan Lucky,” but this is different. Chris Evans, I’d seen in a Kenneth Lonergan play, “Lobby Hero,” playing a real jerk, so I knew he could bring that energy to it. But Michael Shannon, who I’m used to seeing play very strong, intimidating characters, giving him a character to play who is fundamentally unformed and kind of weaker, that seemed interesting to me. But mostly, you want to find the balance of casting to an actor’s strength and not typecasting an actor based on what you’re used to seeing them do, because that’s boring.

Why should I believe anything you say?
DON’T!

Seriously, what observations do you have about unreliable narrators? And having a character who cannot lie? There is a line in the film about observing facts with your head or your heart. How do you determine the truth?
I work in the most truthful industry on the planet. [Laughs]. I think what you determine is perspective. In the context of a film, you are seeing any scene through a character’s perspective, and the clearer you can be to an audience about whose perspective it is, the more satisfying it is. What is especially fun about a whodunnit, is that in the classic questioning scene in the beginning, you’re working on two timelines — the present day and the night of — and the first timeline is constantly dipping down to investigate the second one through different perspectives. And you’re seeing different angles on that timeline based on who’s telling the story. That to me, is one of the most explicit investigations of perspectives, or of “truth.” It could be that these people aren’t lying — they just saw it differently. There’s a question where multiple people are asked about the birthday, and multiple people see themselves as the star of the [cake scene]. I don’t think they are lying about it; it is how they perceive the party.

Let me ask this—have you ever been involved in a crime?
I never have. I’m a wimp. I toilet papered houses in high school. I grew up as a youth group kid. We were way too good when we were young. I probably missed out on something. That may be why I’m so fascinated in telling these stories. Because to me, it’s another planet. The world of larceny, deceit, and crime is a foreign land. I get to take out my “Lonely Planet” guide and visit through these movies. I’m sure I’d have a very different perspective on it if I lived there.

Benoit Blanc says in one droll line, “No one has ever read ‘Gravity’s Rainbow.’” So, let’s see if he is right: Have you ever read “Gravity’s Rainbow”?
Twice! [Laughs] It’s one of my favorite books! There’s no way to admit that without sounding like a jerk.

"Knives Out" opens in theaters on Wednesday, Nov. 27.