If the Congressional Progressive Caucus won't stand up to the military-surveillance complex, what's the point? 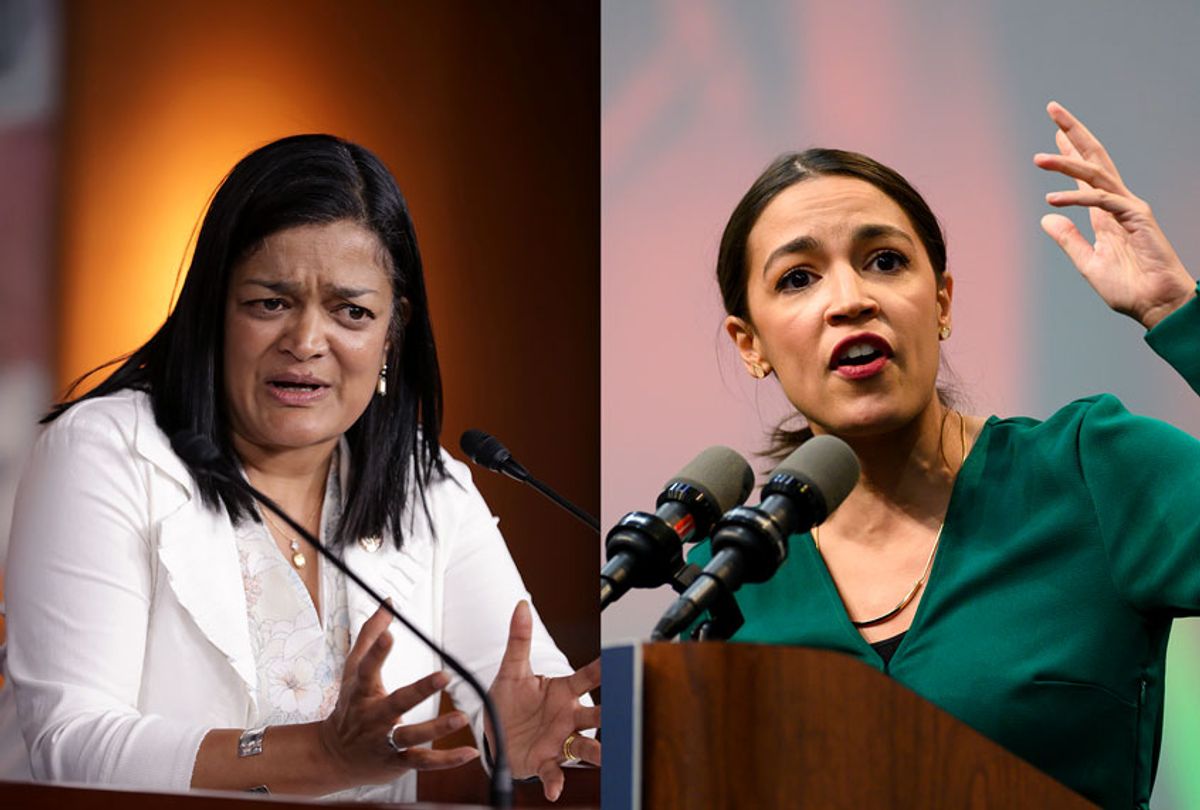 Last week, the Democratic leadership put an extension of the Patriot Act into a “continuing resolution” that averted a government shutdown. More than 95 percent of the Democrats in the House went along with it by voting for the resolution. Both co-chairs of the Congressional Progressive Caucus, Reps. Pramila Jayapal, D-Wash., and Mark Pocan, D-Wis., voted yes. So did all 11 of the CPC’s vice chairs.

It didn’t have to be that way. House progressives could have thrown a monkey wrench into the Orwellian machinery. Instead, the cave-in was another bow to normalizing the U.S. government’s mass surveillance powers.

“There’s no other way to spin this,” a progressive staffer on Capitol Hill told The New Republic. “This was a major capitulation. The Progressive Caucus has touted itself as an organization that can wield power and leverage the votes of its 90 members. And they didn’t lift a finger. Democratic leadership rammed this down their throats.”

A gag reflex was needed from progressive lawmakers, who should have put up a fight rather than swallow rationales for going along with Speaker Nancy Pelosi’s maneuver. With the Fourth Amendment on life support, basic civil liberties were at stake.

There were opportunities to push back — if CPC leaders had moved to throw down a gauntlet.

"You could go through and name any strategy for me, and I would tell you why it would fail,” Jayapal said. But if you don't put up a fight, you're sure to fail. And showing some strength on a matter of principle can build momentum while marshaling grassroots support in the process.

With a show of resolve, just a few dozen Democrats could have blocked the resolution. Instead, it passed the House on Nov. 19 by a 231-192 margin, thus extending the Patriot Act for three months instead of letting it expire.

“No” votes came from all four members of "the Squad" — Alexandria Ocasio-Cortez, Ilhan Omar, Ayanna Pressley and Rashida Tlaib.

One factor: Even the best progressives in the House spend a lot more time with congressional colleagues and leaders than they do with constituents. Call it an occupational hazard. Peer pressure and conformity tend to be cumulative. The power of the Democratic leadership is quite tangible and often stern, whereas the power of constituents is routinely diffuse and unrealized.

To the extent that progressives at the grassroots don’t effectively pressure members of Congress, party authorities like Pelosi and Majority Leader Steny Hoyer maintain a tremendous advantage. To the extent that avoiding conflict with the Democratic leadership is more important than standing up for principles, even the best progressive incumbents succumb to the Capitol bubble. Given the strength of that bubble, it can only be burst with methodical intervention from the grassroots.

In the case of the Patriot Act-laden continuing resolution, which President Trump signed into law shortly after passage, the contrasts between avowed commitments and conformist acquiescence were striking among many progressive luminaries in the House. A few examples:

It’s telling that Khanna, Lee, Lofgren and Jayapal — and so many other self-identified progressives in the House — chose to take the path of least resistance last week when faced with a choice of whether to buck their party’s leadership or facilitate the extension of the Patriot Act that they have long opposed. Heightening the sad irony is the fact that the newly reauthorized provisions have enabled far more aggressive surveillance than was envisioned when the Patriot Act first passed — at which time Lee, McGovern, Nadler, Schakowsky, Waters and others who just voted for the reauthorization felt compelled to oppose it.

Last week, they followed leadership that was determined to merge the odious act with the continuing resolution. An amendment, offered by independent Rep. Justin Amash of Michigan, would have separated the Patriot Act extension from the resolution -- but the House Rules Committee (chaired by McGovern), in step with Pelosi’s marching orders, killed that amendment.

If even 20 more House progressives had signaled a willingness to vote against the continuing resolution unless it was separated from Patriot Act reauthorization, they would have been in a strong position to demand standalone votes on each measure. That would have underscored serious opposition to the Act’s surveillance programs — enhancing progressive leverage in the House and increasing the chances of reform when the issue of further Patriot Act extension comes back to Congress in a few months.

Instead, leading progressive lawmakers chose to sidestep a historic opportunity to do the right thing by registering clear opposition to the Patriot Act. Such retreats end up eroding rather than building the power of the Congressional Progressive Caucus.

Rolling back key aspects of the military-industrial-surveillance complex cannot be accomplished without putting up a huge fight. Postponing confrontations with party leaders might seem prudent, but such caution has negative consequences. Sooner or later, grassroots activists become exasperated when Democrats in Congress don’t match progressive statements with actions. Just being a member of the Progressive Caucus is not enough.