9 ideas for what to do with Thanksgiving leftovers, Salon-style

Leftovers are a state of mind. They aren't detritus or carnage to be dismissed, but flavorful morsels of potential 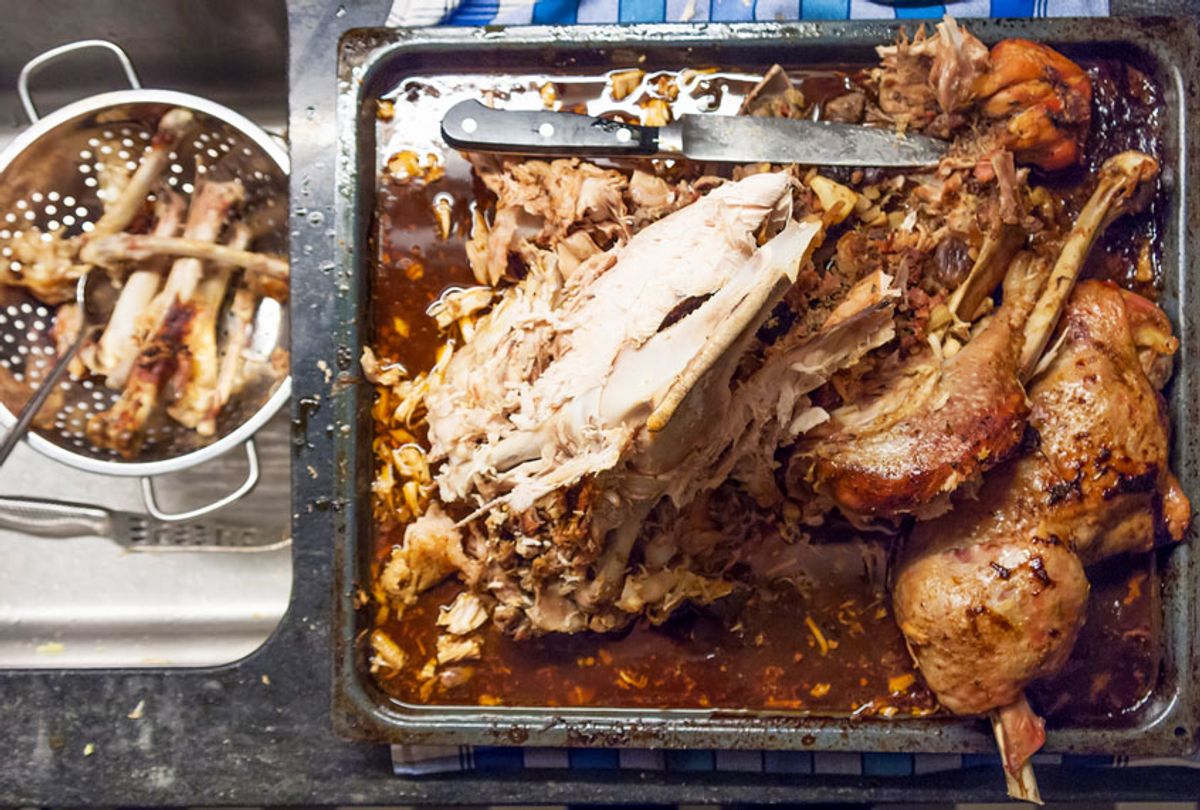 Leftover carcass and bones from a Thanksgiving turkey on an oven tray at the kitchen counter. (Getty Images)
--

So you survived Thanksgiving, navigating the conversations and getting that second helping of pie. And you know what comes after Thanksgiving, right? No, not the horrors of Black Friday but something much better: leftovers.

Leftovers are a state of mind. They aren't detritus or carnage to be dismissed, but flavorful morsels of potential. All the work is done. No more pleasing other people is required. By taking leftovers, you’re doing your part to not waste food. But they can also be the most personal representation of the holiday because leftovers – and what you decide to do with them – are all about you.

Below, check out the various ways that Salon’s staff has dealt with Thanksgiving leftovers. Maybe this will inspire a new tradition for you:

I don’t like Tupperware or plastic containers or big aluminum foil trays rapped in aluminum foil clogging my fridge so I give my leftovers to the less fortunate. My wife packs a plate or two for herself and will maybe whip up a raisin-less turkey salad if she’s feeling ambitions, but we give our food away to people who may need it more than us. – D. Watkins

Already Meal-Prepped
I always save them and use them as my meals for the next several days, so I can save money on food purchases for that week. – Matthew Rozsa

Second Thanksgiving
I usually bring any leftovers back to my apartment in Brooklyn and invite friends over for a second feast made up of allll of our leftover foods. – Shira Tarlo

Kentucky Hot Brown and a Burrito

Louisville, Kentucky, is home of the culinary monstrosity known as the Hot Brown, invented at the historic Brown Hotel by a kitchen staff looking for a crowd-pleasing late-night dish to feed guests who had danced their dinners off hours earlier. Yep, the local specialty is fancy drunk-people food. A Hot Brown is basically an open-faced turkey sandwich smothered in mornay sauce and topped with bacon and sliced tomato — here's the Brown Hotel's own recipe. A lightly modified version offers a handy way to repurpose Thanksgiving leftovers for a crowd: ditch the out-of-season sad tomatoes and top with a dollop of the bourbon cranberry sauce instead.

Hot Browns are great if you're in entertaining mode all weekend. But if you're enjoying a lazy long weekend, or working insane holiday hours in retail or service, go easy on yourself:

Tired: A homemade Famous Bowl, microwaved into submission
Wired: A Thanksgiving leftover burrito — wrap up a little bit of everything in a warm tortilla and roll out the door, or onto the couch. – Erin Keene

I come from a pretty large family who loves carbs (who doesn't?), so sides are usually the first things to go and I'm sent home with a Tupperware of leftover turkey meat. If I'm feeling virtuous, I transform it into a turkey, vegetable and rice soup. But if I'm still feeling a little indulgent in the spirit of the holiday, I use the turkey to make a Kentucky Hot Brown. I first found out about this decadent open-faced sandwich — made with toasted bread, velvety mornay sauce, carved turkey, sliced tomato and bacon — when I moved to Louisville and visited the historic Brown Hotel for the first time. First served by chef Fred Schmidt in 1926, this take on the Welsh rarebit quickly became a favorite post-party treat for the thousand or so guests who attended the hotel's parties. To me, it still feels really celebratory — a quality that's sometimes difficult to achieve with holiday leftovers. – Ashlie D. Stevens

I am a year round fan of the leftover, the kind of person who purposefully makes a little more of everything to extend the enjoyment of it. But Thanksgiving is tough — the food invariably isn’t that great to begin with. That’s why I leave the random pie slices and dregs of Stove Top to everybody else. Just give me that carcass to take home, where I can simmer it slowly with some onion skins and carrot peelings, for a rich broth that elevates dinners to come and never feels sloppy seconds. –Mary Elizabeth Williams

When we think of Mexican food here, we rarely think of Yucatecan food. My grandmother was born in Mérida, the capital city of the famous southern state. My favorite two regional foods are salbútes, which are similar to tostadas but with doughier, fried tortillas, and sopa de lima, a brothy soup whose flavor is heightened by locally-grown limes. While both dishes are traditionally served with chicken, we created a new Black Friday tradition by substituting leftover turkey in its place. Cumin and garlic transform the flavor palette from an American comfort food into a Mexican delicacy. - Joseph Neese

One of my first go-to recipes out of college was curry chicken, a recipe I learned oddly enough from my ex-boyfriend’s Swedish mother. It’s not sweet like a Japanese curry and yet not as complex as a true Indian yellow curry, but I’ve since modified it to add extra zing from the original version. I also love to make it very stew-y adding in hearty vegetables like zucchini and mushrooms (although if we’re talking leftovers, brussels sprouts or carrots would also fit). I find leftover turkey – no matter how dry – works great repurposed and slathered in the rich curry spooned over jasmine or basmati rice.- Hanh Nguyen