The environmental movement expects the cases of over 1,000 activists arrested last month will be discontinued 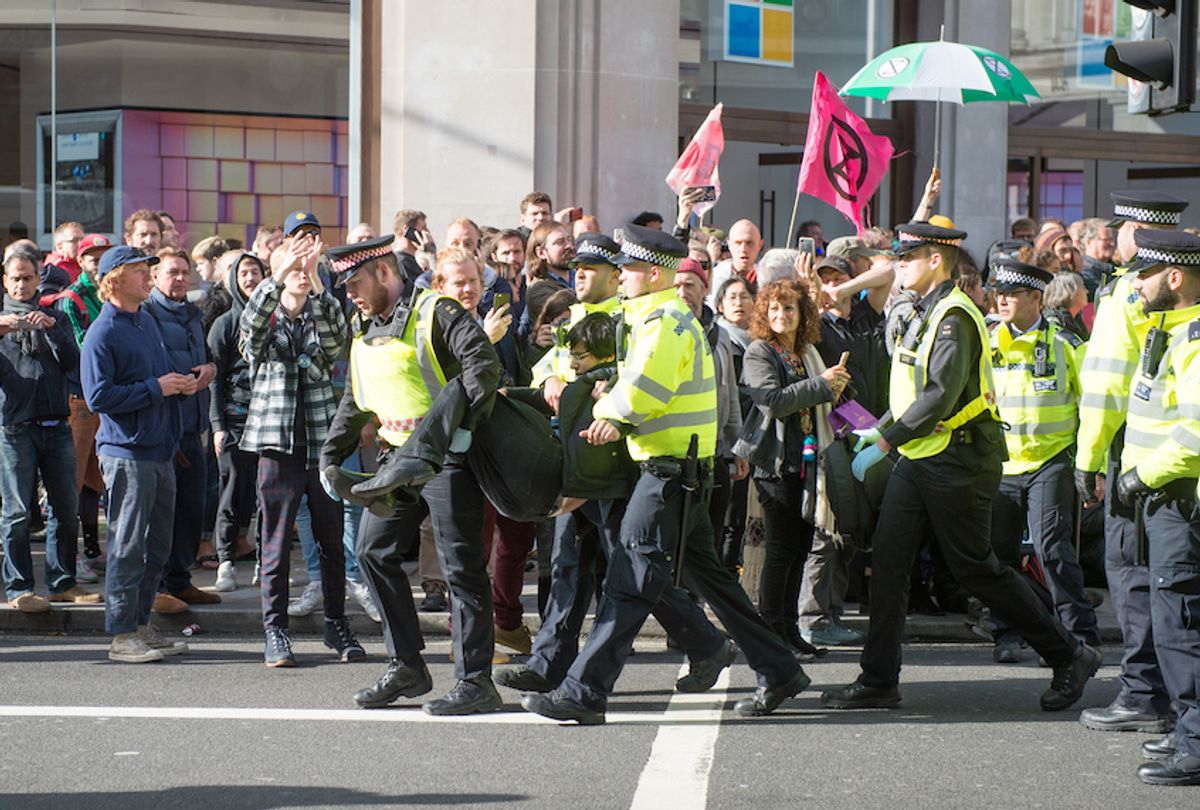 Police arrest an activist as hundreds of members of the Extinction Rebellion environmental activist group swarm Oxford circus with three activists erecting a road blocking wooden pyramid structure with an upside down tree hanging in the middle on October 18, 2019 in London, England. (Photo by Ollie Millington/Getty Images)
--

Extinction Rebellion and its supporters celebrated Wednesday after the agency that conducts criminal prosecutions in England dropped charges against 105 activists who were arrested in London last month for participating in the environmental movement's "Autumn Uprising" actions.

The Crown Prosecution Service's (CPS) decision to end the cases against Extinction Rebellion (XR) activists came after a high court in the U.K. ruledearly this month that a protest ban imposed by London's Metropolitan Police Service (MPS) under section 14 of the Public Order Act was unlawful.

"It is to be hoped that the police will, in future, take much greater care to act within the law and to balance the right to protest with their desire for public order," Martin Marston-Paterson, one of the XR activists arrested under the section 14 order in October, said in a statement.

"Extinction Rebellion is glad to see that the Met Police and the CPS have recognized the implications of our successful challenge earlier this month," said Tobias Garnett, a human rights lawyer in the movement's legal strategy team. "It underlines the need for proper policing that doesn't waste precious public resources."

These admissions of unlawful arrest, said Garnett, "affirm that when the people of this country assemble peacefully to demand action on the climate and ecological emergency the law is on our side."

A police spokesperson told The Evening Standard that "the MPS remains disappointed by the judgment, but of course respects the decision of the court" and will not appeal the ruling. Reiterating past calls for legislative updates, the spokesperson added that "the MPS will continue to carefully consider and review the use of this legislation during future demonstrations."

Ultimately, Extinction Rebellion expects more than 1,000 cases against XR protesters arrested in October will be dropped. According to The Guardian, the CPS confirmed that the cases discontinued so far include 73 defendants charged with breach of section 14; 24 charged with breach of section 14 and highway obstruction; and eight charged only with highway obstruction.

Welcoming the news Wednesday, Jules Carey of the London law firm Bindmans LLP said that "it is now clear that the policing of the Extinction Rebellion protests was a mess: the right to protest was overlooked, police powers were overstepped, and a significant clean-up operation is now required in the criminal justice system to deal with hundreds of cases that should never have been brought."

XR activists in the U.K. are now gearing up for holiday season protests to highlight the movement's three key demands:

On Saturday, Extinction Rebellion activists will launch nonviolent direct actions for "12 Days of Crisis," which will coincide with the U.N.'s COP 25 climate summit in Madrid and run up to the eve of the U.K. general election on Dec. 12.

"Rebels from Wales to Cumbria are set to ramp up the pressure on our politicians; from singing Crisis Carols and setting off Air Raid Sirens to occupations of high level political targets," XR said in a statement Tuesday. "The 12 Days of Crisis will kick off with a nationwide Sounding of the Alarm, and proceed with a series of powerful actions outside Political Party HQs and on the campaign trail."