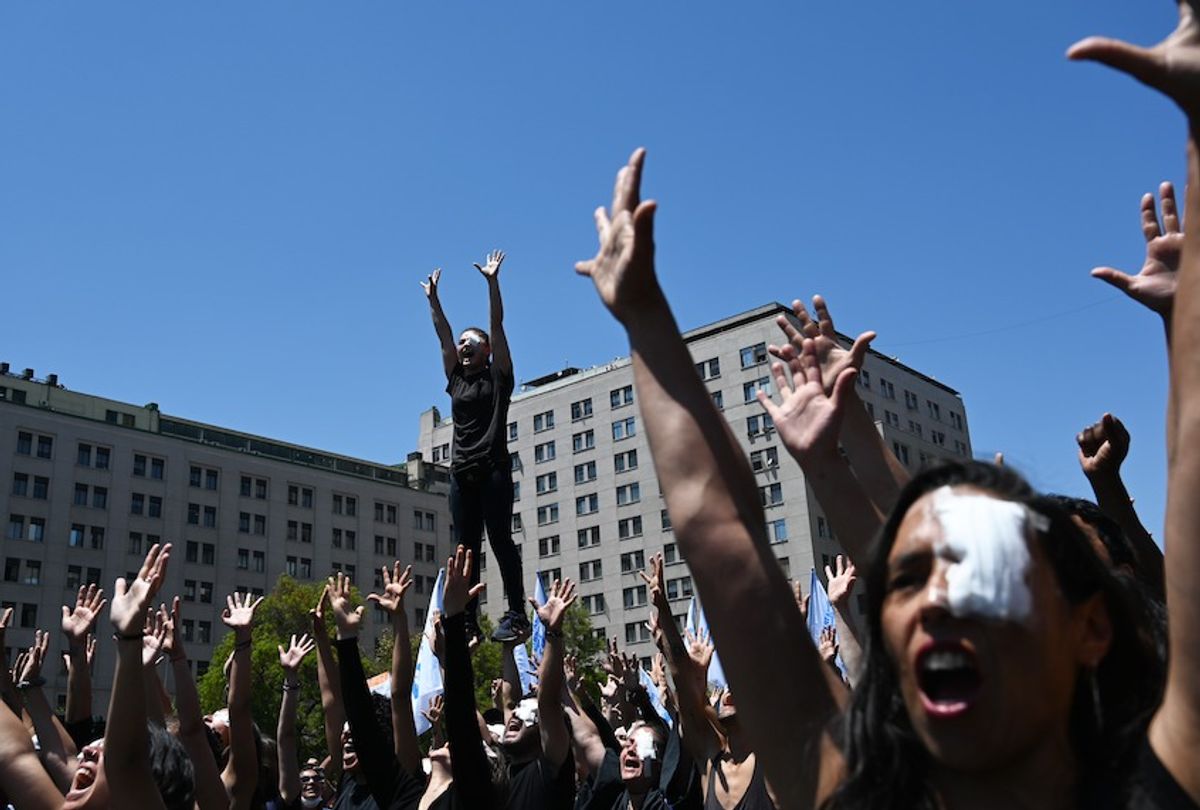 Demonstrators raise their hands as they perform against police violence after several demonstrators were injured in their eyes with pellets, outside La Moneda presidential palace in Santiago on November 12, 2019. (Rodrigo Arangua/Afp Via Getty Images)
--

“We are protesting against problems in the whole system,” a young Chilean protester said on TV in November. “Above all, the neoliberal system.” The increasing cost of everyday life drove more than a million people from numerous world capitals into the street. In October, Chilean protesters fought cops as buses were torched. Ecuadorians used satellite dishes as shields against police tear gas. In Lebanon, people barricaded roads and held mass sit-ins at state buildings. Since July, throngs of Haitians and Iraqis, frustrated at government corruption, filled the streets, even braving sniper fire and pulling down razor wire blockades.

The protests in the Global South reinforce those in the Global North, like France’s Yellow Vests and Spain’s Indignados. Now a possibility is emerging — a vision of a new internationalism that could upend nearly 50 years of neoliberalism.

The Chilean who threw a rock at an armored police van also struck the half-century ideology of neoliberalism. Even as today, governments send police in riot gear to defend that economic ideology, it’s worth remembering that it was first promoted by its authors as a way to protect individuals against the state – although the “state intervention” they were worried about at the time involved services and support that helped millions.

The idea of neoliberalism took shape during the Great Depression and after World War II, when economists Milton Friedman and Friedrich Hayek watched in growing dismay at “collectivism” or state intervention in the economy. In the 1930s, President Franklin D. Roosevelt dealt with labor strikes and widespread poverty by turning John Keynes’s ideas of government spending to stimulate a moribund economy into the New Deal. In 1945, Britain, facing a mass demobilization of soldiers and a people tired of war-time austerity, created a large welfare state. The U.S.S.R. was a superpower rivaling the West.

So Friedman, Hayek and others met in 1947 at Hotel du Parc and formed The Mont Pelerin Society to fight Keynesianism and Marxism. They believed the more power the state took, the less the individual had until it ended in totalitarianism. Hayek wrote in his 1944 book, The Road to Serfdom, “To achieve their ends planners must create power – power over men wielded by men – democracy is an obstacle to this suppression of freedom.” He and Friedman saw big government as a potential enemy of the people. It had to be kept small, they said. It had to be limited. Or it would turn on us.

Neoliberalism was a fringe idea, ignored until it became a useful tool for capitalists to reassert dominance. In the 1970s, economic convulsions from the 1973 oil crisis and stagflation scared the ruling class. David Harvey, in his 2005 book, "A Brief History of Neoliberalism," wrote, “In the U.S. the control of wealth by the top 1 percent of the population had remained fairly stable … but in the 1970s it plunged … the upper classes had to protect themselves.” They seized the ideas of Hayek and Friedman and put them into practice. With the election of Ronald Reagan in the U.S. and Margaret Thatcher in the U.K., neoliberalism became a hammer for the Global North to discipline domestic and international labor.

“The Great Depression produced massive suffering,” said Marxist economist Richard Wolff in an interview with Truthout. “There was a right- and left-wing reaction; both wanted to radically reorganize society. It ended in a victory of the left with the New Deal [in the U.S.] and social democracy in Europe — but they left the capitalists in the same position with every incentive to undo all the social programs just put in place. It’s like defeating an enemy but leaving them weapons.”

n a replay of history, late 20th and 21st century neoliberalism repeated the mistakes of the laissez-faire economics that led to the Great Depression. The top 1 percent pursued class dominance through market fundamentalism. In the U.S., the price of neoliberalism was a growing social divide and people falling between the cracks. It was pushed by Republicans and Democrats — from President Carter deregulating trucking, trains and airlines, to Reagan, who cut taxes for the rich and cut welfare, to Clinton, who cut welfare, established the North American Free Trade Agreement and removed the Glass-Steagall Act. The untold effects culminated in the 2008 Great Recession, which nearly melted the world economy and led to Occupy Wall Street.

Outside the U.S., the price of neoliberalism was state terror and dire poverty. In 1973, the U.S. backed a coup against socialist Chilean President Salvador Allende, which led to the killing of thousands of leftists. Chileans who studied under Friedman restructured the economy. It deepened inequality. In Haiti, the U.S. backed dictators Papa Doc Duvalier and his son Baby Doc who stole the nation’s wealth and rained down terror. A popular uprising threw Baby Doc out in 1986, but the U.S. returned in 2004 to force in a neoliberal-friendly regime. In July 2018, the Haitian government raised fuel taxes on an already desperately poor people. In 2003, the U.S. invaded Iraq and the Coalition Provisional Authority ran the war-torn country through the neoliberal gauntlet by eliminating taxes, privatizing 200 state-run companies and later privatizing the oil. Iraq was left in ruins. In 2017, Ecuador’s newly elected president Lenin Moreno vowed to continue the leftist program of his predecessor and subsidize the poor. Instead, he took a hard neoliberal turn and declared a cut to gas subsidies, new taxes and labor reforms to meet the terms of an International Monetary Fund loan. In 2019, Lebanon’s government leviednew taxes on WhatsApp, gas and cigarettes.

Neoliberalism, whether through the ballot or the bullet, has ripped up the post-World War II social contract and left nations teetering on the edge of collapse. Every time someone lost a job or faced a price hike, every time a person felt shame at being unable to afford a decent life, tension rose and simmered. State capitals floated on an invisible sea of gasoline, vulnerable to a spark. In Ecuador, Haiti, Lebanon and Chile, the sparks flew one after another — from a new tax to a bus fare hike to the removal of gas subsidies.

Are we seeing the rise of a new left internationalism? Is it possible that working class people will struggle together against the common enemy of neoliberalism? Can they unite across national borders, race and religion? If so, the time to strike is now.

“The decline of capitalism in the West is a product of capitalism,” Wolff added. “It means the future of the U.S. is laid out in the economic deserts of Detroit, Youngstown and Pittsburgh. There is no precedent on how people handle the reality of a long downward fall.”

If the protests in the Global North are often driven by a betrayal of a promised better future, and the protests in the Global South are often driven by raw exploitation, we may have entered a decisive phase where neoliberalism can be attacked from multiple angles. In his book, "The True Believer: Thoughts on the Nature of Mass Movements," Eric Hoffer writes, “It is usually those whose poverty is relatively recent, the ‘new poor’, who throb with the ferment of frustration. The memory of better things is a fire in their veins.” It may be an apt description of the millennials who entered a bankrupt West and were forced into a precariat existence. They were the vanguard of Occupy Wall Street in the U.S., the Indignados in Spain, the Yellow Vests in France and the protests in Puerto Rico.

In contrast, the protests in the Global South — where capitalism has ripped up raw resources, used cheap labor and divided society into a few rich and many poor — the demand is driven by a rebellion to protect what is most human. In Albert Camus’s book, "The Rebel," he wrote, “Rebellion: the sudden, dazzling perception that there is something in man with which he can identify … the part of himself that he wanted respected he proceeds to place above everything else … even life itself.” If one adjusts the gendered language, the point remains that the youth in the Arab Spring and now in Lebanon, Haiti, Chile, Ecuador and Iraq are not primarily fighting for a far-off promised future, but to live decently right now.

A new generation in the Global North and the Global South is rising up against neoliberalism. We may be at a precious and rare turning point in history. Marx wrote in the "Communist Manifesto," “What the bourgeoisie, therefore, produces, above all, is its own gravediggers.” If so, the fires raging in the city streets are where the ideas of neoliberalism are burning in a funeral pyre.