Impeachment as spectacle: To this point, it's stupid, dysfunctional and weird — like America!

Everyone involved in this sham understands Donald Trump is a crook. That's not the cause of our nation's problems 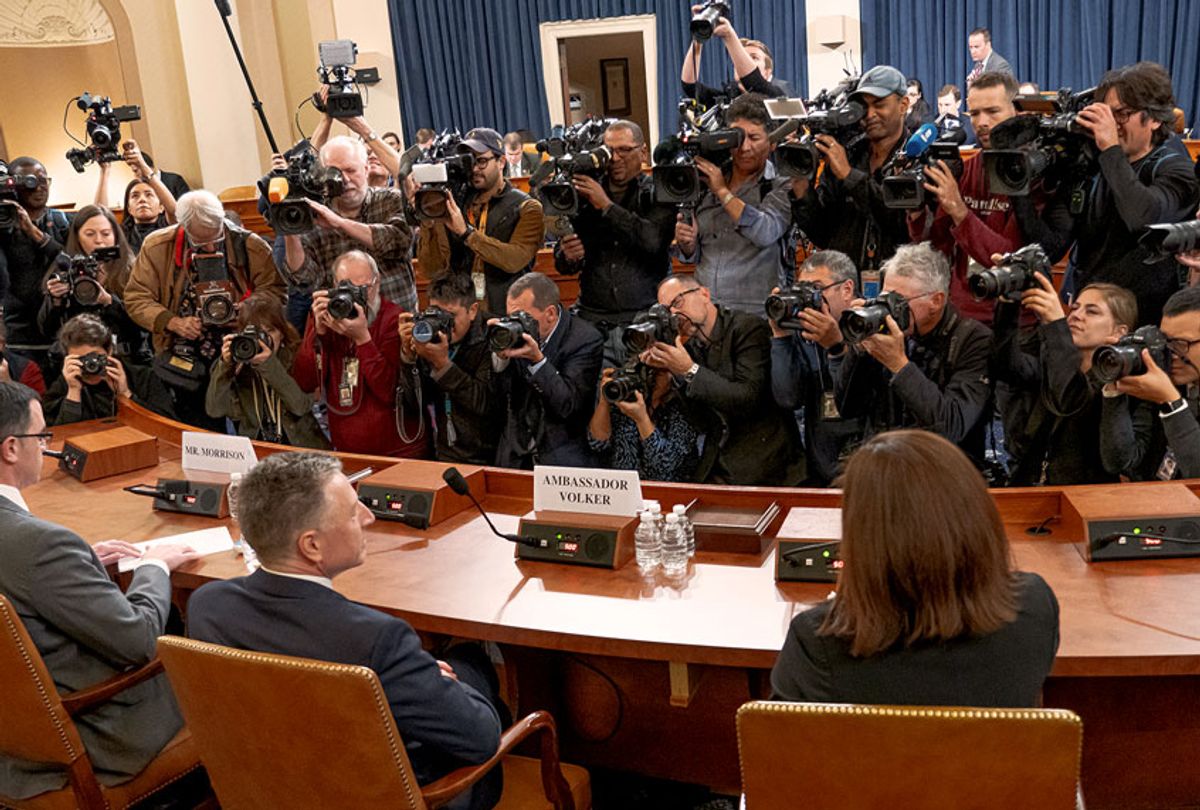 The House Intelligence Committee's impeachment hearings have been the perfect sweeps-season exhibition of American dysfunction, weirdness and stupidity. Democrats are meticulously proving that President Trump is an inveterate liar who broke the law by transforming international diplomacy into a partisan, tabloid dirt-finding expedition in exactly the buffoonish manner that anyone would expect. Trump is a corrupt con artist unqualified for a junior high student council. Impeachment and removal are beyond debate to anyone of minimal sanity. In other breaking news, the Earth orbits the sun.

More shocking than the extent of Trump’s petty corruption is the obsequiousness of leading Republicans, all of whom have publicly invested in the personality cult surrounding the former host of "Celebrity Apprentice." Apparently convinced that the country cannot survive without the leadership of the man who had the wisdom to fire Gary Busey in the boardroom, and later defend murderous white supremacists, the GOP have exposed themselves as lacking any of the principles — “family values”; belief in small, honest government; fiscal conservatism, patriotic loyalty to the laws and institutions of the United States — they previously boasted about.

House impeachment, and subsequent Senate removal, in any rational Congress would have taken all of four minutes, allowing the electorate to prepare for the alarming reality of President Mike Pence.

Instead, curious citizens are subjected to the monstrosity of Rep. Jim Jordan, R-Ohio, whose previous high-water mark was disregarding accusations of sexual abuse in the Ohio State locker room when he was an assistant wrestling coach, doing his best impersonation of a serious human being as he shouts about “process” in his shirtsleeves. Barring any bombshell, it looks as if the entire Trump fiasco will result in a repetition of the Bill Clinton episode — impeachment in the House, acquittal in the Senate.

That is not the only reason that the entire proceeding feels anticlimactic. It is deeply unsatisfying because it is focused on what is likely the least of Trump’s misdeeds.

At least 25 women have accused Trump of sexual assault – most of them alleging that he forcibly grabbed their genitals, which is precisely what he has bragged about doing on an open mic. Sexual predation and harassment are conspicuously absent from the congressional hearings on Trump, along with media dissection of his presidency. Occasionally, a pundit will casually reference the accusations as if they were nothing more than an unfortunate, but pedestrian reality of national politics. Rep. Katie Hill, a freshman Democrat, resigned over a consensual affair with a staffer, yet Trump faces no political consequences for, according to his credible accusers, a lifetime of assaulting women.

Defenders of the government’s inadequacy in the pursuit of justice might protest that none of Trump’s accusers have alleged any criminal behavior during his presidency. It seems odd that chronology would have any relevance — what if there was evidence that Trump murdered 25 women in the 1990s and 2000s? Would Congress have to ignore it? — but operating only within the confines of Trump’s term in office is equally devastating to not only his lack of leadership and character, but also to an impeachment that, while just and necessary, resembles the prosecution of Al Capone for tax evasion.

The last living Nuremberg prosecutor, Ben Ferencz, called Trump’s family separation policy at the border — ripping children out of their parents’ arms, locking them in cages, leaving them vulnerable to abuse — a “crime against humanity.” Explaining that it was “painful” for him to watch the news of the Trump administration’s cruel treatment of families seeking asylum, Ferencz said, “We list crimes against humanity in the Statute of the International Criminal Court. We have ‘other inhumane acts designed to cause great suffering.’ What could cause more great suffering than what they did in the name of immigration law?”

Ferencz’s outrage barely elicited coverage in the American press, and provoked a pathetically meek political response. The United Nations definition of “genocide,” formed in response to the Nazi holocaust of Jews and other minorities, extends far beyond murder. It also includes “forcibly transferring children of the group to another group.”

Genocide is not on the impeachment agenda.

What is on the itinerary, apparently, is a commitment to displaying many American failures of policy and cultural imagination without comment. EU Ambassador Gordon Sondland’s testimony that Trump orchestrated the bribery campaign against Ukraine was damning, but with the exceptions of Elizabeth Warren and Bernie Sanders, no one appears compelled to discuss why ambassadorial posts are always on sale to the highest donor — a bipartisan tradition that Republicans, as is their wont, elevate to unexplored heights of irresponsibility.

Everyone of conscience should feel grateful to Lt. Col. Alexander Vindman for helping to expose Trump as a criminal who wields presidential power for personal gain, but is it necessary and healthy to celebrate militarism while papering over unjust war?

Yes, Vindman is a lieutenant colonel in the Army. The “service” for which everyone is calling him a “hero” was contributing to one of the most reckless and immoral annihilations of human life in modern history — the illegal invasion and occupation of Iraq.

If by some miracle, the Senate actually convicts President Trump and removes him from office, Americans should applaud in the morning, but go back to protesting by the afternoon. The words that French journalist Claude Julien wrote following Richard Nixon’s resignation still ring true: “The elimination of Mr. Richard Nixon leaves intact all the mechanisms and all the false values which permitted the Watergate scandal.”