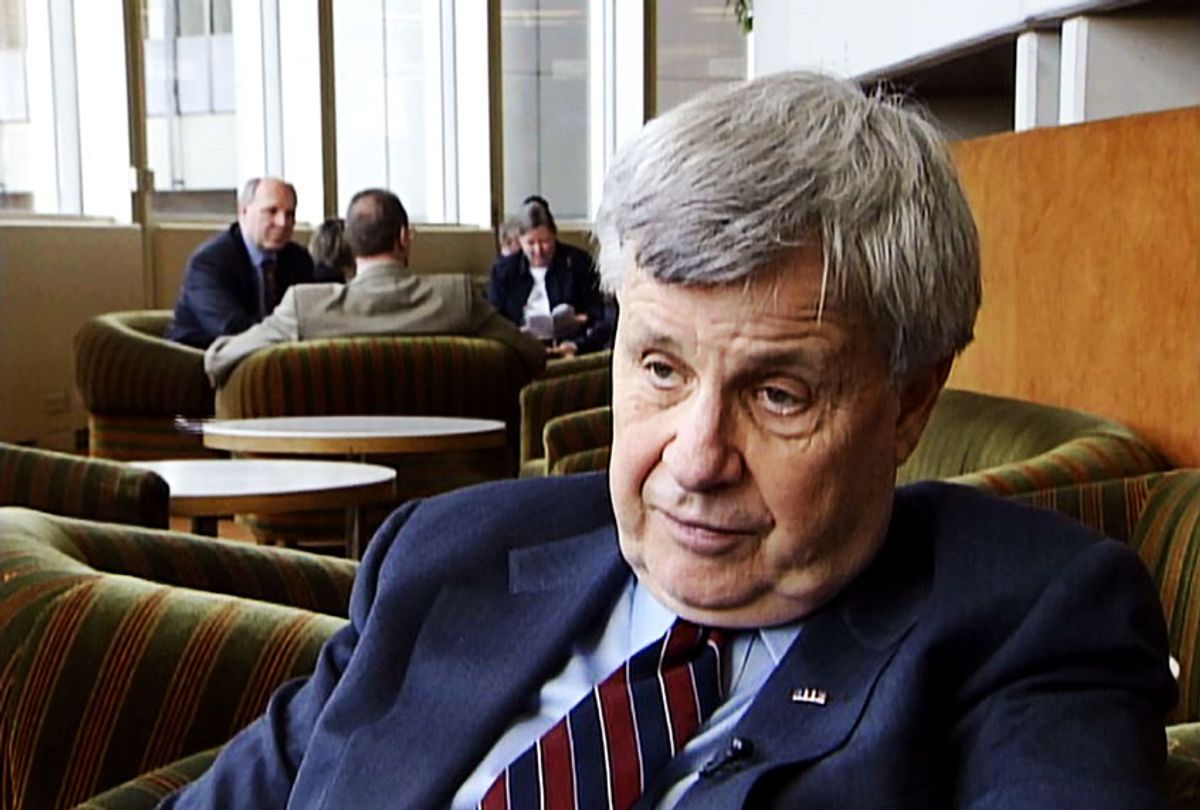 It is obvious even to the untrained eye that Donald Trump is mentally, emotionally and psychologically unwell. Trump has shown himself to be detached from empirical reality, vengeful, a compulsive liar and a probable sexual predator. He lacks empathy, care or concern for others, and possesses utter contempt for the rule of law, the Constitution and other restrictions on his behavior. In total — as leading mental health professionals have repeatedly warned — Trump’s behavior appears to be sociopathic.

For those and many other reasons, Trump merits impeachment and removal from office. But this state of emergency is also an opportunity for hostile foreign countries (especially Russia, led by Vladimir Putin, a former KGB officer) — as well as America’s “friends” — to advance their own interests over those of the United States by manipulating a psychologically vulnerable president.

Dr. Jerrold Post is the founding director of the CIA’s Center for the Analysis of Personality and Political Behavior. As the CIA’s head psychological profiler, he served under five American presidents of both political parties. Following his 21 years of service with the CIA, Post became a professor of psychiatry, political psychology and international affairs at George Washington University.

Post is the author of 14 books. His latest (co-written with Stephanie Doucette) is “Dangerous Charisma: The Political Psychology of Donald Trump and His Followers.”

In our conversation, Post explored how Donald Trump’s “dangerous charisma” fuels his authoritarian movement and his control over his followers. He also discussed the way that Trump and his followers are tied together in a powerful pathological knot of collective need and desire, whether Trump will leave office peacefully and how Trump’s malignant narcissism informs his political decision-making and relationships with foreign leaders. Post also addressed one of the key questions of the Trump presidency: Why is he so obsessed with Barack Obama?

As is customary, this conversation has been edited for clarity and length.

You were the head psychological profiler for the CIA. How do you make sense of Donald Trump?

A famous Canadian psychoanalyst observed, "The leader is the creation of his followers." This is a very powerful relationship. Indeed, many people have been puzzled, given Donald Trump’s extremism, that the support and the dedication of his followers to him has been not hugely diminished. Trump’s rallies, in particular, show an almost frightening intensity of the power of Trump’s charisma and influence over his followers.

For a core of his base Donald Trump provides them with many things, including permission to hate. It is a striking phenomenon. In his behavior Trump is also demonstrating some of the principles which are codified in his book on leadership style. Of note, some of these themes are derived from an important mentor for him, the late Roy Cohn.

There is another important aspect to Trump’s influence over his supporters and that is the model of the “charismatic leader-follower relationship.” This is the “mirror-hungry personality,” which comes from a wounded self. The other dimension of the wounded self is an “ideal-hungry personality.” In practice this means that Trump’s core enthusiastic followers feel incomplete without a great inspirational leader to attach themselves to, someone to venerate. The mirror-hungry personality, which is Donald Trump, needs the ego-gratifying applause and roars of approval from crowds. There is a natural psychological fit between Trump and his followers.

Donald Trump has the intangible of “star power.” He attracts attention. How does Trump use that charisma to control his public?

It reflects Trump’s crying out to his crowd at his rallies and granting them permission when he says things like, "Hey, you want to smash this guy in the face, don't you? And I'll pay all legal costs." The Charlottesville hate riot was another interesting example of how Trump has positioned himself vis-à-vis the far right. Trump finds a resonance with them. He stimulates the crowd with chants such as "Lock her up!" and “Build the wall!”  These all become powerful incentives for his followers to move to the extremes. It's almost as if Donald Trump is inciting these feelings. Donald Trump is connecting to feelings in his crowd — feelings that he is stimulating.

As I perceive this, Donald Trump’s supporters are in love with him. It is a deeply libidinal relationship that is common to fascist and other types of authoritarian movements. Is that analysis correct?

I totally agree with you. The danger is that such feelings, which are usually beneath the surface, are now being stimulated by Donald Trump. That is one of the reasons that there is such an inability to have civil dialogue between the right and the left in this country right now.

To criticize Donald Trump means that his followers must then criticize themselves. It is a very dangerous and disturbing dynamic.

One of the problems in changing the opinions of Trump’s followers is that there is a deep psychological cost involved for someone who has seen, in Trump, the answer to their problems. Therefore, for them to turn against Trump is very difficult.

As someone who has profiled political leaders, how would you assess Donald Trump?

If one were to subtract from the ranks of political leaders all those with significant narcissistic personality features, the ranks would be perilously impoverished. I see Donald Trump as representing the quintessential narcissist. Using that phrase, though, is not to make a diagnosis, but to say he has a preponderance of these traits. Someone such as Donald Trump with that trait has no capacity to empathize with others, no constraints of conscience. Donald Trump also demonstrates a paranoid orientation. Whenever anything goes wrong, there is someone to blame.

There is also unconstrained aggression. This is very important. Never apologize, never admit you're wrong. That is part of Donald Trump’s political style. But negotiating foreign policy is different from negotiating how to buy a skyscraper. Donald Trump also shows through his behavior a deep underlying insecurity. His grandiosity aside, Donald Trump is extremely fragile, and that trait is associated with extreme sensitivity.

In terms of a narcissistic injury, Donald Trump projects strength because he is in fact so weak inside. Trump’s supporters also feel weak and therefore they want to project strength as well — and that is why they are so devoted to Trump.

That is part of the ideal-hungry personality of his followers. But we should also note that there are two types of charisma in terms of leaders. One is the destructive charismatic leader who gains followers by polarization and by identifying an enemy. The other type is a more idealizing charisma, which both Martin Luther King Jr. and Gandhi represented. They are pulling together big crowds of followers but are doing so for positive goals. Charisma is a very powerful force when it's for the good.

By comparison, the dangerous, destructive charismatic leader polarizes and identifies an outside enemy and pulls his followers together by manipulating their common feelings of victimization.

If you were preparing a presidential briefing for a foreign leader who had Donald Trump’s personality profile, what would you focus on?

Yes, I have briefed presidents. A briefing would involve emphasizing areas to be avoided as well as finding places in common. Look at the success of Putin for example — and we don't truly know what, if anything, Putin has on Trump. Donald Trump seems to have been drawn to Putin in many ways. One truly does wish that they could understand what happened in these private conversations between Putin and Trump.

The other part of the preparation involves avoiding the areas which will be taken as potential slights and promoting the areas of commonality which are to be focused on.

And you cannot discuss how Donald Trump would approach diplomacy and foreign relations without also examining the personality of the person he's contending with. In this regard I find Trump’s interactions with Kim Jong-un of North Korea to be worrisome. One worries about the two of them stumbling into a spiraling conflict. Such a scenario would not be difficult to imagine.

Why is Donald Trump so obsessed with Barack Obama?

Donald Trump has a long-standing competitive streak within him. On one level, I think there are people who Trump greatly admires and indeed envies. He knows that to be true. He recognizes those feelings, then feels a need to destroy those people. Trump’s obsession with “birtherism” and Obama's parentage also suggests a bigger question about Trump’s insecurities. In recognizing the charismatic attractiveness of Barack Obama, and then needing to downgrade him, that shows how Donald Trump is very insecure and hides it with a grandiose facade.

How does a leader like Donald Trump approach a major crisis?

A general rule I apply is that as a man becomes older, he becomes more like himself. That is true with crises. In a crisis a person will magnify his psychological traits. A somewhat suspicious person can become paranoid, for example. In a major crisis, be it military, international or domestic, it will not bring out the best in a person like Donald Trump. A narcissistic leader will instead focus on protecting his historic legacy and ego. Because Trump is so volatile, he can easily miscalculate and have something horrible happen.

There is a major danger of miscalculation by Donald Trump because of his need to focus on, "What does this do for me?" Some crises are personal opportunities for Donald Trump.

If Donald Trump is impeached but not convicted, or loses the election in 2020, how will he respond?

In the last chapter of my new book I quote one of my favorite poems, which is, "Do not go gentle into that good night, but rage, rage at the dying of the light." I do not believe that Donald Trump will go gentle into that good night. In a close election, there is a very real hazard in terms of both potential outcomes. Should Trump win, as he did in 2016, he will make it a much bigger win and talking about the fraudulent election support on the Democratic side. But should Trump lose narrowly, I think we can be assured that he will not concede early. Trump may not even recognize the legitimacy of the election.

As for impeachment, should the Senate not vote to convict, Trump will take that as the indication that it was all somehow a “witch hunt” by the Democrats against him. Whatever happens, Trump will not go gentle into that good night.