Zelensky lays waste to key Trump defense for aid freeze: "You can't go blocking anything for us" 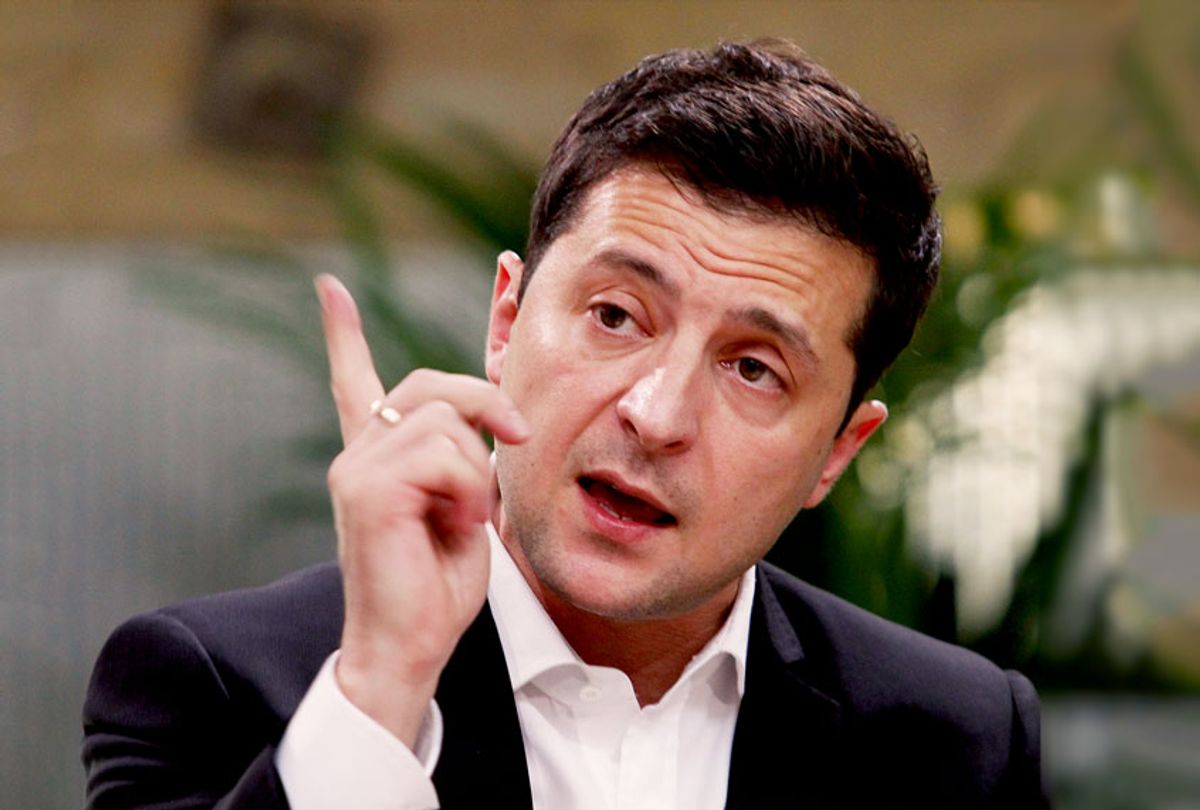 Ukrainian President Volodymyr Zelensky said in a new interview that he did not view his conversations with President Donald Trump in the context of a "quid pro quo," but he blasted the U.S. at the same time for tossing his country around "as part of some bargain."

In an interview with Time magazine and three European news outlets, Zelensky once again tried to distance himself from the impeachment inquiry centered on whether Trump sought to leverage military aid for Ukraine and a potential White House visit to pressure Zelensky to launch investigations into former Vice President Joe Biden and a debunked conspiracy theory about Ukrainian interference in the 2016 election.

"Look, I never talked to the president from the position of a quid pro quo. That's not my thing," Ukraine's president, Volodymyr Zelensky, said in some of his most pointed comments to date on the ongoing impeachment saga.

Nonetheless, Zelensky, a comedian-turned-president, expressed his frustration about the aid freeze.

"I don't want us to look like beggars. But you have to understand: We're at war," he added, referring to his country's military conflict with Russia and its proxies. "If you're our strategic partner, then you can't go blocking anything for us. I think that's just about fairness. It's not about a quid pro quo. It just goes without saying."

Trump mischaracterized Zelensky's remarks, applauding them in a Monday morning tweet as an exoneration and declaring that his Ukrainian counterpart had "just again announced that President Trump has done nothing wrong with respect to Ukraine and our interactions or calls." The president claimed that the interview should mean the case for impeachment was "over" and that Zelensky had said he "did absolutely nothing wrong."

Zelensky has maintained Kyiv's independence throughout the probe. Even as he questioned the fairness of freezing security funds in his weekend interview, he walked a line when talking about Trump.

"Despite getting caught up in the impeachment inquiry now folding in Washington, Ukraine still needs the support of the United States," Time's Simon Shuster noted.

Throughout his time in office, Zelensky has focused on ending Ukraine's war against Russia and its proxies, who control two separatist areas in eastern Ukraine's Donbas region. More than 10,000 Ukrainians have died as a result of that conflict, and the fighting continues. Attempts to resolve the crisis have stalled for more than three years.

In the weekend interview, Zelensky argued that support from the U.S. on the world stage is crucial in the face of continued Russian aggression. He pushed back on Trump's repeated claims about corruption in Ukraine, stating that they could have detrimental effects.

"The United States of America is a signal for the world — for everyone. When America says, for instance, that Ukraine is a corrupt country, that is the hardest of signals," he said. "Everyone hears that signal. Investments, banks, stakeholders, companies, American, European, companies that have international capital in Ukraine, it's a signal to them that says, 'Be careful, don't invest.' Or, 'Get out of there.'"

Corrupt actors exist in governments all over the world, Zelensky argued. He noted he would continue efforts to get the U.S. "to understand that we are a different country — that we are different people."

"I would never want Ukraine to be a piece on the map, on the chess board of big global players, so that someone could toss us around, use us as cover, as part of some bargain," he said. "As for the United States, I would really want — and we feel this, it's true — for them to help us, to understand, to see that we are a player in our own right, that they cannot make deals about us with anyone behind our backs."