Will Republicans be able to wipe Trump's crimes from the history books?

Sometimes conservatives admit giant fails. Sometimes they erase them. Which path will they choose after Trump? 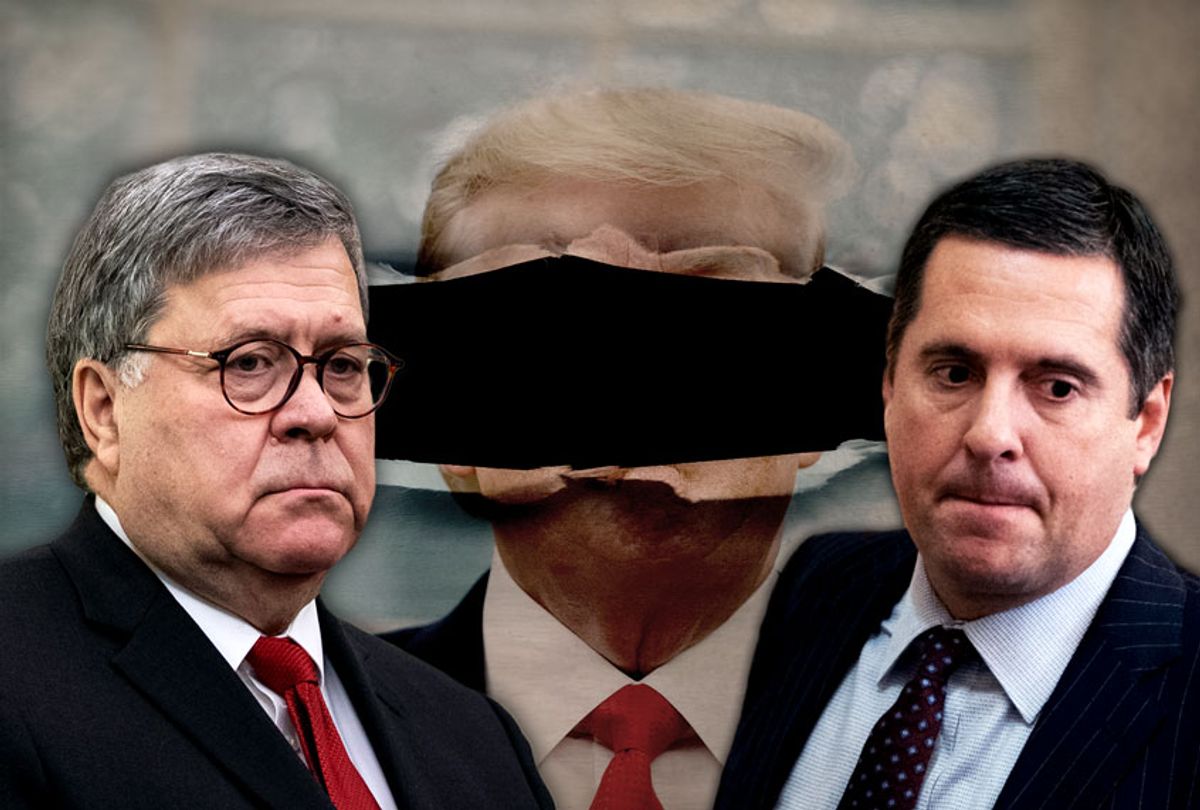 Having been boxed in by the overwhelming evidence of Donald Trump's guilt — on the Ukraine extortion campaign, on collusion with a Russian conspiracy to influence the 2016 election and on subsequent efforts to cover it up — Republicans have given up trying to carve out rational-sounding defenses for his criminal behavior. Instead, they've moved into the territory of simply denying reality, with little seeming interest in trying to make their lies sound plausible at all.

Republican members on the House Intelligence Committee just released what amounts to a "pre-buttal" of the truth, expected in the upcoming Democratic report. There is no attempt to engage with the actual evidence against Trump, just more spewing of conspiracy theories and lies meant to distract Trump's followers. The document shows, according to Stephen Collinson of CNN, that Republicans have fully embraced the Trumpian stratey of calling "on supporters to ignore the evidence of their own eyes."

Similarly, reports suggest that Attorney General Bill Barr is back to his old tricks of running cover for Trump's collusion with Russian intelligence and obstruction of justice. According to the Washington Post, Barr "disagrees with the Justice Department’s inspector general on one of the key findings in an upcoming report," which is that the FBI had ample reason to look into the Trump campaign's extensive Russian connections.

As with the GOP report from House Intelligence, this amounts to nothing more than a laughable assurance that the sky is not blue because it suits Trump to believe the sky is red.

What Republicans hope to accomplish with all this blatant lying in the short term is obvious: just enough excuses for Trump voters to repeat their grotesque transgression against decency in the voting booth in 2020. There appears to be no thought involved, beyond doing whatever it takes to keep power in November.

But that does raise the question of how conservatives imagine this playing out in the long term, particularly with regard to how the history books will think of this moment and the role Republicans are playing in it.

The overwhelming evidence against Trump is such that even some of the more cowardly mainstream media outlets are moving away from the "some say bears are bears while others say bears are sheep, and there's no way to know the difference" coverage and towards more substantive "yep, he did it" coverage.

Historians, we must hope, will have even less incentive to shy away from drawing the straightforward conclusion that Trump is super-duper guilty (of the Ukraine extortion and many other things). The upcoming failure to convict him in the Senate is an inarguable demonstration that the entire Republican Party has abandoned their duties to the rule of law. Trump's guilt and Republican complicity will be regarded as historical facts, at least in the traditional academic sense of the term.

But, as anyone who has dealt with conservatives before is aware, just because something is a historical fact doesn't mean it will be accepted as such by the right. On the contrary, there's a long-standing tendency in American conservatism of trying to erase, distort or otherwise confuse people about history, usually for the purpose of making their historical counterparts look better, or to make their current viewpoints seem less toxic.

One of the oldest and most egregious examples of this is the decades spent by conservatives seeding the myth that the Civil War was about an abstract debate over "states' rights," when, in fact, the Confederacy clearly and undeniably sought to secede in order to protect the institution of slavery. It's a lie that is up there with Holocaust denialism, in terms of its immorality. Sadly, it has had far more mainstream acceptance, and even more of a widespread social and political impact, than Holocaust denialism.

The ongoing fights over the Confederate war memorials — largely erected in the 20th century to intimidate black people, but justified with the same "states' rights" nonsense — is a testament to the way that a politically convenient lie can persist for decades, even in the face of overwhelming evidence contradicting it. Which raises a real concern that even after Trump is gone, conservatives — unwilling to admit that they made a mistake, and perhaps eager to double down on the politics of Trumpism — will move to rewrite history in the same way they are trying to rewrite the present, casting Trump as a hero and those who tried to stop his crimes as the villains.

It's an open question. There's plenty of right-wing blights on history — right-wingers being a major source of historical blight — that modern day Republicans don't try to erase from the record. There's no big push in the modern right to revise the history of Richard Nixon's Watergate scandal, for instance. And while some conservatives have tried to shift historical understandings by claiming that Joe McCarthy was right about the commies or minimizing the gains of feminism, mostly these efforts mostly haven't caught fire.

But some conservative efforts to revise history away from the facts have been disturbingly successful. The realities of lynching, race riots, and the successful campaign to deprive black Americans of property and wealth have been mostly erased from mainstream history. Only recently, under pressure from historians, activists and black journalists, has this forgotten history been revitalized in public. The civil rights movement and the segregationist policies it opposed have been harder to hide, so conservatives have tried to appropriate that history, claiming falsely to be the true heirs of the civil rights legacy and falsely accusing current anti-racists of opposing the vision of Martin Luther King Jr. and other social justice pioneers.

Notably, the parts of our history where conservatives have focused most of their energy, and have been most successful at distorting reality tend to be about race, although they have also waged counterattacks on labor, women's rights and environmentalism. Even now, conservatives are having a multi-month meltdown over the New York Times publishing a series of pieces about the legacy of slavery and racism, with an intensity they'd never bring to, say, a discussion of violent strike-breaking in the 19th and early 20th centuries.

All that makes the question of whether or not Republicans will eventually drop the "Trump is innocent" act an especially interesting one. On one hand, Trump's crimes are about corruption, the sort of thing Republicans often don't bother denying once it's drifted from the newspaper to the history books. We're seeing this happen presently with George W. Bush, where the same people who used to adamantly deny that he lied about WMDs in Iraq are largely — though not completely — giving up the ghost. It's easy to imagine a world where, once Trump is gone, Republicans move on and pretend they weren't all crazy about the guy and willing to tell any outrageous and ridiculous lie to protect him.

On the other hand, Trump's popularity on the right is due mostly to his racism. The lies Republicans tell may be about his corruption, but their purpose in telling them  is to protect the white grievance politics that Trump peddles. He might end up  being a figure somewhat like the Confederate generals, Klansmen and segregationists of old, whom conservatives trying to paint as noble heroes standing up for a valiant "lost cause." Even Ronald Reagan gets some glow from that, as the corruption of Iran-Contra is largely forgotten while conservatives exalt Reagan, who ran an ugly race-baiting campaign, as a legendary American hero.

Nixon was also a racist, but maybe not as overtly and ferociously so as Reagan, so Nixon doesn't get much of a fierce defense from the modern-day right. Also, Nixon resigned in disgrace while Reagan served two full terms, making it a lot easier for conservatives to play dumb about Reagan's likely corruption.

Where will Trump land on this scale of conservative historical revisionism? Will he be lauded as a hero? Will the evidence against him be denied by conservatives for generations to come? Or will they give up trying to defend the indefensible once the immediate political need for it comes to an end? It's genuinely hard to predict, but whatever direction they choose to go will say a lot about what conservatism in a post-Trump world will look like.