The actor, writer, and producer spoke to Salon about how making "En Brazos de un Asesino" was risky business 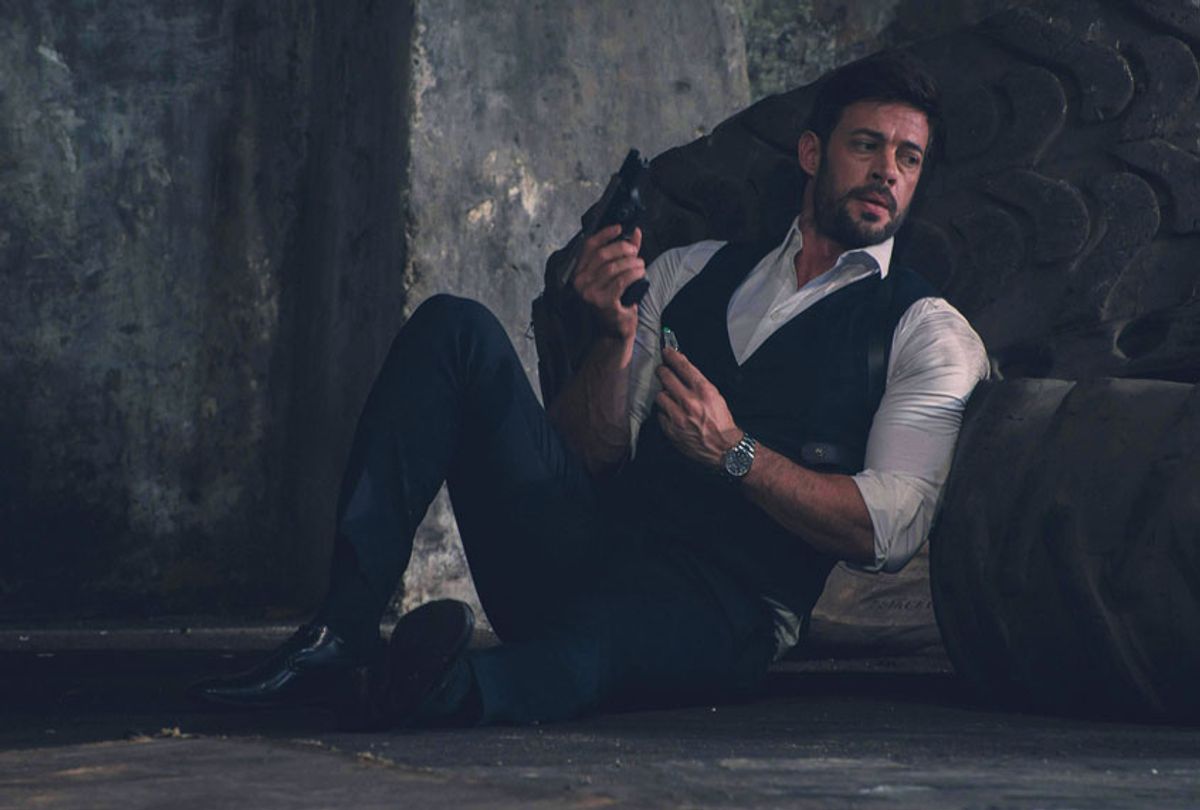 Oozing sex appeal, and positioning himself as a badass, Cuban model-turned-actor William Levy is striving to achieve crossover success with “En Brazos de un Asesino” (“In the Arms of an Assassin”). The Latin sex symbol is deeply invested in the Spanish-language action-romance, in which he stars , co-wrote, and co-produced under his production company, William Levy Entertainment.

The story, adapted from J.A. Redmerski’s suspense novel, “Killing Sarai,” opens with hired assassin Victor Faust (Levy) making a deal with Javier (Robert Sosa), a Mexican drug lord, to kill his rival. As he leaves, however, Victor encounters Sarai (Alicia Sanz) hiding in his car. She is looking to escape after being held captive by Javier for nine years. While Javier hunts down Sarai, his “favorite,” Victor tries to keep her safe — and himself alive. Eventually, a relationship develops between Victor and Sarai, but the couple are soon plunged into unchartered territory.

Levy proves here that he could be the next Brad Pitt or James Bond. “En Brazos de un Asesino” derives its many pleasures by having the sizzling Levy swaggering through the film, dispatching bad guys with ruthless efficiency in nimble action scenes. He also sports a natty vest and a crisp white shirt that never seems to get stained. And yes, Levy does manage to take that shirt off in the second half to reveal his washboard abs. But Victor has a moral code — he won’t kill an innocent person — that gets tested over the course of the film. While his character is laconic, Levy exudes charisma because he is cool and totally in control.

If “En Brazos de un Asesino” plays like one the telenovelas that launched his acting career, that's because Levy knows how to showcase himself well in the action and sex scenes. The actor talked with Salon about his new film, crossover success, and being a sex symbol.

You adapted a novel for “En Brazos de un Asesino.” What made this story the right project for you — that you wanted to write your first screenplay, produce the film, and star as Victor?
It’s a very good book, and we did our best to make the film as close to it as possible. One of the things I wanted to do with my company is to create content for the Latin market. I want to do something for our people and I’m happy I can do this. When it comes to my career, I wanted to do something different, get out of my image from TV, and this character, Victor, was perfect for that. I could break every stereotype in my career. It's appealing for audiences — it has suspense, action, and romance in the same film. I am excited about where I am going in my career. I like taking risks.

What about making the film was risky?
A lot of people said I shouldn’t do it in Spanish; I should do it in English [to appeal to a wider American audience]. Most Spanish-language films for the Latino market are comedies, or family-oriented, or romantic comedies. I am doing the opposite. But when it comes to doing something I love, it’s worth the risk. This role will put me out there and show a different me. When they say, “He doesn’t look like he can do that” — this role can prove that I can.

I hope Hollywood takes notice. Latinos are the largest minority moviegoing audience in the U.S. [According to the Motion Picture Association of America's THEME (Theatrical and Home Entertainment Market Environment) report, in 2018, 24 percent of Hispanics/Latinos were frequent moviegoers relative to their proportion of the overall population. 18 percent.] I believe this are why films like “Fast and the Furious” became such a huge franchise.
We are the No. 1 audience for movies, and producers don’t understand that. We want to bring films to our market. But we are not being offered the amount of opportunities for our audience. We only have 3-4 percent of lead roles for Latinos in Hollywood. But little by little, we will achieve our dreams.

Victor plans everything out carefully. You seem to be taking control over your career with this film. Do you feel a need to establish a production company and write your own roles to achieve crossover success?
I found they [Hollywood] kept offering me roles that are not the ones I love or want to play. I have a limit to what I will do. I wanted to try something new, and open different doors in my career. I was hitting a wall. You believe it’s not going to change. I come from a country where I knew I didn’t have a future, and it was up to me to change my fate and my life. I put myself on a raft when I was 14 and I got political asylum in the U.S. I did not wait for the [Cuban] government to change their laws. I’m not waiting for anyone to give me or Latinos an opportunity. I’m going to make it happen. We are being underrepresented in the American market. I want to give something to my audience, which are mostly Latinos. They made me. I’m pushing for that.

You’ve appeared in American films like “Addicted,” “Resident Evil: The Final Chapter,” and “Girls Trip,” among others. What can you say about your Hollywood experiences? Have you experienced discrimination or racism as a Latino? I can see you in Brad Pitt parts — but I don’t.
The only roles I get are ones where I don’t look Latino. What do we, Latinos, look like? I’m told I don’t have the features or image of a Latino! I don’t understand that! I am Cuban! I established my career in Mexico. How am I supposed to look?

You are ridiculously good-looking. You worked as an underwear model. You seem to find excuses in the film to take your shirt (as well as your pants) off — and you wrote the film!
[Levy laughs]

What observations do you have about using your sex appeal to attract viewers? Do fans expect you to display your body?
I think it’s normal for there to be sex appeal. I don’t mind taking my shirt and pants off. It’s a f**king role. It’s acting. I don’t pay attention to that. I really want to do different things and I don’t get that opportunity because I’m Latino in the American market, or I have another image. That’s why I am where I am.

There are some nifty action scenes in the film. What can you say about the physicality of playing an action hero, shooting guns and doing your own stunts?
I wish a lot of producers see that — not only in me, but in other Latinos. We’re hungry to work. We have proven that we support the industry and love American culture. And I believe Americans love Latin culture. We need to find a point in the middle, where we get those opportunities to have superheroes and understand our market and industry. It’s starting to change. We have to keep pushing in a good way.

How difficult was it to make the film—finding money, etc.?
It’s very hard. I didn’t pay myself as an actor or writer or producer. I invested a half million dollars to get this film made. I wanted to do it to show and prove to the studios that can produce a low budget movie with high production values. It’s hard to do that. You have to make sure every cent is on the screen. I had to pull a lot of favors to get crews.

What is the appeal of drug lord stories? How do you think these narratives reflect Latin culture and society?
I think it’s something that’s happening everywhere in the world. Not only in Mexico and Latin America, it’s across continents. We touch on it here, but it doesn’t only happen here. You have to accept the reality. I don’t want people to only see this about the culture. I read a book and I liked it, and it’s a fun story. Some people may think all Latinos are like that — of course they aren’t — but all Latinos are working in the film. I want people to work and show their talent in front of and behind the camera. I feel that responsibility to my audience.

Victor is described as a discreet and strange man. We don’t know much about him. How did you identify with and approach this character, a quiet assassin?
There’s a lot of s**t in his world, and I wouldn’t mind taking care of business. There are a lot of bad people, and justice isn’t enough. His code is not to kill innocent people. Whoever goes down deserves to go down. Sometimes you do want to take justice in your hands — you shouldn’t — but you want to. I could easily be a guy who defends good people, but I also believe there’s not much I can relate to because I’m not that serious in real life. I like to have a good time. I related to his code. He’s believes in justice.

What observations do you have about Victor’s relationship with Sarai?
Victor sees Sarai is fragile and understands where she comes from. She’s innocent, but she says she’s not innocent. Victor says, “If you weren’t innocent, you’d be dead already.” He does get involved emotionally with her. He wants to protect her.

Yes, I like Victor being a protector and having a moral code. Even when he is asked by an Italian to do something questionable, Victor exudes cool calm efficiency. What is your vulnerability?
Sometimes I feel that you want to take justice into your hands. I have kids. I can’t imagine them being kidnapped. You want to put those [bad] people in their f**king place. It’s not good to be badass with a kid. Those things get me. Where I come from [Cuba], we would get a half a chicken per person once a month. I grew up in a way that was very sensitive — it was a wound. You touch it and you react. I came from an unjust government that decides for you what to do, when to eat, and how much to eat. You study to be a doctor or a lawyer and make $2-3 a month. Coming from a world like that . . . I’m very vulnerable when I see injustice.