Law professors to Congress: So impeach the MFer already 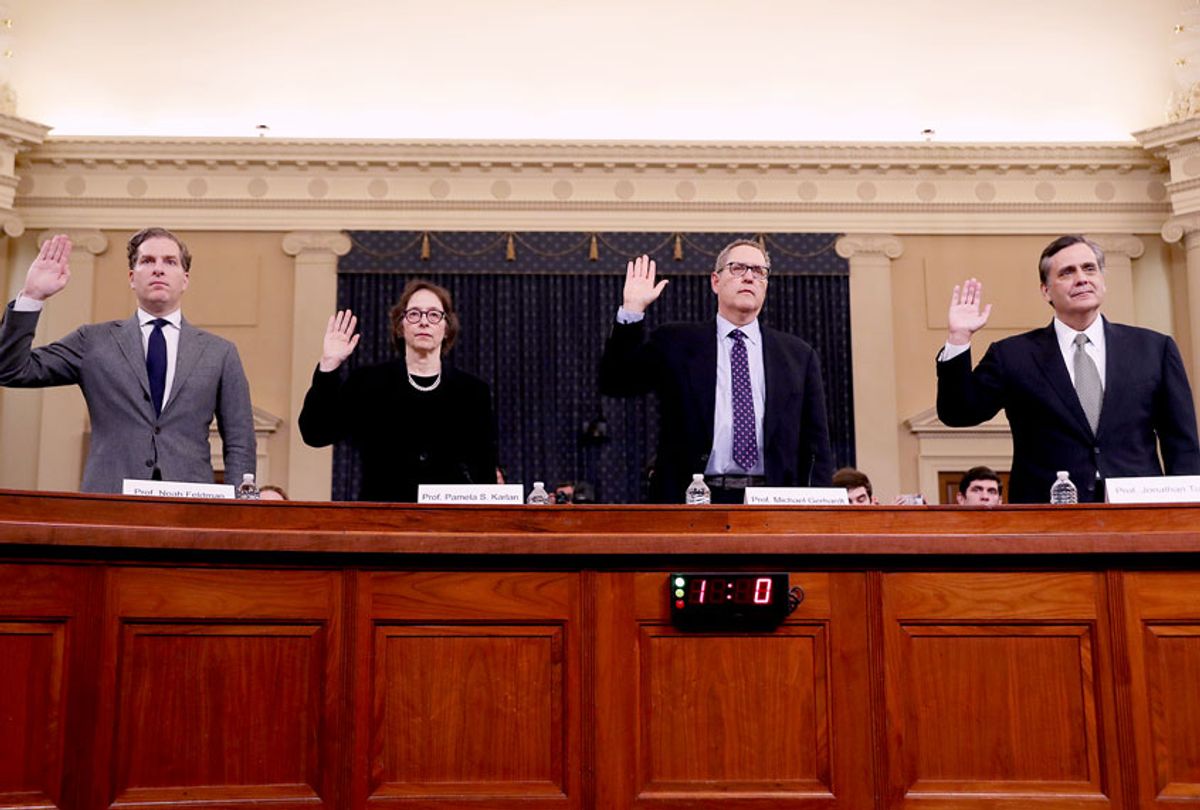 Constitutional scholars Noah Feldman of Harvard University, Pamela Karlan of Stanford University, Michael Gerhardt of the University of North Carolina, and Jonathan Turley of George Washington University are sworn in to testify before the House Judiciary Committee in the Longworth House Office Building on Capitol Hill December 4, 2019 in Washington, DC. This is the first hearing held by the Judiciary Committee in the impeachment inquiry against U.S. President Donald Trump, whom House Democrats say held back military aid for Ukraine while demanding it investigate his political rivals. The Judiciary Committee will decide whether to draft official articles of impeachment against President Trump to be voted on by the full House of Representatives. (Chip Somodevilla/Getty Images)
--

On the first day of impeachment hearings in the House Judiciary Committee, following the fact-collection hearings last month held by the House Intelligence Committee, one thing was certain: Republicans are terrified that people might actually watch this thing. From the very beginning of the hearing, GOP members kept throwing out BS procedural objections and forcing votes, clearly hoping that curious viewers would get bored and turn the hearings off before hearing any testimony.

We'd better hope it didn't work. While some (including myself) feared that Wednesday's hearing — featuring four law professors talking about the legal and historical aspects of impeachment — was going to be boring, it was actually as interesting, if not more so at points, than the direct witness testimony heard in November.

Instead of getting mired in legal dithering, the three law professors called by Democrats were clear as a summer's day in their opinions: Donald Trump's behavior is absolutely impeachable, and furthermore stopping presidents from doing what he did was the main reason why the founding fathers wrote impeachment powers into the damn Constitution in the first place.

"On the basis of the testimony and the evidence before the House, President Trump has committed impeachable high crimes and misdemeanors by corruptly abusing the office of the presidency," Noah Feldman, a Harvard law professor, explained.

As Feldman, along with Stanford law professor Pamela Karlan and University of North Carolina law professor Michael Gerhardt, repeatedly and clearly explained, the primary concern of the men who drafted the Constitution, when giving Congress the power to impeach, was literally that a president would try to undermine American elections by seeking foreign interference. Which, if you've been following along, is exactly what Trump did when he tried to bribe and/or blackmail Ukrainian President Volodymyr Zelensky into publicly smearing former Vice President Joe Biden, Trump's potential opponent in the 2020 election.

"One of the key reasons for including an impeachment power was the risk that unscrupulous officials might try to rig the election process," Karlan explained.

"If left unchecked, the president will likely continue his pattern of soliciting foreign interference on his behalf in the next election, and of course, his obstruction of Congress," Gerhardt warned.

That last quote points to one of the more intriguing developments on Wednesday: House Judiciary Chair Jerry Nadler, D.-N.Y., shaped the hearing toward justify expanding likely articles of impeachment beyond just the Ukraine scandal, to include articles based on Trump's corrupt or criminal behavior with respect to the 2016 Russian conspiracy to hack into Democratic Party computers and interfere with the presidential election.

"The president welcomed that interference," Nadler said during his opening statement."When his own Department of Justice tried to uncover the extent to which a foreign government had broken our laws, President Trump took extraordinary and unprecedented steps to obstruct the investigation, including ignoring subpoenas, ordering the creation of false records, and publicly attacking and intimidating witnesses."

Special counsel Robert Mueller released his report in April, showing both that Trump's campaign had colluded with Russia (though there was insufficient evidence for criminal charges of conspiracy) and that Trump aggressively obstructed the investigation into that collusion (which is the likely reason for that lack of evidence). Since then, Nadler has been increasingly vocal about his belief that Trump should be impeached for this obstruction.

Nadler's requests were rebuffed, at first, by House Speaker Nancy Pelosi, who clearly feared that impeachment would backfire politically on Democrats. She only changed her mind after it was revealed that Trump, having benefited from Russian interference in 2016, was hoping to force Ukraine to do him a similar "favor" in 2020.

So Wednesday's hearing was something of a rebuke to Pelosi and other Democrats who had been hesitant to impeach Trump back then: You failed to impeach him for that, and so, of course, he did it again — but this time, it was even worse.

Both Gerhardt and Karlan made comments backing up Nadler's implicit point. Karlan even implied, none too subtly, that Trump's behavior verges on treason, arguing that the founders defined treason as "putting a foreign adversary’s interests above the United States." Trump has done that repeatedly by subverting U.S. interests in ways that benefit not only himself, but Russian President Vladimir Putin.

Gerhardt's focus was more on how Trump got away with his extensive obstruction of justice during the course of the Mueller investigation, obstruction that the president has defended, Gerhardt said, with "the assertion that he is above the law."

But as all three of these professors made clear, impeachment was put in the constitution by the founders so that presidents, who are not kings, cannot be above the law.

James Madison, Feldman reminded viewers, said that it was "indispensable that some provision should be made for defending the Community against the incapacity, negligence or perfidy of the chief Magistrate."

Among Madison's chief concerns was the possibility that a president "might betray his trust to foreign powers."

In their turn, Republicans called Jonathan Turley, a law professor at George Washington University who loves the cameras almost as much as Alan Dershowitz does. His argument against impeachment can be boiled down to, "U mad, bro?"

"I get it. You're mad. The president is mad. ... my wife is mad, my kids are mad, even my dog seems mad," Turley said, in condescending tones, arguing that because people are angry, they cannot think rationally.

It was a particularly odd argument, given that it's Republicans who tend to use shouting and displays of anger to hide the fact that they have no reasonable defenses for Trump's conduct, while Democrats have spent weeks calmly laying out evidence before the nation. For whatever reason, this is the line Republicans are going with: Democrats are too emotional to be taken seriously.

Judiciary Committee ranking member Doug Collins, R-Ga., claimed that the investigation of Trump didn't begin with any real evidence "It started with tears in Brooklyn" on election night in 2016, Collins, loudly proclaimed, condemning the presence of emotions in liberals in a rage-fueled volume that sent my cats flying off the couch.

It sounded like another variation of the "get over it" argument that acting White House chief of staff Mick Mulvaney offered in October. Of course, even as Mulvaney was trying to act tough, he was confessing to the crime of withholding aid from Ukraine to extort their leaders.

Similarly, Turley's attempt to shame Democrats for being angry with Trump over his crimes came pretty close to an implicit admission that he had actually committed them. Indeed, Turley conceded in his testimony that the "use of military aid for a quid pro quo to investigate one’s political opponent, if proven, can be an impeachable offense."

In truth, if people are mad about this president, that's just evidence they're paying attention. Anger isn't clouding anyone's vision. Anger is the rational response to Trump's criminal behavior — all of Trump's criminal behavior. Which includes, at a bare minimum, Trump's obstruction of Mueller's investigation, as well as everything that's been turned up regarding Trump's extortion campaign against Ukraine.

Despite concerns that the House Judiciary hearings would be a train wreck, the first day shows that Nadler has a handle on things. His witnesses did more than simply provide facts. They wove those facts into a narrative that explained not only why what Trump did was wrong, but why, as Feldman put it, this situation was "precisely what the framers anticipated" when they created the power of impeachment.

Or, as Gerhardt said during questioning, "If what we’re talking about is not impeachable, nothing is impeachable."