Needed: A Ukrainian-style "Revolution of Dignity" for the U.S. 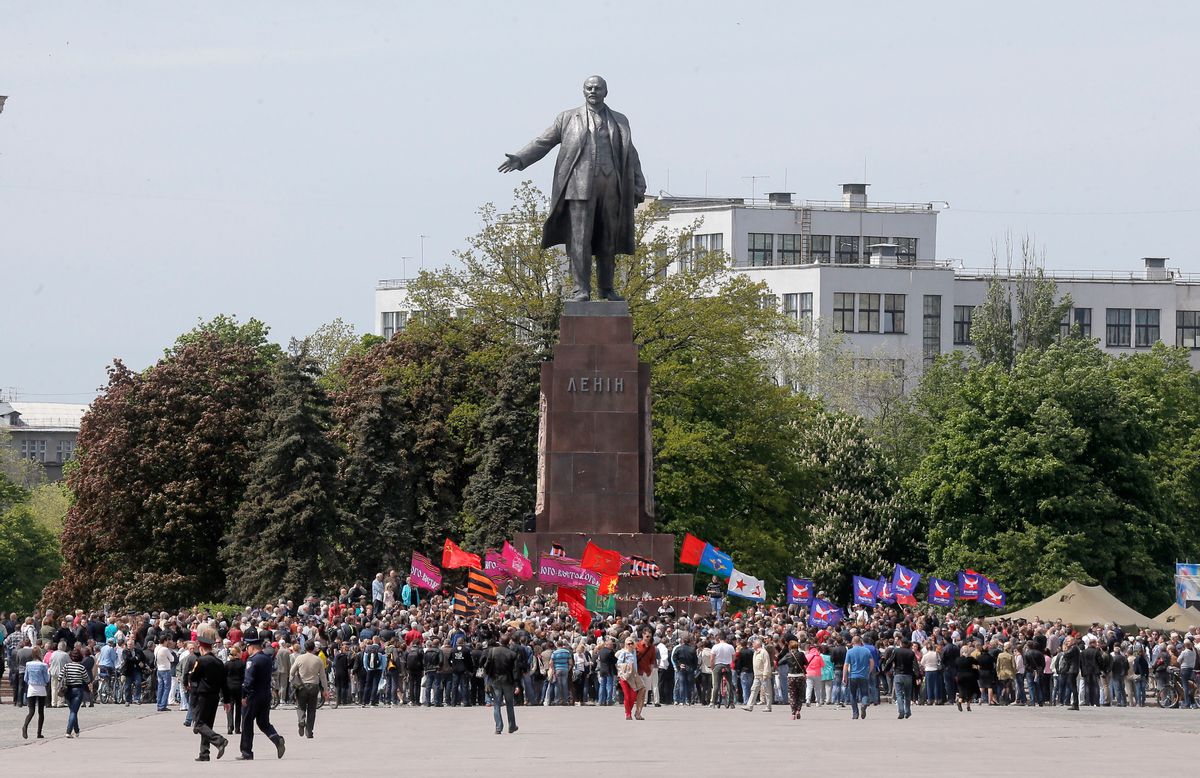 Ukrainians take part in a rally in front of a monument of Soviet revolutionary leader Vladimir Lenin, during a Victory Day celebration, which commemorates the 1945 defeat of Nazi Germany, in Kharkiv, Ukraine, Friday, May 9, 2014. Putin's surprise call on Wednesday for delaying the referendum in eastern Ukraine appeared to reflect Russia's desire to distance itself from the separatists as it bargains with the West over a settlement to the Ukrainian crisis. But insurgents in the Russian-speaking east defied Putin's call and said they would go ahead with the referendum. (AP Photo/Efrem Lukatsky) (AP)
--

For all the attention paid to the innards of Ukrainian politics that was triggered by the impeachment proceedings, it was only a matter of time before someone would point to the Ukrainization of U.S. politics.

On November 22, New York Times columnist Bret Stephens stepped up to the plate. As Stephens, a conservative, put it, U.S. leaders are:

“treating fictions as facts; and propaganda as journalism; and political opponents as criminals; and political offices as business ventures; and personal relatives as diplomatic representatives; and legal fixers as shadow cabinet members; and extortion as foreign policy; and toadyism as patriotism; and fellow citizens as ‘human scum’; and mortal enemies as long-lost friends — and then acting as if all this is perfectly normal.”

Stephens is right. What he is leaving out, however, is what can — what needs to — be done to rectify this bad situation.

Tantalizingly, here again a look at Ukraine provides an answer — and it is an inspiring one. What is needed in the United States today is what the Ukrainian people did in 2014. Exhausted from oppression, lies, corruption and Russian interference, the Ukrainian people rose and overthrew the ruling party and President during the so-called “Revolution of Dignity.”

The systemic and active involvement of the Republican Party establishment (especially, but not limited to its elected officials in Washington, D.C.) in Trump’s destruction of U.S. democracy demands such a nation-wide Revolution of Dignity here and now.

Most likely, in the U.S. case, the revolution would have to occur at the ballot box. That would imply that it must be led by the Democratic Party.

For that to happen, the Democrats must find a way to deal with the impeachment issue in a smart manner. Rather than trying to keep the nation focused on the issue for the next several months, Democrats should take the long view.

Putting impeachment on ice for now

If they don’t and keep obsessing about impeachment right now, they will step onto their own primaries, not least because several of the candidates would be tied up in the U.S. Senate for the impeachment proceedings.

To bring about the Revolution of Dignity, House Democrats should change their minds about not enforcing the subpoenas against Chief-of-Staff Mick Mulvaney, Secretary of State Mike Pompeo and Trump’s former National Security Advisor John Bolton in court.

Going for those subpoenas would undoubtedly take months. During the related court deliberations, impeachment would become a largely marginal issue in the country’s daily news. Instead, the focus would be on the race for the Democratic nomination. It would allow the Democrats to talk about the issues that matter to voters.

In the end, the odds are that the Democrats would likely succeed in the courts. The claim of executive privilege cannot shield the public officials from appearing before the U.S. Congress in impeachment proceedings.

In that event, maybe around May, these reluctant witnesses would have to testify before the U.S. House. They could very well plead the Fifth, or they might perjure themselves. One might even tell the truth, in which case removal of the President would be unavoidable.

All outcomes under this scenario would be bad news for Trump.

Rather than rushing things, Democrats ought to remind themselves that, in 1996, Susan McDougal was incarcerated for 18 months for contempt of court as she refused to answer three questions to a Grand Jury in Bill Clinton’s Whitewater investigation.

The key lesson from the Nixon case

Democrats also ought to remind themselves that Richard Nixon would never have resigned, if they had decided not to go to the courts at the time.

They were in this for the long haul. Nixon knew that he had to comply with court orders, release evidence and the case was closed leading to his resignation.

The Democrats also like to claim that the Republicans shamelessly put party before country. In reality, the Democrats do the very same thing. They calculate that a drawn-out impeachment process brought about by enforcing the rule of law might harm their electoral chances in November of next year.

The Democrats should rethink their strategy. Patience pays. The House impeachment hearings have accumulated evidence that, in normal political times, would not only lead to the impeachment of the President but — for the first time in U.S. history — to his removal.

What makes it all worse is that the active involvement of the most senior cabinet officers in this massive criminal scheme is unprecedented. They have recklessly and ruthlessly put at risk the United States’ national security and destroyed the credibility of the country’s voice promoting the rule of law globally, entirely for Donald Trump’s personal political gain.

Republicans and Democrats failing the U.S.

The values of America’s democracy are at grave risk at a time when Republicans in the U.S. Congress are the handmaiden of a deeply corrupt president. Unfortunately, the Democrats, staring senselessly at the poll numbers, are failing to rescue the Republic.

In such a convoluted environment, democratic (small “d”) voters in swing states might stay home, once again, while the Trumpists are likely to show up in full force guaranteeing the president’s reelection.

This time, Trump’s deficit in the popular vote may be 10 million people. Thanks to the machinations of the Electoral College, which massages the numbers away from the national vote count, U.S. democracy in the Trump era is fast becoming more synonymous with the tyranny of the minority than ever before.

For the religiously inclined, it is time to stop proclaiming “God bless America” and instead time to start begging “God help America”!