Trump stormed out of NATO summit after feuding with world leaders, who were seen laughing at him on video 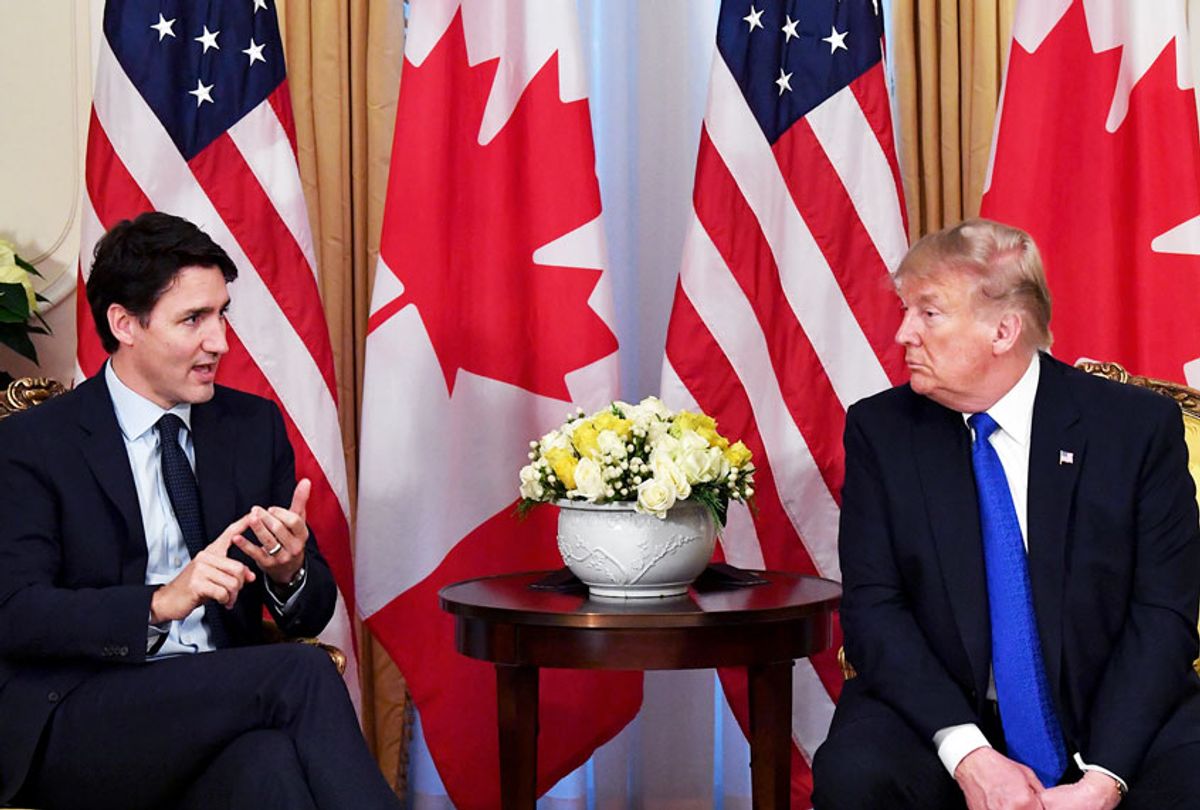 US President Donald Trump listens to Canada's Prime Minister Justin Trudeau during a meeting at Winfield House, London on December 3, 2019. - NATO leaders gather Tuesday for a summit to mark the alliance's 70th anniversary but with leaders feuding and name-calling over money and strategy, the mood is far from festive. (NICHOLAS KAMM/AFP via Getty Images)
--

President Donald Trump abruptly canceled his NATO press conference and lashed out at Canadian Prime Minister Justin Trudeau after a video appeared to show several world leaders mocking and laughing at him.

Another video appeared to show Queen Elizabeth scold Princess Anne for not greeting Trump with the other royals.

“Well, he’s two-faced,” Trump said. “And honestly, with Trudeau, he’s a nice guy, I find him to be a very nice guy. But the truth is I called him out on the fact that he’s not paying 2 percent, and I guess he’s not very happy about it,” he added, referring to Canada’s NATO contributions.

After lashing out at Trudeau, Trump announced that he would cancel his Wednesday press conference.

“I will be heading back to Washington,” he tweeted. “We won’t be doing a press conference at the close of NATO because we did so many over the past two days.”

“I think we’ve had plenty of questions,” he said during a meeting with German Chancellor Angela Merkel.

Trudeau said at a news conference on Wednesday that the impromptu press conference Trump held on Tuesday “was what I was sharing at the dinner.” He added that his “jaws dropped” comment was in reference to Trump’s announcement that the next G7 summit would be held at Camp David, after Trump initially wanted to hold it at his Doral golf resort.

Trudeau said he does not believe the video will affect his relationship with the president and said they had a good meeting.

Trudeau was not the only world leader Trump railed at during his trip to London. Trump also took offense to Macron’s comments that the world is “experiencing the brain death of NATO.”

Trump called Macron’s remark “very insulting,” “nasty” and “very disrespectful” on Tuesday. He added that the comment was also “very dangerous” because “nobody needs NATO more than France.”

Despite Trump’s praise for Boris Johnson, Politico reported that the British prime minister was "so keen not to be photographed with the US president that he did not even greet him at the door when he and wife Melania arrived.”

Attorney George Conway, the husband of senior Trump adviser Kellyanne Conway, tweeted that the video of leaders laughing at Trump further showed that he was “the laughing stock of the planet.”

New York Times reporter Maggie Haberman added that the video was sure to bother Trump because he “hates the thought of anyone laughing at him” and “for the fact that he long used ‘other countries are laughing at us’ as an attack against his predecessors.”

“It’s pretty clear when you watch it, it is obvious they’re talking about him,” MSNBC host Mika Brzezinski said on Wednesday morning. “They’re mocking him, and they have very little respect for him at all, if any.”

Co-host Joe Scarborough asserted that Trump lashing out at world leaders who criticized him played into the hands of Russian President Vladimir Putin.

“Once again, as Nancy Pelosi says, all roads lead back to Vladimir Putin,” Scarborough said. “In this case, Vladimir Putin could not be happier this morning watching Donald Trump once again fight with all of his NATO allies.”