Press Watch: Is Congress finally ready to strike back? After 18 years of submission, signs of life 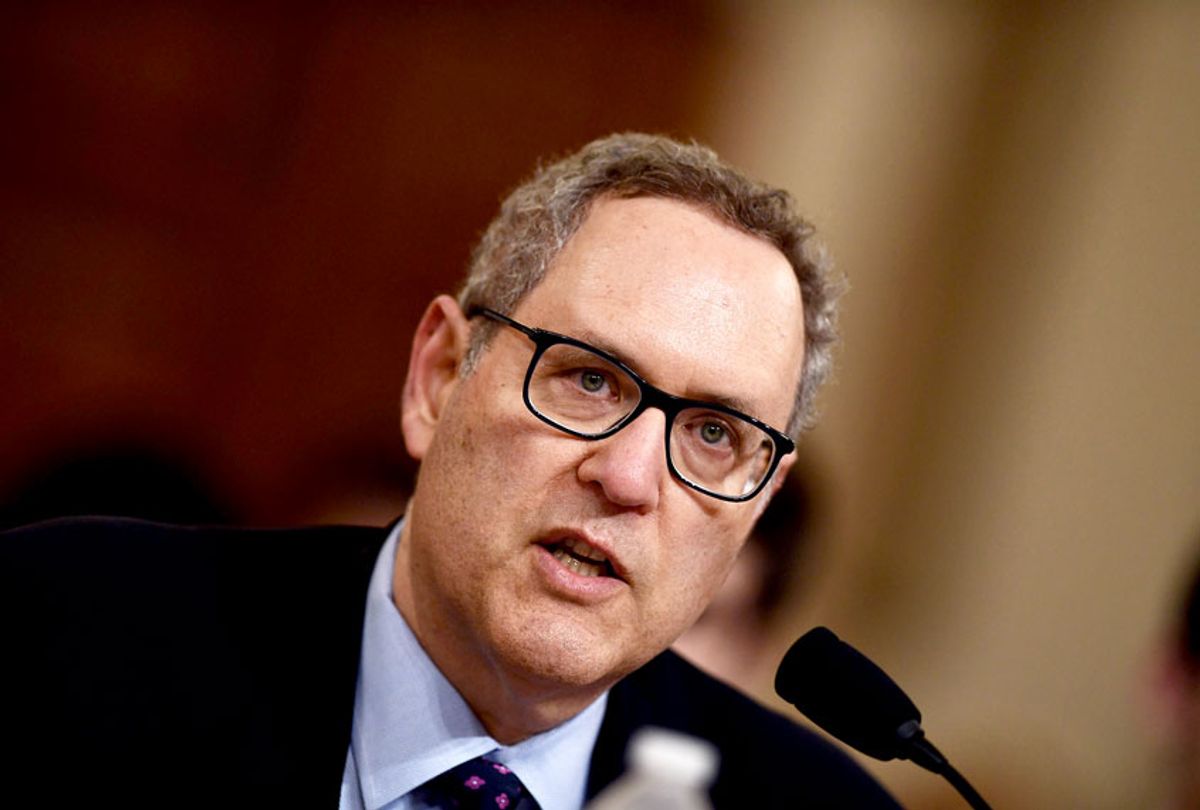 Prof. Michael Gerhardt speaks during a House Judiciary Committee hearing on the impeachment of US President Donald Trump on Capitol Hill in Washington, DC, December 4, 2019. - The next phase of impeachment begins December 4, 2019 in the US Congress as lawmakers weigh charges against Donald Trump, after the high-stakes inquiry into the president detailed "overwhelming" evidence of abuse of power and obstruction. Four constitutional scholars will testify before the House Judiciary Committee in the first of a series of hearings to establish the gravity of Trump's alleged crimes. (Photo by Brendan Smialowski / AFP) (Photo by (BRENDAN SMIALOWSKI/AFP via Getty Images)
--

House Democrats really have no choice.

As University of North Carolina law professor Michael Gerhardt testified at Wednesday’s Judiciary Committee hearing, “No member of this House should ever want his or her legacy to be having left unchecked a president’s assaults on our Constitution.”

He explained: “If Congress fails to impeach here, then the impeachment process has lost all meaning, and, along with that, our Constitution’s carefully crafted safeguards against the establishment of a king on American soil.”

Not clear enough? "I want to stress that if what we're talking about is not impeachable, then nothing is impeachable,” he said.

The other legal scholars testifying Wednesday focused more on the ample evidence of Trump’s abuses of power, but Gerhardt’s job was to expound on Congress’s obligation not to cede the powers expressly granted it by the Constitution as part of the “checks and balances designed to prevent any branch, including the presidency, from becoming tyrannical.”

Trump’s arguments “boil down to the assertion that he is above the law. The president himself has declared the Constitution gives him ‘the right to do whatever I want as president,’“ he said.

So if Trump is not impeached, the constitutional boundaries that limit a president’s power “will just evaporate. And those boundaries are set up by the Constitution and we may be witnessing, unfortunately, their erosion. And that is a danger to all of us."

There’s no possible historical justification for a failure to act, Gerhardt concluded:

The president’s serious misconduct, including bribery, soliciting a personal favor from a foreign leader in exchange for his exercise of power, and obstructing justice and Congress are worse than the misconduct of any prior president, including what previous presidents who faced impeachment have done or been accused of doing.

And there’s no option to punt, either: “If left unchecked, the president will likely continue his pattern of soliciting foreign interference on his behalf in the next election.”

So does that mean Congress is finally going to reassert itself, after 18 years of submission?

If so, this is a huge course change, and ought to be a big part of the media coverage, because ever since the 9/11 terror attacks, Congress has engaged in a wholesale ceding of power to the presidency.

At first it succumbed to a concerted assault by Vice President Cheney and his legal counsel, David Addington, who asserted a doctrine of unfettered executive power in wartime. Congress either averted its gaze or acceded to torture, mass domestic surveillance and many other trappings of what became known as the imperial presidency.

President Barack Obama publicly distanced himself from some of the Bush-Cheney executive power overreaches, but Congress stood by silently as he institutionalized most of them. He denied Congress any say in his expansive use of drones and cyber-attacks. When Obama unilaterally expanded the military campaigns in Syria and Iraq, Yale Law School constitutional scholar Bruce Ackerman wrote that he was “betraying the Constitution he swore to uphold.”

Trump, meanwhile, has shattered so many of the previously-observed Constitutional, legal and behavioral limits to the presidency it’s hard to know where to start. He has made a mockery of Congress’s responsibility to conduct oversight. He blatantly violates the Constitution’s emoluments clause on a daily basis. He intimidates congressional witnesses on Twitter.

His declaration of a national emergency to fund a wall along the southwestern border and his refusal to end American military involvement in Saudi Arabia’s brutal attacks in Yemen actually sparked two small bipartisan congressional rebellions earlier this year — but they were both easily quashed by a presidential veto.

Until now, there have been no consequences for Trump’s flouting of Congress.

Now, finally, and faced with no real alternative, House Democrats are poised to impose some.

Our savvy, elite political reporters will inevitably cast this as a partisan brawl, or a risky move for Democrats.

But at heart, it’s a reassertion of Congress’ constitutional role in the checks and balances that the framers designed to prevent tyranny.