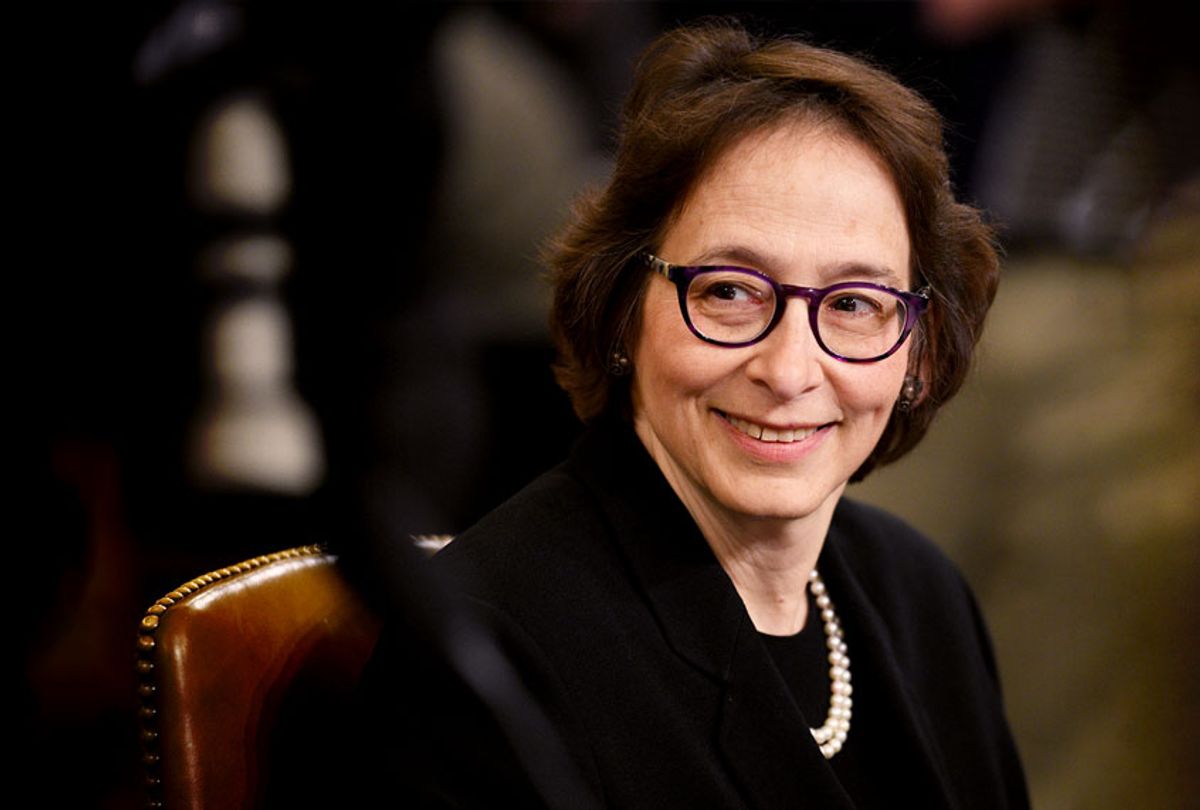 As soon as Pamela Karlan, a constitutional law professor at Stanford who specializes in voting rights, opened her mouth during Wednesday's impeachment hearing before the House Judiciary Committee, I knew she would become the prime if not exclusive focus of the entire right-wing response to the hearing.

Republicans were desperate to do anything to keep voters from paying attention to the actual substance of the testimony from the three law professors summoned to explain why Donald Trump should be impeached for his crimes, since the substance of their testimony is irrefutable. And while all three were articulate, intelligent and crystal clear in their arguments, only Karlan was female.

Her gender alone guaranteed she would take the lion's share of the abuse from Trump's defenders and base, who are as sexist as they are racist. But once she started talking, it was also clear that Karlan was sharp as a needle, confident, possessed of a biting wit and entirely unapologetic about those things — qualities that reliably drive Trump supporters into a witch-burning level of misogynist frenzy.

Sure enough, my suspicions proved correct and Karlan, who once celebrated her space in a community of "snarky, bisexual, Jewish women," was offered up by Republicans and the right-wing media as the object of the current Two Minute Hate, a focal point for Republican voters to obsess over, rather than actually considering the facts and arguments presented at the hearing.

Unsurprisingly, the go-to move on the prime-time Fox News shows Wednesday night was to "diagnose" Karlan with a mental illness. Calling women "crazy" in order to avoid listening to them speak truth has been the primary tactic of woman-haters since time immemorial.

"This lady needs a shrink," sneered Tucker Carlson on his nightly Fox News show, adding, "What a moron."

"Imagine carrying around that much hatred, that much resentment and anger every day of your life. Pretty sad, pretty pathetic," Sean Hannity echoed, sounding like every other troll I have to block on Twitter on a daily basis.

"House Democrats, they look really, really stupid," he continued, adding a concern-troll flair and describing Karlan as a "psychotic individual."

As I noted in my analysis of Wednesday's hearing, being angry about Trump is far from a sign of irrationality. On the contrary, the only rational, decent reaction to what Trump is doing to this country is anger. But, of course, calling women "crazy" is rarely, if ever, uttered sincerely. If anything, the saner the words coming out of a woman's mouth, the likelier she is to be dismissed as nuts.

Rush Limbaugh, of course, did more of the same, saying Karlan is a "babe who is making up stories" and that she's been "poisoned with abject hatred."

Limbaugh also made sure to quote the "snarky, bisexual, Jewish women" line from Karlan's 2006 speech, just in case his slower listeners were unaware that she has been singled out as a hate object for her identity. The site also photoshopped one of those pink pussy-hats on Karlan's head, lest there be any remaining doubt that she was hated for being a disobedient woman.

There were, it must be noted, two other law professors who were summoned before  the committee and who agreed with Karlan's analysis: Noah Feldman of Harvard and Michael Gerhardt of the University of North Carolina. Both men made sharp, unapologetic arguments that Trump should be impeached, explicitly saying, "President Trump has committed impeachable high crimes and misdemeanors" (Feldman) and "If what we’re talking about is not impeachable, nothing is impeachable" (Gerhardt).

But both men were ignored by the right-wing hate machine. As of Thursday morning, there were multiple stories about Karlan on the front pages of Fox News and Breitbart, all featuring photos of her looking angry, and not a single story about either of the two men who testified alongside her. There were even fewer stories about Jonathan Turley, the George Washington University professor brought in by Republicans to make a rather feeble case against impeachment.

The main excuse for ginning up outrage against Karlan was that she made a joke about what Trump had named his youngest son during the hearing — and actually a pretty good joke, as far as these things go.

"The Constitution says there can be no titles of nobility, so while the President can name his son Barron, he can't make him a baron," Karlan cracked, in response to a question about the differences between kings and presidents.

This became the pretext for what might qualify — in a heavily competitive contest — for the lamest bad-faith offense-taking by right-wingers in recent memory. Multiple White House officials, including Melania Trump, feigned anger over Barron Trump's "privacy" being violated by the public acknowledgment of his existence and his name. (Whatever idiotic claims have been made to the contrary, Barron's name was public knowledge long before this.

Multiple right-wing personalities — most of whom support putting immigrant children in cages, depriving children of food because they have low-income parents and making false accusations against teenagers who speak out about global warming and gun violence —  escalated, absurdly suggesting this joke was an "attack" on an innocent child.

Obviously, no one actually thought Karlan was "attacking" or "mocking" Barron Trump. The target of the joke was clearly the father who named him. The only person who has done harm to this child is his father, by giving him a tacky and pretentious name.

Nah, the real reason conservatives are mad is Karlan landed a sick burn on Trump. Nothing sets misogynists off faster than a woman laughing at a man who deserves it. That's why the right's claims about Karlan were as out of touch with reality as 16th-century peasants yelling that the elderly widow had curdled the cow's milk with curses.

But the narrative that a smart, professional woman somehow hates children is, of course, catnip to misogynists. This, along with accusations of witchcraft (which are probably coming soon enough) is the oldest and most consistent of slurs against women who dare to defy patriarchal demands of subservience, silence and compulsory heterosexuality: They are a threat to children.

This is also what fuels the anti-choice movement, of course: Hatred of women that is concealed by, and rationalized with, feigned concern over the fate of "babies." Those were also the arguments used against women's right to vote, divorce, hold jobs or do pretty much anything that gives them power and agency in the world: Somehow, this will harm children.

It's a lie, of course, and one exposed by the fact that the people who wield "child-hater" and "baby-killer" accusations are also the ones who consistently support policies that leave actual children in poverty and distress. But reactionaries love hiding behind fake concern for children rather than admitting what really worries them, which is that strong, independent women pose a threat to men's unchecked power.

Republican politicians and pundits are fully aware why this attack on Karlan is so potent. It's about taking the anxiety some men feel about women who reject them romantically or get promoted over them at work, and equating that anxiety with Trump's anxiety over being impeached for committing crimes. Never mind that those two things are completely separate concerns — although both are equally invalid.

Unfortunately, this is likely to work as intended: By appealing straight for the lizard-brain hatred of smart, independent women on the right, Republican politicians and pundits will be able to bamboozle their base into doing what most already want to do, which is to think about anything besides the fact that their beloved president committed crimes and is trying to get away with it. Misogyny is a blunt instrument. But all too often it's an effective one.