Amazon abuses workers and the climate because it can 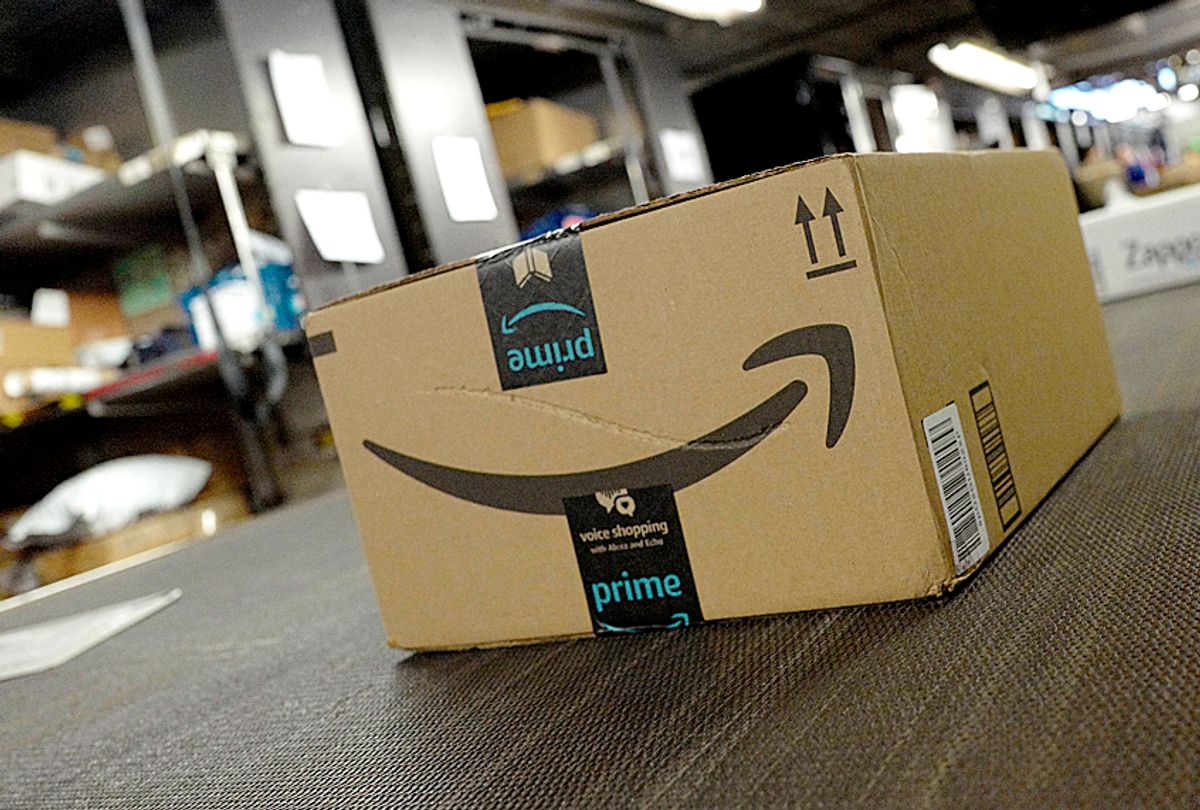 While online shoppers were busy taking advantage of bargain prices on Black Friday, retail workers in various European cities were walking off their jobs in anger. Hundreds of Amazon workers in six German cities protested, saying that their employer’s demands were making them ill. Similar protests were held by Amazon workers in France, aimed at the environmental cost of Black Friday, and in the U.K., members of the union GMB held signs saying pointedly, “We are not robots.” Here in the U.S., workers picked up on that theme as dozens gathered outside Amazon founder and CEO Jeff Bezos’ Manhattan apartment to insist that they are “human beings, not robots.”

A majority of American households are members of Amazon Prime. All we see with our eyes is the website that we make purchases on and the boxes that arrive on our doorstep a day or two later. Sometimes we may catch a glimpse of a delivery person rushing away to their truck to drop off the next package. But the worker protests that have plagued the company ought to deeply trouble us, as well as documented abuses in numerous recent studies and investigative reports.

As millions of Americans this holiday season have been doing, I too have been relying on the convenience of Amazon’s shopping experience to tick off the boxes on my list of gifts. In fact, I routinely count on it to meet the needs of my family. As a parent with a full-time job, I have barely 20 minutes of free time during the day to run errands, buy groceries, drive my kids to their extracurricular activities, and so on. When I see heavy rain in the forecast and realize with dismay that my child has outgrown his rain boots, it is far easier to order him the right pair of boots on Amazon in minutes than spend more than an hour driving to and from a store that may or may not have the size and price I’m looking for.

Online shopping has been a boon, especially for working mothers like me. I will admit, I have often thought of my reliance on the convenient online shopping experience as “self-care,” to use the parlance of the modern wellness movement. But each click confirming a purchase comes with a heavy bout of guilt, knowing what I know about how the workers who fulfill my order are treated.

Earlier this year Amazon surpassed Walmart to become the world’s largest retailer. Like Walmart, Amazon has reached its heights by cutting labor costs to the bone and faces a plethora of accusations of underpaying workers and violating their rights. But Amazon has gone further than Walmart could ever dream of in its quest to squeeze workers, ruthlessly spying on and tracking them to ensure they spend every second of their work day in service of the corporation.

Most Amazon customers are blissfully unaware of the appalling conditions behind their online shopping experience. The company paints a rosy pictureof the warehouses where the bulk of work happens in translating orders into packages for delivery. According to Amazon, its warehouses are spaces where “magic” happens, where the temperature is always kept comfortable for workers, and where there are “orange robots balancing towers of goods twirling in what looks like a choreographed dance across shiny concrete floors, miles of conveyor belts and ramps carrying inventory across the building, and shipping labels practically flying onto boxes, blown by puffs of air.”

This fantasy has a dark underbelly, as a recent investigative report from The Atlantic and Reveal showed. Workers are under surveillance to ensure they do not waste even a single second and are often left injured so badly by the pace of the work that they can no longer find employment. Internal records obtained by reporters showed that Amazon’s worker injury rate is more than twice that of the industry average. The National Council for Occupational Safety and Health also placed Amazon on its “Dirty Dozen” list of most dangerous workplaces of 2019 citing grim statistics: “Six worker deaths in seven months; 13 deaths since 2013. Reports of a high incidence of suicide attempts; workers urinating in bottles and workers left without resources or income after on-the-job injuries.”

The company squeezes its workers so hard that they are forced to rely on public benefits in order to survive—an accusation that dogged Walmart for years when it was the nation’s top retailer. A new study by the Economic Roundtable focused on Amazon’s Southern California warehouses found that “For every $1 in wages paid by Amazon, warehouse workers receive an estimated $0.24 in public assistance benefits.” Additionally, “57 percent of Amazon warehouse workers live in housing that is overcrowded and substandard. There is direct and indirect evidence of significant homelessness among warehouse workers.”

Amazon relies on taxpayers subsidizing its workers’ livelihoods, but it also refuses to pay its fair share of taxes. A U.K.-based watchdog group called Fair Tax Mark claimed in a report last week that the so-called “big six” tech firms, all based in the U.S., are “aggressively avoiding” paying international taxes and that Amazon was the worst offender. Globally, the company paid only $3.4 billion in taxes over the past ten years. Microsoft paid nearly $47 billion during this same time period, despite the fact that Amazon’s profits were $80 billion more than Microsoft’s.

It’s not just that workers are mistreated and government treasuries fleeced, but also the fact that the impact of Amazon’s business model on the environment has been serious. With climate catastrophes unfolding around the world, our thirst for easily available products translates into a huge amount of transportation of packages to and from factories, warehouses and customer homes, and an immense amount of packaging material that is expended each year. Thousands of Amazon’s employees recently signed a letter addressed to the CEO, demanding he draw up a plan for the company to lessen its impact on the climate. When Mr. Bezos released a climate plan in response, critics pointed out that it was full of “gaping holes.”

Clearly something needs to be done. It is not enough for individuals to declare that they are canceling their Amazon Prime memberships. There is no formal boycott in place, and Amazon’s aggressively seductive business model will ensure that it keeps growing. The company pushes its workers to injuries, pays them so poorly and hurts our environment because it can — not because it must.

Workers are best protected when they have collective power, and that can only come through a union. Amazon has aggressively engaged in anti-union tactics in a country that has deliberately weakened labor laws and undermined the rights of workers to unionize.

Our climate is best protected when there are strict laws in place to regulate emissions and force companies to manage their environmental footprint. Yet year after year, even with climate catastrophe looming all around us, our federal government has only encouraged greater carbon emissions. So Amazon continues to offer free shipping on low-cost disposable items that have an outsize impact on the climate, not because it must, but because it can.

Our tax revenues are best protected and expanded when strict tax laws are in place to ensure companies and the wealthy pay their fair share. But corporate lobbyists and compliant lawmakers have chipped away so badly at our tax code that it has been entirely rewritten to favor the likes of Amazon. So why should Amazon not take advantage of what our laws enable?

Far more effective than individuals walking away from the company (although that doesn’t hurt), is collective action to change the laws that Amazon benefits from. Yesterday it was Walmart, today it is Amazon. And tomorrow it may be another company that earns the notoriety that comes with ruthless corporate behavior. Our system is designed to allow Amazon to flourish at the expense of workers and the environment. We have to change the system.