Michael Bloomberg disses 2020 Democratic rivals: "Trump would eat them up"

"I think that I would do the best job of competing with him and beating him," Bloomberg said of Trump 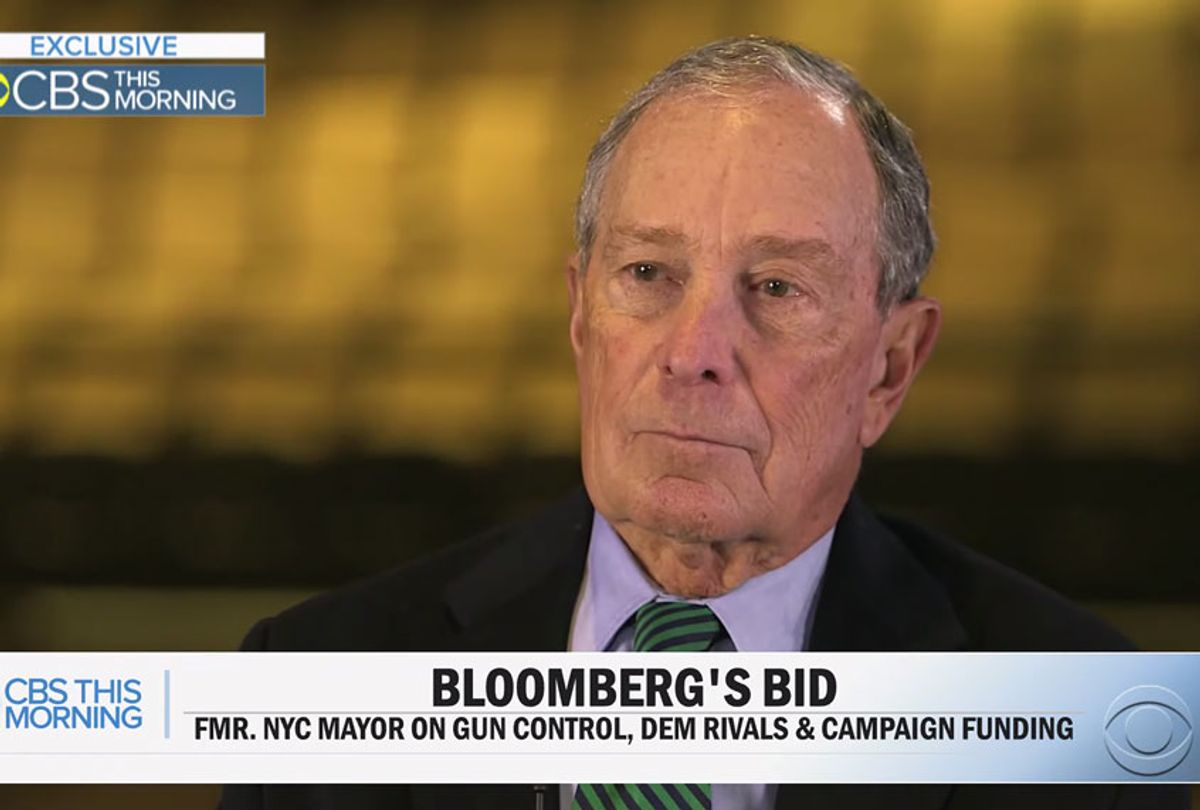 Michael Bloomberg said in an interview that aired Friday that he believed President Donald Trump would trounce any other Democratic presidential candidate in a head-to-head match-up.

In an interview with Gayle King on "CBS This Morning," Bloomberg sought to explain his last-minute entry into the 2020 presidential race.

"I looked at our national government getting worse. The way we were behaving overseas and domestically, led by our president," Bloomberg told King. "I said back in 2016 [Trump] is the wrong person for the job. He doesn't have the temperament, the ethics or the intellect to do the job."

"I watched, and I said, 'We just can't have another four years of this,'" he continued. "Then I watched all of the candidates, and I just thought to myself, 'Donald Trump would eat them up.'"

Bloomberg later hedged on the statement, saying he believed that he is the candidate best positioned to deny Trump a second term in 2020.

"Let me rephrase it," he said. "I think that I would do the best job of competing with him and beating him."

Bloomberg announced his presidential bid last month with the strategy of focusing on Super Tuesday states like California and Texas instead of the early nominating states of Iowa, New Hampshire, Nevada and South Carolina.

Though he joined the race just days before Thanksgiving, his entry has already drawn scrutiny from his opponents, in large part due to his early access to campaign cash. Since jumping into the presidential contest, Bloomberg has reportedly spent more than $57 million on TV ads, putting him on track to overtake Tom Steyer, the other billionaire in the race, who has spent roughly $60 million on ads since throwing his hat in the ring in July.

"When I watched TV last night, all I saw were two billionaires' ads," Sen. Amy Klobuchar, D-Minn., said earlier this week. "The rest of us can't afford to run ads like that. You just can’t simply allow wealthy people to come in and buy elections. I don't think America looks at the guy in the White House and says, 'Let's find someone richer.'"

Sen. Cory Booker, D-N.J., lamented the lack of diversity in the primary field, noting that after Sen. Kamala Harris, D-Calif., was forced to suspend her campaign due to lack of funding.

"There's more billionaires in the 2020 race than there are black people," he said.