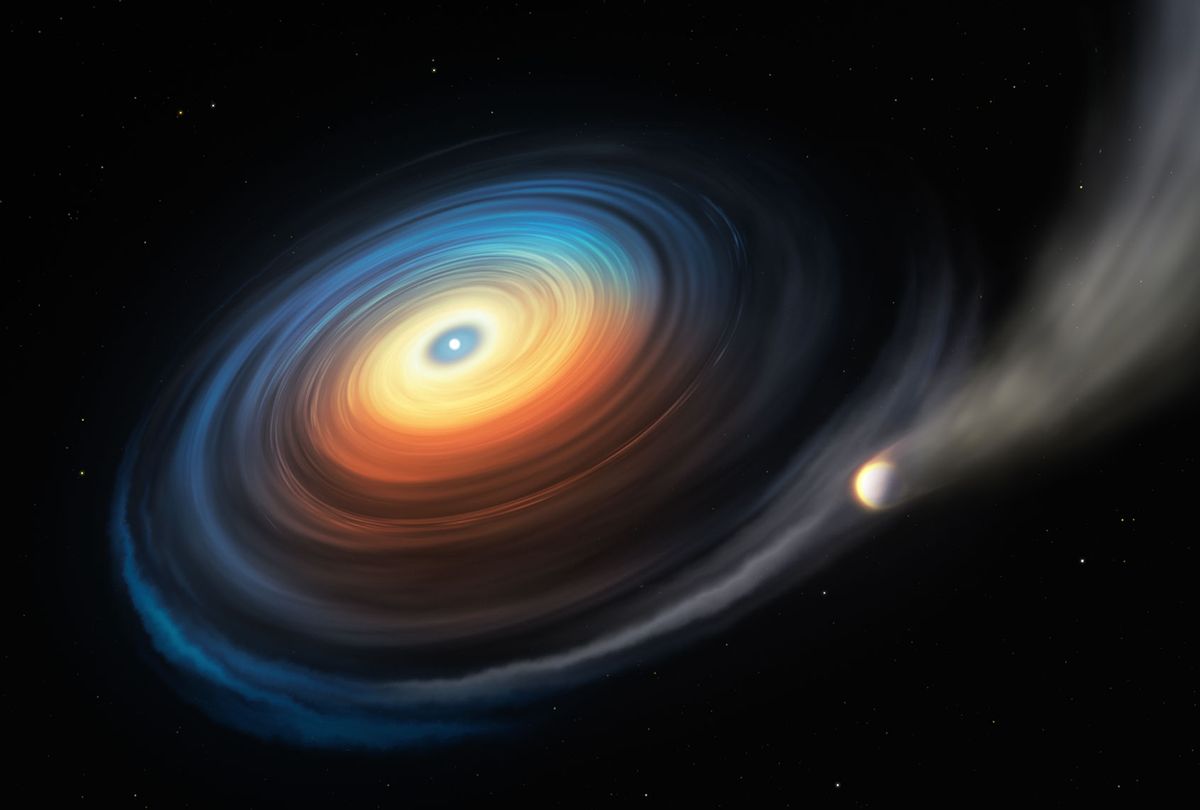 This illustration shows the white dwarf WDJ0914+1914 and its Neptune-like exoplanet. Since the icy giant orbits the hot white dwarf at close range, the extreme ultraviolet radiation from the star strips away the planet’s atmosphere. While most of this stripped gas escapes, some of it swirls into a disc, itself accreting onto the white dwarf. (ESO/M. Kornmesser)
--

As human telescopes have improved, scientists have been blessed by the discovery of an incredible variety of unusual exoplanets that give insight into the past and future of our universe.  Now, a new discovery of an evaporating exoplanet in orbit around a white dwarf hints at what our own solar system will look like in billions of years, after our sun has exhausted its supply of hydrogen, and contracted down into a small, hot, compact white dwarf.

Astronomers published a new study in Nature regarding a new icy exoplanet they have discovered that is continuously evaporating while it orbits its parent white dwarf star. According to the researchers, this is the first time that scientists have observed a planet orbiting a white dwarf.

Our sun is categorized as a yellow dwarf star, and is still in the early phase of its life, generating excess energy by fusing hydrogen into helium. In about 5 billion years, the sun will run out of its supply of hydrogen, and, being too cool to fuse higher elements, will cease thermonuclear fusion. At that point, the sun will expand, transform into a red giant, growing hundreds of times larger and engulfing nearby planets, like Mercury, Venus and perhaps Earth. In this process, stars like the sun shed their outer gaseous layer, leaving only a hot, compact burnt-out core, known as a white dwarf. White dwarfs generate no energy of their own, but have enough leftover heat that they continue to radiate for trillions of year before cooling to a black dwarf — though the process of cooling takes so long that it is not believed that there are any black dwarfs in the universe currently.

“It was one of those chance discoveries,” researcher Boris Gänsicke, from the University of Warwick in the United Kingdom, who led the study, said in a media release.

Gänsicke and his team looked at 7,000 white dwarfs that were observed by the Sloan Digital Sky Survey. Out of 7,000, they found one unique one that had traces of chemicals in amounts they had never observed before.

“We knew that there had to be something exceptional going on in this system, and speculated that it may be related to some type of planetary remnant,” Gänsicke said.

Follow-up observations confirmed the presence of hydrogen, oxygen and sulphur. They discovered that these elements were present in a disc of gas swirling into the white dwarf — but they weren’t coming from the white dwarf.

“It took a few weeks of very hard thinking to figure out that the only way to make such a disc is the evaporation of a giant planet,” Matthias Schreiber from the University of Valparaiso in Chile said in a media release.

Similar amounts of these elements have been found in the deep atmospheric layers of Neptune and Uranus, which are both large gas planets. Researchers believe that when such a planet orbits close to a white dwarf,  its atmosphere can be stripped away by the extreme ultraviolet radiation from its parent star. This type of shedding would then swirl into an accretion disc around the star.

The research provides insight into how planets, such as those in our own solar system, will transform throughout our sun's inevitable transition to a white dwarf. Researchers believe that once the host star became a white dwarf, the planet moved closer to it. It is also possible that more than one planet survived the transition; indeed, the exoplanet’s odd, close orbit could be the result of gravitational interactions with other planets.

“Until recently, very few astronomers paused to ponder the fate of planets orbiting dying stars,” Gänsicke said. ”This discovery of a planet orbiting closely around a burnt-out stellar core forcefully demonstrates that the Universe is time and again challenging our minds to step beyond our established ideas.”

Lisa Kaltenegger, director of Cornell University’s Carl Sagan Institute and who was not involved in the study, said in a media statement: “These results are intriguing because they suggest that white dwarfs could host second generation planets.”

“Our work on white dwarfs as host stars to potentially habitable planets, led by my PhD student Thea Kozakis, shows that such planets — if they exist — could maintain habitable conditions for billions of years,” Kaltenegger said. “I hope they will find real planets orbiting white dwarfs next.”