House Intelligence report on Trump is scathing — but who cares? The election is what matters

Impeachment is inevitable, but you know he'll escape. For the Democrats to beat Trump next year, they need clarity 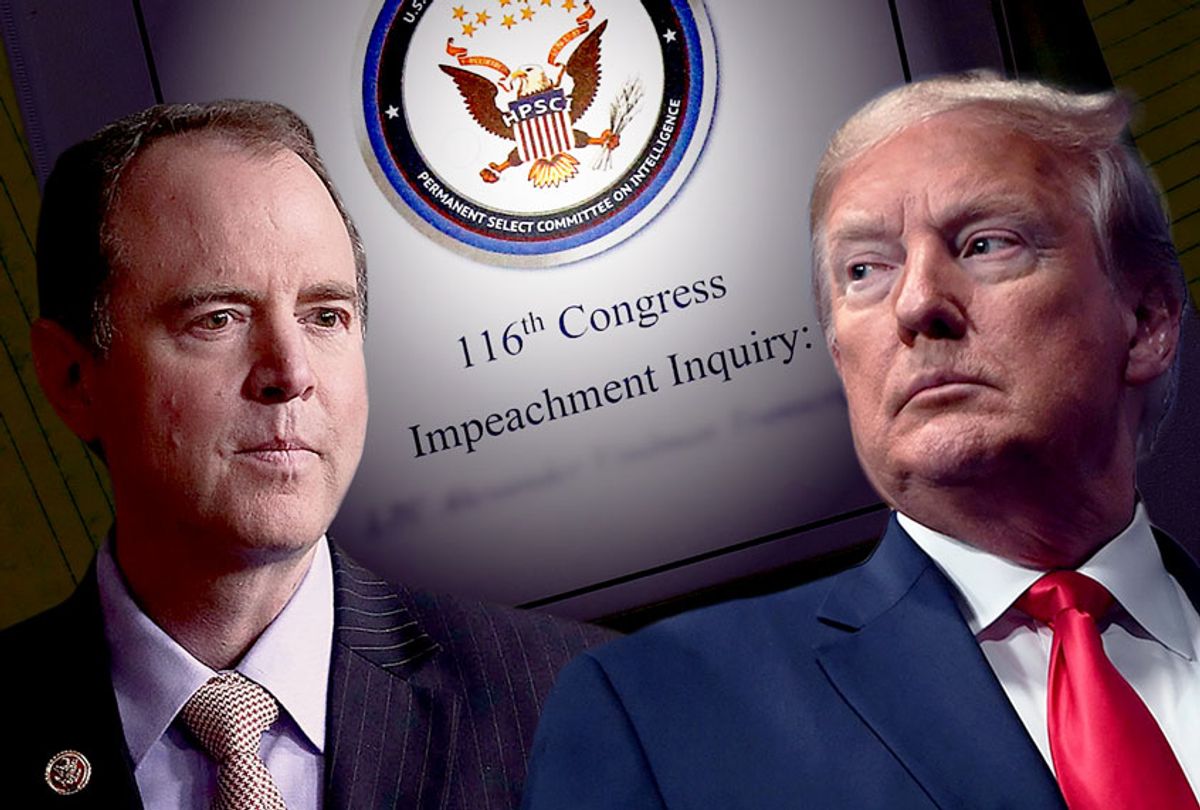 On Wednesday of last week, the House Intelligence Committee issued its impeachment report on President Trump. The facts are clear. Trump has engaged in obstruction of justice, abuse of power and other high crimes and misdemeanors in his effort to extort or bribe the government of Ukraine into aiding him in the 2020 presidential election. Donald Trump also usurped the power of Congress to allocate public money in the form of military aid to Ukraine. Trump has also repeatedly invited foreign countries to interfere in America’s elections on his behalf.

In the preface of the impeachment report, Intelligence Committee Chairman Adam Schiff summarizes the findings: “The evidence of the President's misconduct is overwhelming, and so too is the evidence of his obstruction of Congress. Indeed, it would be hard to imagine a stronger or more complete case of obstruction than that demonstrated by the President since the inquiry began."

But the damage to our system of checks and balances, and to the balance of power within our three branches of government, will be long-lasting and potentially irrevocable if the President’s ability to stonewall Congress goes unchecked.  Any future President will feel empowered to resist an investigation into their own wrongdoing, malfeasance, or corruption, and the result will be a nation at far greater risk of all three.

What should happen? Donald Trump should be impeached, convicted, and then removed from office.

What will happen? Donald Trump will be impeached by the House, but his Republican loyalists will not convict him in the Senate. Trump will claim he is a victim and his voters will rally around him. Russia may well interfere again, and Trump will likely win another term in 2020. His fascist authoritarian assault on America will continue.

Alas, the House Intelligence Committee impeachment report is truth without revelation. Thus the questions: So what? And who cares?

In many ways, a person is what they do. In his five decades of public life, Donald Trump has shown himself to be corrupt, criminal, racist, boorish, ignorant, misogynist, greedy and, increasingly, mentally unwell. The presidency has only amplified all Trump’s defects and provided him the opportunity to be an authoritarian leader, an American Ozymandias in service to Vladimir Putin.

Like Robert Mueller's report a few months ago, the House impeachment report offers another damning public accounting of Trump’s vile character and ignoble behavior. This is no surprise.

Meanwhile, the lack of unified mass public outrage is another example of the normalization of deviance in America.

America, again, has shown itself to be not such an exceptional nation. The normalization of political deviance is a common trait in failing democracies around the world.

The impeachment inquiry into President Donald Trump has had little impact on public opinion. In late November, just like in October, 50% of Americans wanted to impeach and remove Trump from office in CNN/SSRS polling.

Most voters are locked into their impeachment positions. About 85% of voters in our October and November polls said they felt strongly that Trump should or shouldn't be impeached and removed. Only about 15% of voters didn't have a strong feeling about impeachment or had no opinion at all.

But this "persuadable group," the CNN analysis continues, is barely paying attention to the impeachment process, whereas among the 85% majority who "feel strongly about impeachment," about half are "paying very close attention." In other words, only people who have already made up their minds about Trump and impeachment are watching the proceedings attentively. Those people who haven't made up their minds also don't care.

An overwhelming majority of Republicans, and nearly all white evangelicals, will continue to support Trump no matter how many of his crimes are exposed. Trumpism is a political cult. Instead of being disgusted by Trump’s behavior, his supporters celebrate it. On a basic level, they wish that they could behave as badly as Donald Trump — and do so with impunity.

The vast majority of Democrats and other Americans of conscience see Trump as an existential threat to the United States and the world. These Americans still have a functioning moral compass and want to protect the country and its democracy from a fascist president and his movement.

The remaining voters are either distracted, exhausted, indifferent, ignorant of politics and current affairs or some combination thereof. These Americans likely don't believe that presidential politics has any meaning in their day-to-day lives.

The first group is lost. Trumpists cannot be rehabilitated. Democrats should ignore them and disregard any talk of how to win back the fabled “Obama to Trump” voters. Hillary Clinton was being kind when she labeled Trump’s supporters “a basket of deplorables.” As we move toward the end of the third year of Trump’s regime they have shown themselves to be something much worse.

The second group will vote against Donald Trump and for the Democratic nominee, whoever that may be. But in what numbers? And will there be enough of them to defeat Trump in the key battleground states he won narrowly in 2016?

The third group of low-information, lapsed voters and non-voters represent an intriguing possibility. In theory, they can be mobilized to support the Democratic Party. But how? Democrats must overcome inertia and present themselves as a clear alternative to the Republicans. In a democracy, a person's decision as to what party and candidate to support is often distilled to, "What have you done for me lately?" The Democrats need a strong and compelling answer to that question.

Ultimately, the Democratic Party and its 2020 nominee must be something more than anti-Trump.

Trump’s corruption and criminality, and his war against American democracy and the Constitution, will not be enough motivation for a sufficient number of voters to reject him at the polls. To force Trump from the White House and into a life of shame and ignominy, the Democrats must answer some fundamental questions.

What do they stand for? What vision of a better America do they propose and how will they make it real? Without that clarity of vision, there is little hope of victory.