Open source technology could be a boon to farmers 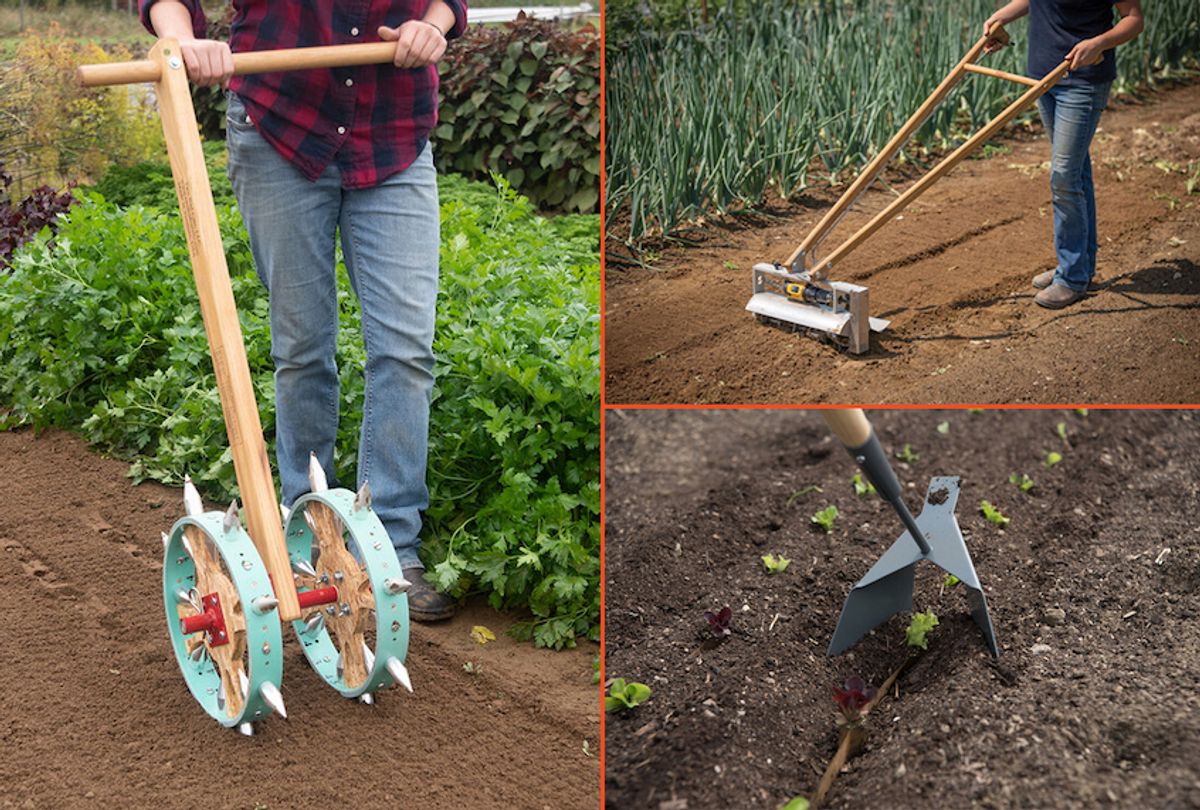 Clockwise from left: Some tools for open-source farming, including a double-rolling dibbler, a tilther, and a zipper. (Photos courtesy of Johnny’s Selected Seeds)
--

Robert Chang’s fellow small-scale farmers turn to each other when they need low-cost tech to stay organized as they plant dozens of varieties of vegetables each season and seek to consistently fill their community-supported agriculture (CSA) boxes each week.

Their collective solution? Pre-programmed, customizable spreadsheets that guide them through seed purchases and planting and harvesting schedules. The spreadsheets are free, hacked together, and open source, in a sense. But, Chang told Civil Eats, “it seemed pretty complicated to me, even though I’m an IT person.”

Chang, who started farming eight years ago and works full-time in information technology off-farm, searched for a different solution for his 14-acre organic vegetable and cut flower farm in northeastern Connecticut, finding software aimed at CSAs, which he doesn’t run, or marketing and sales, which he didn’t need. Then he discovered farmOS, a free, open source record-keeping software built on the web platform Drupal.

At a time when a dense field of ag-tech startups — 1,600 of them, by one estimate — are vying for market share and a number of venture capital firms now specialize in agriculture technology, finding alternatives is no small task. In 2018, tech startups along the entire agriculture and food supply chain securing nearly $17 billion in funding, with farm management and sensing startups alone attracting $945 million, according to AgFunder. The total investment haul was the highest amount ever — and 43 percent higher than the year before.

This abundance of tech can solve any problem a farmer may have, but the upfront costs and ongoing subscription fees can bring expenses through the roof.

Want to use satellite technology and other data to make decisions on irrigation and fertilizer application? Try Cropio, which costs 40 cents to $2 per acre per year. Seeking a business management solution to measure revenue and analyze field-by-field profits? Harvest Profit’s software runs $1,500 per year. (A consulting package that includes personalized calls twice per month goes for $10,000.)

Need a full-service solution that manages everything from worker punchcards to spraying events to RFID harvest tracking? Croptracker offers a per-service pricing plan that starts as low as $5 per user per month, but can easily run to hundreds of dollars per month for more comprehensive packages. Major names such as Granular, Conservis, Agworld, and others offer only custom quotes.

In the case of farmOS, on the other hand, Chang says, “Nobody is mining it or monetizing it in any way. It’s yours. You can export it in whatever way you want.” And it is infinitely customizable, if you’re tech savvy. “Since it’s open source, you can change the code, if you want to do your own customizations.”

FarmOS isn’t the only option for those seeking open-source alternatives, but it reflects the recent iteration of the open source farming movement, which emerged 15 years ago with a website on which farmers shared designs for hand tools and tractor implements. The scrappy movement has since evolved into an online community seeking to make the most advanced digital technologies of precision farming available to everyone, and not just Big Ag.

If it succeeds, the future of farming could be much more democratic. But it has a lot of catching up to do.

The open source software movement coalesced in the late 1990s, with programmers sharing software source code rather than sealing it off from users and forbidding its replication. The movement is known most famously, perhaps, for the Linux operating system, which was created by a disparate group of users connected only by the internet—a direct contrast to the sealed-in software worlds of tech titans like Microsoft and Apple.

Those using open source software in agriculture are up against similarly powerful companies. Farmers who scrap their cherished binders and spreadsheets full of records in favor of off-the-shelf farm management software often run the risk of losing control of their data to tech companies — or losing their data entirely.

Don Blair, a consultant who works with farmers setting up their own open source-based systems, knows farmers who have gone through just that. “They’ve experienced more than once that they’ve collected these records for years and the company goes out of business and there’s no way for them to get that data in a meaningful way,” Blair told Civil Eats.

To be sure, it takes longer for tech hobbyists and hacker farmers to collaborate on the development and maintenance of an open source program than it takes for a venture capital-backed team of a dozen developers working around the clock to spit out a shiny new app. Mike Stenta, who first created farmOS in 2014, concedes that much. 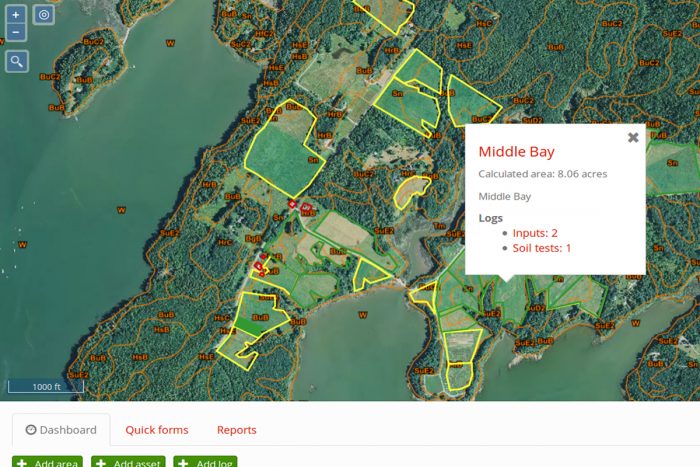 But, in exchange, farmers can remain independent.

“They are running the software themselves. They’re not dependent on another company, because companies come and go,” said Stenta, who apprenticed on organic vegetable farms in Washington state and Maine after college then started a CSA farm in Connecticut with a friend.

FarmOS users can host their data on an on-farm server, or pay for a hosting service from companies, such as Stenta’s own, Farmier. The company hosts a couple hundred farmers’ farmOS sites; an unknown number more host their own versions.

Anyone can contribute code to open source technologies like farmOS, and it’s that kind of knowledge sharing and community spirit that may help give small farmers a better chance of survival in the face of farm consolidation and climate change.

“The core technology is communication and collaboration,” said Dorn Cox, the research director at Wolfe’s Neck Center for Agriculture & the Environment, a leader in the open source farming movement. “The rest of it changes, but the ability to have those conversations and collaborations is most important.”

Developers are building additional farmOS modules — which will become open source — to help farmers organize additional activities such as animal movement through paddocks. Enterprising farmers can even hack together their own “smart farm” by connecting low-cost soil moisture sensors, greenhouse humidity monitors and other hardware to $35 Raspberry Pi computer kits that can feed the data into farmOS.

Stenta sees the potential for a rich marketplace of software products to provide additional features on top of the central farmOS databased — everything from data visualization to processing, recommendations. An application programming interface (API) enables other software to communicate with farmOS.

“If anything, farmOS allows for more competition and more innovation because the companies producing these solutions don’t have a monopoly on the farmer’s data itself,” Stenta said. “They have to work for their permission in order to keep access to the data. They have to prove they’re valuable. That’s different than if the farmer puts all their data in one platform. It’s going to be difficult for them to get out of that even if the company stops innovating.”

Farmers adopting open source technology are now partnering with scientists who extend that collaborative ethos to their research projects.

OpenTEAM, a project Wolfe’s Neck Center announced this summer, will help make the vast array of open source technologies more usable for farmers by gathering that tech into an ecosystem. Farmers will collect data on farm activities, soil chemistry and other variables — then scientists will analyze it to find solutions for soil health and climate change mitigation. The project will push research out of the carefully controlled conditions of research sites and onto real farming landscapes. And farmOS will play an integral role in organizing that data. 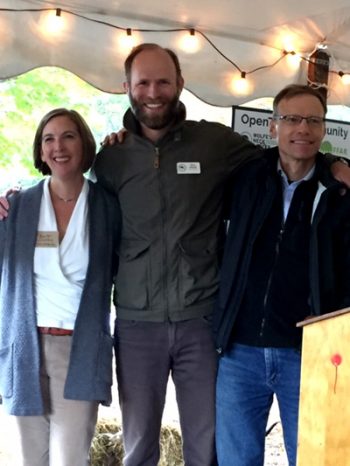 “We can’t just keep doing research trials and [field testing] and then try to apply that across the landscape. We need to be doing research in place and that means working with farmers,” said Dorn Cox, who is also a coordinator of OpenTEAM.

Cox has blazed his own technology trail since he first started expanding his parents’ organic New Hampshire homestead in 2003. In 2004, he helped launch Farm Hack, a website on which farmers could share designs for physical tools, such as a drip tape winder, poultry plucker, and no-till seed drill. But as farming itself grew more digitized, Cox’s focus shifted to open source digital tools. He rigged up environmental sensors and devices on his farm, connecting them over a wireless network.

By 2018, a group of tech-oriented farmers had coalesced within Farm Hack. That year, around 50 of them, including Cox, got together at the Omega Institute in upstate New York for the first Gathering for Open Ag Technology, where they shared ideas and discussed the future of open source farming.

“We have really terrific research tools in isolation, and that includes everything from field measurements to modeling and remote sensing,” Cox said. “We have a lot of work to do to put it into a form that’s useful.”

The ability to compete

The open source technologies will help small farmers compete against the large operations that are currently showered with an abundance of technology options. At conferences and expos, such as the National Farm Machinery Show in Kentucky, the Farm Progress Show in Iowa and Illinois, and the World Ag Expo in Tulare, California, farmers can eye advanced machines with wonder, and then drain their wallets to bring the equipment home.

“Going to the [ag-tech] events, you’re definitely wowed by the technology that’s available. There are drones and self-driving tractors and software systems that integrate massive amounts of data,” Evan Wiig of the Farmers Guild and Community Alliance with Family Farmers (CAFF) told Civil Eats. “But the vast majority of tools that are being promoted at these events is geared towards bigger farms.”

“We are moving into a very different age of technology in terms of online systems and online sales and the way consumers, both individual consumers and business distributors, are expected to do business,” Wiig said. “The days of keeping all your seeds in a shoebox under your bed and dealing in cash aren’t going to fly any more.”

Ryan Power, who grows 15 acres of certified organic vegetables and licensed cannabis in Sonoma County north of San Francisco, started farming with hand tools and horses a decade ago, but quickly upgraded to tractors, finger weeders, and power mulchers. Small farmers, he says, don’t need open source schematics to build their own hand tools, even though he has used a root washer based off a design from Farm Hack. Rather, small farmers need to use basic digital services to streamline management and track finances, such as Google forms and Slack to organize management and communicate with workers, and Quickbooks to manage accounting.

The innovation that would help Power the most would allow him to distribute his produce at a micro-regional level. Power has struggled to sell his vegetables to local grocery stores and restaurants in Sonoma County, where half a million people live, and he believes that halting the decline in small farms’ economic viability demands that technology seamlessly integrate those farms with distribution centers using trucks that never drive empty.

Even though farmOS doesn’t yet have the ability to connect Power with his buyers, it could. Since farmOS is an open source project, anyone can contribute and write additional abilities into the platform. Stenta, the farmOS creator, said that an ecommerce module could be built into the platform using Drupal Commerce, or farmOS data could be pushed to third party ecommerce platforms.

Collaboration may be a slow process, but Stenta believes it often has more staying power.

“It’s kind of like the tortoise and the hare. The slow and steady tends to build a more stable product that outlasts the flash-in-the-pan products,” Stenta said. “I was raised into this ethos that code is sort of like a snowball and it helps to all work on it together. Why would you create one little thing when you can all make one big thing?”