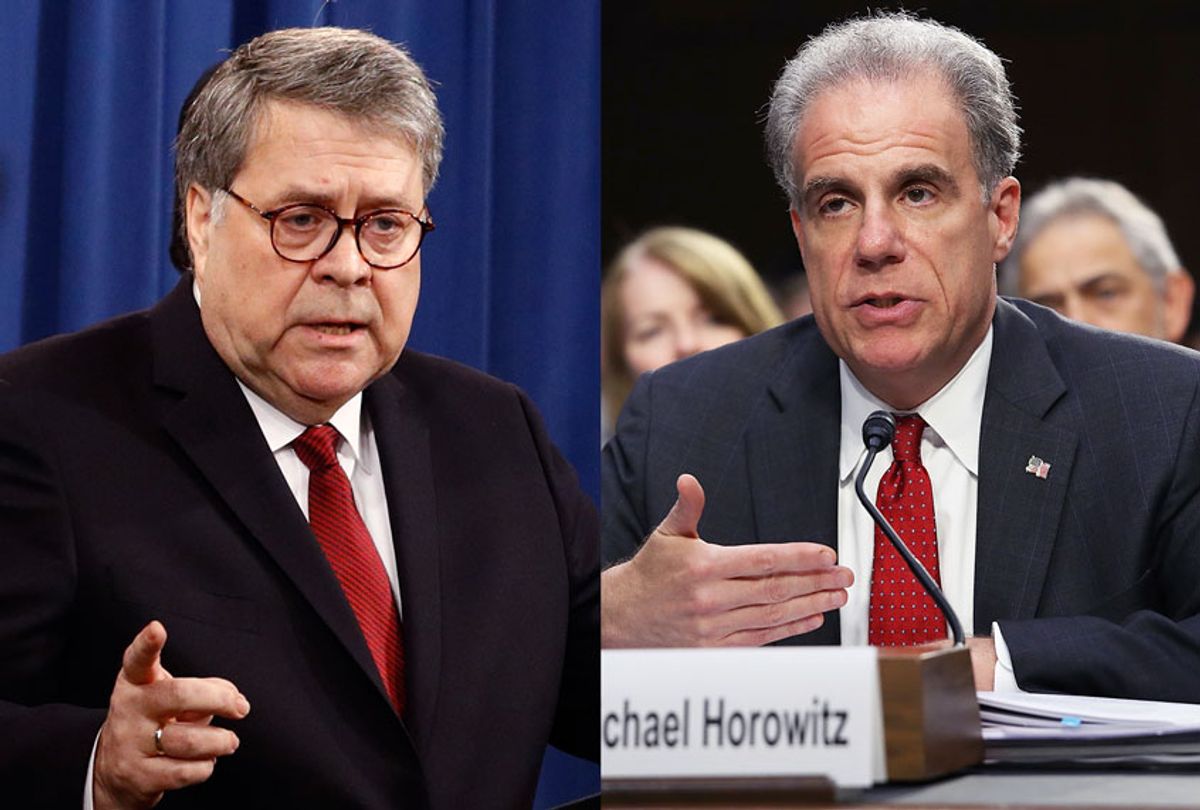 Attorney General Bill Barr has disputed his own department’s inspector general report that undercut many of President Trump’s claims about the FBI investigation into his campaign’s ties to Russia.

The 434-page report from Inspector General Michael Horowitz found some systematic issues with the FBI’s handling of the Russia probe but concluded that the bureau had an “authorized purpose” to start its investigation, which it code-named Crossfire Hurricane. The report refuted Trump’s claims that FBI leaders were motivated by partisan bias to open the probe and said the bureau did not illegally spy on Trump’s campaign. The report also disputed Trump’s claim that former FBI agent Peter Strzok and former FBI lawyer Lisa Page sought the probe out of anti-Trump bias.

Horowitz criticized the FBI’s handling of the Foreign Intelligence Surveillance Court applications to monitor Trump campaign adviser Carter Page, saying that the applications included “significant inaccuracies and omissions.” But the report also refuted Trump’s claim that the investigation was launched based on information gathered by former MI6 spy Christopher Steele, though it did reveal that Steele had a previously unreported friendly relationship with a Trump family member. That family member was identified as Ivanka Trump by ABC News.

Horowitz said the FBI team did not receive the information in Steele’s infamous dossier until after the probe began. The report also revealed that former Trump campaign chief Paul Manafort was already under investigation by the FBI when the Russia investigation was launched.

Sen. Richard Blumenthal, D-Conn., said the report “completely demolished” many of Trump’s and his allies’ claims about the probe. Fox News host Chris Wallace agreed that the report “didn’t find the things that Bill Barr and Donald Trump alleged.”

Perhaps not surprisingly, Trump ignored the many parts of the report that undercut his repeated claims about the probe to declare that the revelations in the report were “far worse than what I ever thought possible.”

“They fabricated evidence and they lied to the courts. This was an attempted overthrow and a lot of people were in on it, and they got caught,” he told reporters on Monday. “It’s a disgrace what’s happened with the things that were done to our country.”

Observers questioned why Trump’s statement was so at odds with the inspector general’s findings.

“Let’s be clear about what happened today,” he said. “For years and years, Donald Trump has said that the FBI and the ‘deep state’ was involved in an illegal conspiracy to bring down his campaign, that they relied on the Steele dossier to investigate and launch this investigation, and now after years of investigation, the inspector general said, ‘Not true — didn’t happen.’ This conspiracy theory that the president of the United States has been pushing was a total lie.”

Despite Horowitz's finding that the probe was justified, Barr claimed in a statement that the report showed that the “FBI launched an intrusive investigation of a U.S. presidential campaign based on the thinnest of suspicions, that, in my view, were insufficient to justify the steps taken.”

“It is also clear that, from its inception, the evidence produced by the investigation was consistently exculpatory,” Barr said. “Nevertheless, the investigation and surveillance was pushed forward for the duration of the campaign and deep into President Trump’s administration.”

FBI Director Christopher Wray had a very different response to the report.

“I think it's important that the Inspector General found that in this particular instance the investigation was opened with appropriate predication and authorization,” Wray told ABC News.

John Durham, the U.S. attorney tasked by Barr to investigate the origins of the Russia investigation, also issued a rare statement refuting the report.

“Our investigation has included developing information from other persons and entities, both in the U.S. and outside of the U.S.,” Durham said. “Based on the evidence collected to date, and while our investigation is ongoing, last month we advised the Inspector General that we do not agree with some of the report’s conclusions as to predication and how the FBI case was opened.”

“Under federal law, the DOJ Inspector General has formal authority to evaluate the work of US Attorneys,” he wrote. “So US Atty John Durham's new statement that he does ‘not agree’ with the IG Report cuts against the oversight rules — the IG *audits* the US Attorneys, not the other way around.”

“Why is he commenting on the incomplete findings of an ongoing investigation he is conducting?” added former DOJ spokesman Matthew Miller. “This is totally inappropriate and a sign of real rot setting in at DOJ. Shut up until you’re finished.”

Trump’s allies have increasingly sought to downplay the IG report, which they had hyped for nearly two years, while expressing optimism that Durham’s probe will confirm their claims about the probe.

"He's only looking at FISA abuse. All of that evidence needs to be sent to Durham,” Rep. Devin Nunes, R-Calif., the ranking Republican on the House Intelligence Committee, told Fox News. "That’s ultimately going to be the key … is, what does Durham find in looking at this entire debacle, which is targeting a political campaign by the FBI and the Department of Justice."

Democrats said that Trump’s defenders “will continue to prop up these conspiracy theories to deflect from the President’s misconduct.”

“Whether it’s the three years they spent embracing a baseless conspiracy or recent examples of promoting Putin’s false talking points, it’s sad how, in an effort to protect the president at all costs, the ‘Grand Old Party’ in the Senate is becoming the ‘conspiracy caucus,’” Schumer said in a statement.

Former FBI Director James Comey declared vindication in an op-ed for The Washington Post after the report was released.

“There was no illegal wiretapping, there were no informants inserted into the campaign, there was no ‘spying’ on the Trump campaign. Although it took two years, the truth is finally out,” he wrote, adding that it “unfortunately” appears that Barr “will continue his practice of deriding the Justice Department when the facts don’t agree with Trump’s fiction.”

“FYI: I offered to go on Fox & Friends to answer all questions. I can’t change their viewers on Donald Trump but hoped to give them some actual facts about the FBI,” Comey added on Twitter. “They booked me for tomorrow at 8 am. They just cancelled. Must have read the report.”