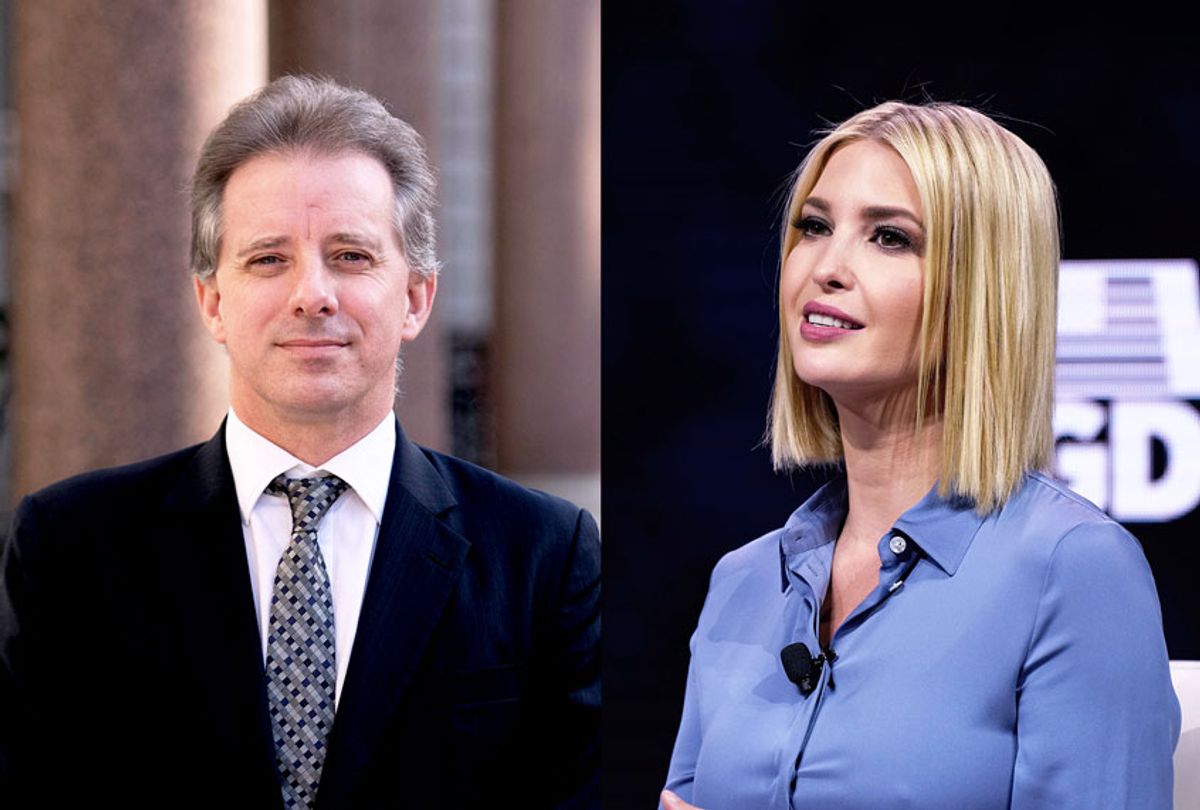 The anticipated report on the Russia investigation conducted by the Department of Justice's inspector general revealed that Christopher Steele, the author of the infamous Trump dossier, had a “friendly” relationship with one of President Donald Trump’s family members.

That family member was subsequently revealed as Ivanka Trump by ABC News, and the inspector general’s report said that Steele denied having a bias against then-candidate Donald Trump when he wrote the dossier.

"He stated that if anything he was 'favorably disposed' toward the Trump family before he began his research, because he had visited a Trump family member at Trump Tower and 'been friendly' with [the family member] for some years,” the report reads.

"He described their relationship as 'personal' and said that he once gifted a family tartan from Scotland to the family member,” the report continues.

While the report did identity the name of the Trump family member, ABC News reported that it was the president's eldest daughter. The network revealed its journalists had learned of the contacts between Steele and Ivanka Trump a year ago but only recently gained access to some of their conversations. Politico also confirmed that the family member in question was Ivanka Trump.

Ivanka Trump met Steele at a dinner in 2007 and “began corresponding about the possibility of future work together,” a source told ABC News. They later communicated to discuss a meeting near Trump Tower and stayed in touch for “several years,” according to the report.

The president's daughter and Steele discussed how his firm, Orbis Business Intelligence, could help the Trump Organization expand into foreign markets, according to ABC News.

Neither the Trump family nor Steele has ever publicly mentioned these exchanges. Trump has repeatedly attacked Steele as a “lowlife” and claimed that he was “tied into Crooked Hillary.”

Steele is a retired MI6 officer, who was hired by the opposition research firm Fusion GPS in 2016 to investigate Trump’s ties to Russia. Among the dossier's most shocking allegations was the claim that President Trump hired prostitutes on a visit to Russia and had them urinate on the bed of his hotel room before his career in politics.

President Trump has repeatedly claimed that the FBI relied on Steele’s “phony” dossier to launch the investigation into his campaign’s contacts with Russia, but the inspector general report concluded that its investigative team did not receive Steele’s information until after the probe had already been opened.

Though the inspector general’s report found some evidence of “inaccuracies and omissions” in the FBI’s handling of the investigation, the report undercut claims from Trump and his allies that the top FBI officials had a bias against the president that led to the opening of the probe.

“The FBI had an authorized purpose when it opened” the probe, the report said, “to obtain information about, or to protect against, a national security threat or federal crime, even though the investigation also had the potential to impact constitutionally protected activity."