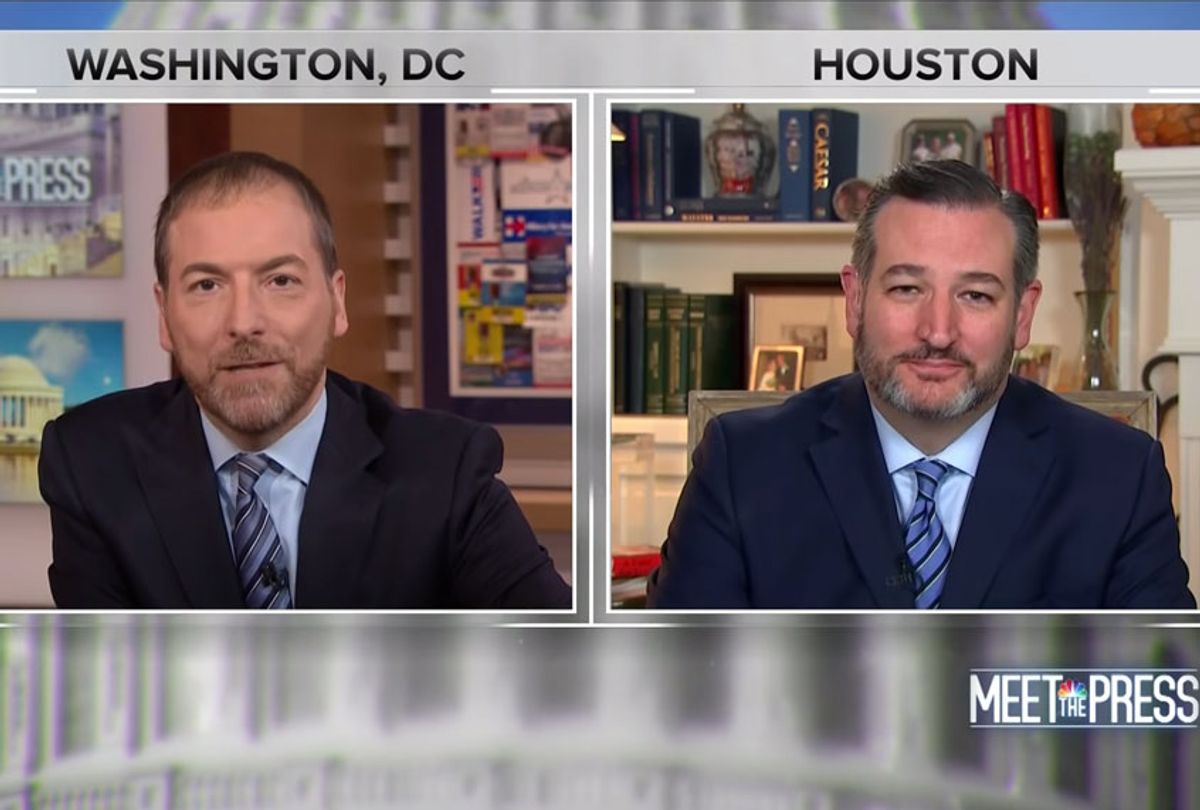 Sen. Ted Cruz, R-Tex., drew laughs from the NBC News studio after he pushed a debunked Ukraine conspiracy theory on Sunday’s edition of “Meet the Press.”

Host Chuck Todd got into a combative exchange with Cruz after he claimed that Ukraine interfered in the 2016 election despite a Republican-led Senate investigation which found no evidence of Ukrainian interference.

“Do you believe Ukraine meddled in the American election in 2016?” Todd asked.

“I do,” Cruz replied. "And I think there's considerable evidence of that."

“You do?” a bewildered Todd asked, prompting laughter from inside the Washington studio. (An NBC News source told Salon that the show has a small in-studio audience and that the laughs did not come from members of the NBC News crew or staff.)

“Senator, this sort of strikes me as odd, because you went through a primary campaign with this president. He launched a birtherism campaign against you,” Todd said. “He went after your faith. He threatened to 'spill the beans' about your wife about something. He pushed a National Enquirer story, which we now know he had a real relationship with the editors of the National Enquirer.”

“And Chuck, I appreciate you dragging up all that garbage,” Cruz complained.

“No, but senator, is it not possible that the president is capable of creating a false narrative about somebody in order to help him politically?” Todd asked.

“Except that's not what happened. The president released the transcript of the phone call. You can read what was said on the phone call,” Cruz said. “Chuck, let me point out a game that the media is playing. You know, a question that you've asked a number of people is — you've said to senators sort of aghast, ‘Do you believe that Ukraine — and not Russia — interfered in the election?’ Now, that — that in a court of law would be struck as a misleading question. Of course, Russia interfered in our election. Nobody looking at the evidence disputes that.”

“But the president of the United States does,” Todd pointed out.

“Do you know why he did that?” Todd asked. “What did Donald Trump — what did Donald Trump, as a candidate, say about Ukraine and Crimea during the election that might've inspired the ambassador?” Todd pressed, referring to Trump’s remarks about Crimea that alarmed Ukrainian officials.

“So you're saying they had disagreements with Donald Trump,” Cruz said. “And they wanted Hillary Clinton to get elected.”

After the interview, Cruz accused Todd of “deliberately LYING” on Twitter and doubled down on his claim that “there’s significant evidence” of his allegation against the media.

Top officials who reviewed the evidence told Congress that this is not true. David Hale, the No. 3 official at the State Department, told the Senate Foreign Relations Committee last week that he was not aware of any evidence of Ukrainian interference in the election.

Fiona Hill, the former top Russia expert on the National Security Council, told the House Intelligence Committee last month that “this is a fictional narrative that has been perpetrated and propagated by the Russian security services.”

Cruz’s GOP colleague Sen. Mitt Romney, R-Utah, agreed that there was “no evidence” that Ukraine interfered in the election. And fellow Sen. Marco Rubio, R-Fla., told Politico that it is “important to distinguish op-eds . . . from the systemic effort to undermine our election systems.”

“There’s no way to compare any other efforts to what Russia did in 2016,” Rubio said. “There’s nothing that compares not even in the same universe.”

Former Rep. Charlie Dent, R-Penn., told CNN on Sunday that he was stunned by Cruz’s remarks.

“I can’t explain it,” he said. “You would think a man like that would have more self-respect. After all the things President Trump said about him and his family, you would think he would be out there trying to speak truth to power at a time like this.”