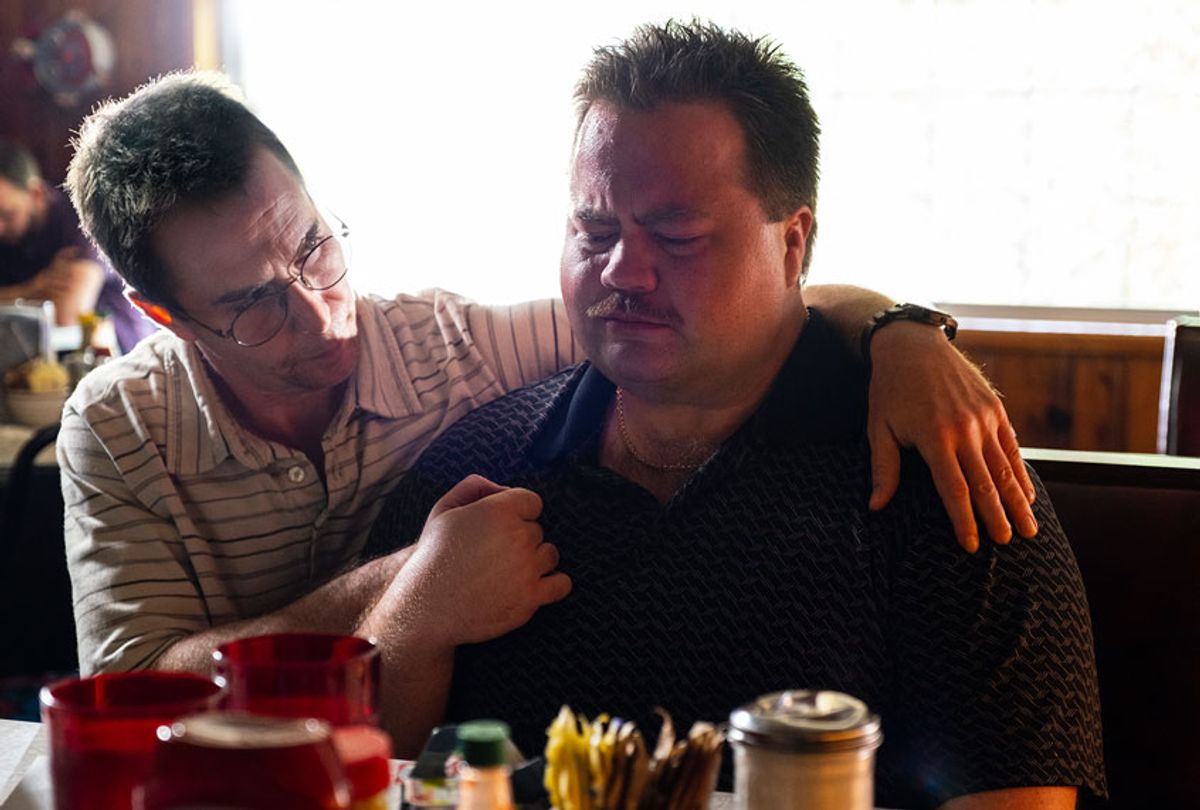 Clint Eastwood’s modest, efficient drama, “Richard Jewell,” wants to humanize, not sensationalize its title character — the security guard who became a prime suspect in the 1996 Centennial Park bombing in Atlanta during the Olympics. Eastwood does this by recounting the trials and tribulations Jewell experienced when he was investigated by the FBI and villainized in the media. (The film is based on the Vanity Fair article, “American Nightmare: The Ballad of Richard Jewell,” by Marie Brenner, as well as the book, “The Suspect,” by Kent Alexander and Kevin Salwen). Eastwood is squarely on Richard’s side at all times, and he wants audiences to be as well. The director seems to be making this redemption tale not just because it is an engrossing story, but because it reflects how decent American values, such as respect for others and authority, have been lost in this age of social media, and divisive politics.

The film introduces Richard Jewell (Paul Walter Hauser) as a humble supply room clerk who dreams of being in law enforcement and spends his Saturday nights studying penal codes. Richard is also adept at video games and target shooting. He lives with his mother, Bobi (Kathy Bates) and has respect for authority. At the office where Richard works, he befriends Watson Bryant (Sam Rockwell), a lawyer who appreciates Richard for anticipating his needs for tape and Snickers bars. (Watson nicknames him “Radar,” which is better than most of the names Richard is called because he is overweight). When Richard leaves the office to take another job, Watson talks with him about quid pro quo, and how “power can turn a person into a monster.” Those words resonate as power shifts dramatically against Richard Jewell.

After a bad experience working in a campus cop position for a local college — Richard apparently took his job too seriously and exercised liberties with his authority — he gets a detail doing security at Centennial Park, during the Olympic games. On the fateful night in question, he follows protocol and warns the police force that there is a suspicious package under a bench. It is, in fact, a bomb, and two people are killed and more than 100 people are injured by the explosion.

Richard, who was “in the right place, at the right time, and did the right thing,” becomes a hero. He is interviewed by Katie Couric and even gets an offer for a book deal. But soon the local FBI, led by agent Tom Shaw (Jon Hamm), is investigating Jewell because he fits the profile of a lone bomber. They suspect he was seeking attention and that he is a “false hero.” Shaw unwisely discloses this information to Kathy Scruggs (Olivia Wilde), an ambitious and seductive journalist from the Atlanta Journal Constitution. [Her character’s trading sex for information has also been called inaccurate by the AJC.] When the story publishes, Richard Jewell’s life turns upside down. (Here the film becomes reminiscent of “Absence of Malice,” Sydney Pollack’s crackerjack drama from 1981 about the FBI, a newspaper reporter, and an innocent man).

As the investigation into Richard snowballs — it could lead to his execution — the mild-mannered security guard tries to be cooperative. When he is tricked into being taken into the local FBI offices for a training video, he finds a reason to engage a lawyer and calls Watson for help. And it is here where “Richard Jewell” starts to crackle as a police procedural.

Watson’s righteous anger at both the media frenzy that develops and the invasive techniques (e.g., bugging) that puts his client under the spotlight is justified. And viewers will no doubt be angry too at watching Richard being railroaded. The FBI is looking for any reason to charge Richard and they collect everything they can from the apartment he shares with his mother — including, to Bobi’s dismay, her underwear and Tupperware — as well as his hair samples and palm prints. Moreover, Richard is almost happy to help them. His assistance may be his way of proving his innocence — as he believes when Shaw coerces him into recording the bomber’s call — but Richard refers to it as “professional consideration.” There are several moments where Richard talks to Shaw “cop to cop,” but Shaw is condescending in these exchanges.   When Watson scolds Jewell for being a doormat, Jewell counters by explaining why he admires Watson. Their exchange is an emotional moment, and Eastwood uses it to start tugging at heartstrings. The latter half of “Richard Jewell” is curiously sentimental in places, as when Richard comforts Bobi who is also under considerable pressure during the investigation, or a scene where Bobi makes an emotional speech at a press conference.

“Richard Jewell” is meant to show the importance of treating people with dignity and respect. At times the moralizing can feel overwrought. Eastwood has never been one for subtlety. A dream sequence used to show how Richard has been affected by all the attention to him feels a bit too on the nose. Likewise, a few scenes of Richard experiencing heart trouble, while based on fact, come across as manipulative.

The villains are one-note. Shaw’s relentless attack on Jewell seems to be his way of shifting blame for his own mistake. (Shaw was on duty at the park at the time of the bombing). Kathy Scruggs is depicted as ruthless in getting her scoop (even having her colleague co-write the story for her). A scene of her being showered with applause after her exclusive runs only sets her up for a spectacular comeuppance in the future. (Wilde is best being unfiltered).

As critical as the film is of the FBI and the media for their harassment of Richard Jewell, the ending provides only a modicum of satisfaction.

Eastwood does coax excellent performances from Sam Rockwell and Paul Walter Hauser. Rockwell infuses Watson with a real spark as his client gets deeper into trouble, and his passionate outbursts are fun to watch. In contrast, Hauser gives an empathetic performance. He allows Richard’s true nature and feelings of self-pity and self-worth to come across without feeling forced.

“Richard Jewell” is a decent portrait of an injustice, but it also feels oddly unexceptional and unnecessary.

The film will be released in theaters on Friday, Dec. 13.