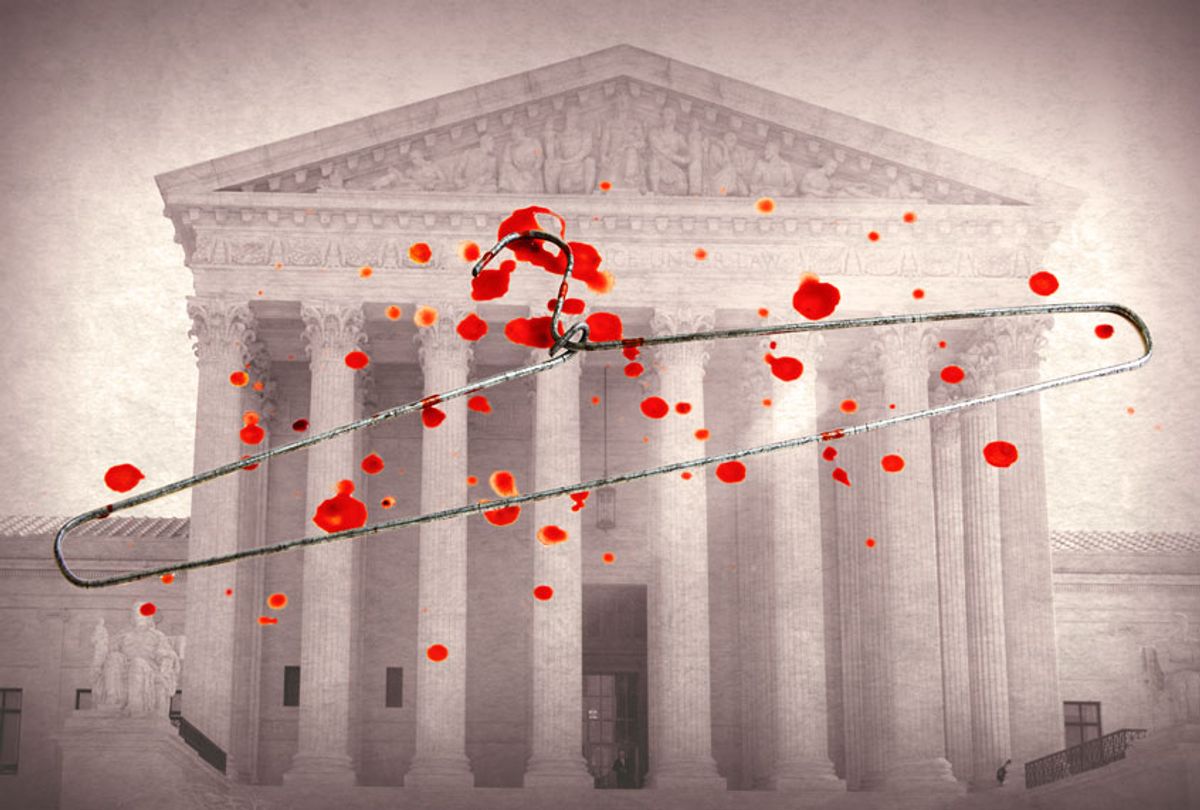 Anti-choice conservatives aren’t big fans of science, but the decision this week by the Supreme Court to uphold a Kentucky law mandating transvaginal ultrasounds for women seeking abortion procedures isn’t just anti-science, it’s medieval. It’s state-sanctioned rape. And it’s not the first time the Court has steamrolled both civil rights for women and science fact in lieu of misogyny and science fiction.

The question before the Court was whether the “morning after” prescription coverage allowed in the ACA prevented implantation of a fertilized egg or whether the medication merely blocked fertilization in the first place. Hobby Lobby wrongly insisted it was the former, that the medications were “abortifacients,” or abortion-inducing drugs. Multitudes of experts in the field, as well as the architects of the bill’s language, will attest to the reality that the morning-after pills required under the ACA in fact block fertilization. They do not induce abortions. The meds listed in the law prevent pregnancy in the first place, blocking the sperm from entering the ovum.

In other words, the ACA requires all health insurance plans to cover morning after pills — but only the specific types of pills that block fertilization, or non-abortifacient medication. Again, the pills mandated in the law, according to actual science, are absolutely not abortion-inducing. And yet the Supreme Court sided with Hobby Lobby anyway, essentially ruling that if a corporation believes the pills are abortion-inducing, the corporation doesn’t have to pay for employee health plans that include the pills. As a bonus, the Court confirmed that “closely-held” corporations are capable of holding religious beliefs, too — they are "persons" under the law, after all! — which might actually be more destructive than establishing corporate speech rights in the Citizens United case.

Ultimately, Hobby Lobby was a victory for hocus-pocus nonsense, and a major loss for scientific fact.

Likewise, there have been innumerable TRAP laws (targeted restrictions on abortion providers) that also steamroll obstetric science and fetal biology. We could spend all day listing them but one of the most egregious of the litter is something the then-Republican House passed in 2017, the so-called "Pain-Capable Unborn Child Protection Act."

The bill would’ve criminalized all abortions after 20 weeks of pregnancy. Donald Trump signaled that he wanted to sign the bill if it made its way through the Senate and landed on his desk. But this is a matter of science, which means the Republicans have it completely and stupefyingly wrong. The reason they landed on 20 weeks as the cut-off for having an abortion is because they claim that fetuses are capable of feeling pain at that stage of gestation.

Breaking news: Republicans are wrong again. Human fetuses don't feel pain until around the 27th week, nearly two months later than the scientifically-challenged GOP says. How do we know this? Actual doctors and scientists indicate that the central nervous system isn't developed enough to experience pain until roughly the onset of the third trimester.

This from the Journal of the American Medical Association (JAMA), which would be a publication by and for actual doctors:

Evidence regarding the capacity for fetal pain is limited but indicates that fetal perception of pain is unlikely before the third trimester [or 27 weeks]. Little or no evidence addresses the effectiveness of direct fetal anesthetic or analgesic techniques.

One reason the JAMA review finds early pain perception unlikely is that the connections between the thalamus, a sort of relay center in the brain, and the cortex have not yet formed. This happens between 23 and 30 weeks gestational age, and the authors argue these connections are a precursor for pain perception. They also cite studies using electroencephalography that have shown the capacity for functional pain in preterm newborns “probably does not exist before 29 or 30 weeks.”

So who should we believe: the leading medical experts in fetal biology or the current president, who needed four tries to correctly spell the word "hereby?” I hasten to note that, despite the Hobby Lobby decision, what we "believe" is irrelevant because this is a matter of science and not faith. It's a safe bet to go with the science on this rather than the misogyny-based whimsy of the old cranks who keep passing these "pain capable" bills — which, by the way, are the law of the land in 20 states (Alabama, Arizona, Arkansas, Georgia, Idaho, Indiana, Kansas, Kentucky, Louisiana, Mississippi, Nebraska, North Carolina, North Dakota, Ohio, Oklahoma, South Carolina, South Dakota, Texas, West Virginia and Wisconsin). Incidentally, only around 1.5 percent of all abortions occur after the 20th week.

All of that said, none of these TRAP laws are quite as awful as the Kentucky HB2 law and its relatives. Far-right crackpot Grover Norquist once mused about shrinking government down small enough to be drowned in the bathtub. These archaic, dark-ages TRAP laws are shrinking government small enough to fit into the vaginas of women seeking safe and legal medical procedures. The alleged small government people are requiring a medically unnecessary procedure — an invasive transvaginal ultrasound for pregnancies under the nine-week threshold, combined with a patronizing TED Talk about fetal organ development, and all of it laughably disguised as “informed consent.”

In case you’re unclear on the procedure, transvaginal ultrasounds are performed using a wand or “transducer” that’s inserted into the vagina of the patient, which, under normal circumstances, is useful for seeing more internal detail. Republicans responsible for HB2 are betting that once a patient sees an ultrasound image of her fetus, her sympathies and maternal instincts will kick into gear (finally!) and she'll opt out of the abortion after having bonded with the fetus. These disgusting assumptions assume that pregnant women, irrespective of the circumstances surrounding the pregnancies, do not understand what they're doing, or what's growing inside their bodies. So, here come the super-helpful Republicans to mansplain it to them, using a rapey wand and a live video feed.

It’s also germane to note that the appeals court judge whose decision to uphold the law is being endorsed by Trump’s Supreme Court, John K. Bush, was also a Trump appointee. But he’s not just any old judicial nominee. Bush emerged from the deep end of the Trumper crazy pool. Slate’s Mark Joseph Stern explained:

Before joining the bench in 2017, Bush was an anti-gay blogger who used the word faggot in a speech and urged Congress to “gag” “Mama Pelosi.” He complained that the State Department’s decision to provide gender-neutral passport applications to same-sex parents was worthy of “outrage.” He promoted “birther” conspiracy theories about President Barack Obama. And in 2008, he compared abortion to slavery, juxtaposing Dred Scott with Roe v. Wade and writing, “The two greatest tragedies in our country — slavery and abortion — relied on similar reasoning and activist justices at the U.S. Supreme Court.”

Worse, the ruling opens the door to countless other compulsory rape laws, each one adding more and more distance between women and their right to choose.

Imagine the government mandating medically unnecessary rectal exams or urinary cystoscopes to get a Viagra script. Imagine one of the Democratic candidates for president expressing support for such a law, as Trump did with the contra-scientific “fetal pain” law, or as the Supreme Court did with HB2. It doesn’t require an imagination to foresee the incels and Red Hats crapping their cages in reaction to it. Their outrage would be well-placed were it not for the brutal hypocrisy of it — it’s somehow perfectly acceptable for non-physicians to pass a law requiring, under penalty of fines and imprisonment, an irrelevant procedure that involves penetration into a sex organ, while similar laws pertaining to a man’s sacrosanct plumbing would never be considered. Ever.

It's difficult to imagine a more egregious trespass against civil liberties. One by one, Republican state legislatures have actively assaulted the extraordinarily private, wholly personal rights of women. And we can only imagine the further damage this will do to rape victims.

One last thing: Elections matter. The realpolitik stakes ought to be plain to see here, regardless of where you land among the Democratic Party factions, whether we’re talking about a presidential election that leads to Supreme Court nominees, or state and local elections that determine everything from TRAP laws to constitutional amendments to voter ID laws. This isn’t a game, and your vote isn’t solely about you. It isn't an affirmation of your own ideological purity. Our votes symbiotically determine the rights and indeed the lives of millions of others. We exist in a harrowing time when votes based on self-righteous contrarianism often lead to horrendous consequences. More than at any other time in recent memory, the forces of autocracy are deployed and waiting for orders to advance. In places like Kentucky, and especially among the congressional Republican caucus, they’re already on the march. We have no choice but to think globally and vote wisely. Or else.