Instant celebrity has a cost, and we as a society are paying for that false reality

Brother Nature, like other influencers, recently discovered how the lure of social media has a dangerous downside 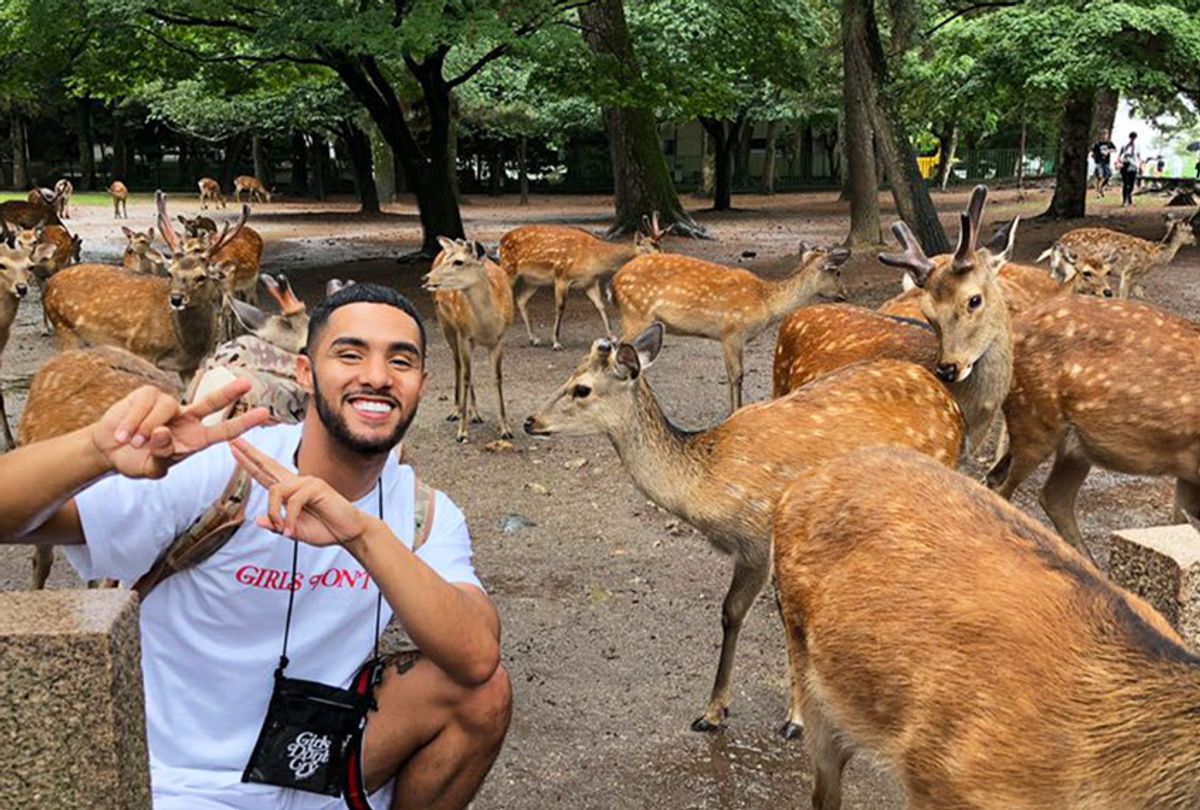 Brother Nature was trending on Twitter this week stemming from a video that reminded me of the dangers of social media celebrity in a fame-thirsty culture.

For those who don’t know, 21-year-old Kelvin Peña, better known as Brother Nature, is an internet sensation who became instantly famous after he released a series of viral Twitter videos of himself interacting with the deer that visited his yard back in 2016. He called them his “Deer Squad,” dressed them in jewelry, and continued to post videos of himself feeding and nurturing the animals. He’s since gained over 2.5 million followers on Twitter and 2.7 million on Instagram, building his positive “Brother Nature” brand, appeared in videos with famous rappers like Chief Keef, and became the go-to guy in the intersection between hip-hop and animal lovers.

But this time, Peña wasn’t trending for playing with deer or joking around with celebrity friends – he was fighting, and it looked bad. Initially I saw people online quickly siding with Peña and demonizing his attacker, tweeting, “Who in the world would hit Brother Nature? Why would someone attack Brother Nature?” Celebrity activist Shaun King even chimed in on Twitter saying, “We will find these men who did this to you.”

Peña was in Miami doing a beach clean-up. I scrolled more and clicked on the video, and the edit I viewed had two scenes. The first took place in a restaurant and displayed Peña balled up in almost a fetal position as a huskier man stood over top of him, unloading punches as if life depended on it. Brother Nature took all of the blows, not making even making an attempt to fight back. The second scene almost mirrored the first, except it appeared to be in the restaurant's parking lot.

I like Brother Nature; he’s a likable guy, and I think his videos are hilarious. I didn’t run to Twitter to give a dissertation on how corny I think his alleged assailant is for beating on a person who obviously didn’t want to fight, because I’m not an internet gangster, but the video left me upset. I never have and I never will like bullies – and this looked like a clear case of bullying to me – but was it? I only saw a clip, I wasn’t there, so what did I miss? Why would this guy beat on an internet celebrity for no other reason than jealousy and him wanting to be an internet celebrity himself? And if that is the case, then what is wrong with our generation? Are we so hungry for fame that we are willing risk our freedom by hurting animal lovers?

According to a study conducted by the market research company Morning Consult, “86 percent of people aged 13 to 38 would like to become a social media influencer. An increasing number of young people are turning away from conventional avenues of media consumption, like television, and are instead turning to social media apps like Instagram, Snapchat and YouTube.”

Brother Nature stumbled across fame by way of Twitter videos, and his alleged assailant is now being recognized across the internet  for attacking someone famous. These aren’t the only young people garnering mainstream attention. From Soulja Boy who is arguably the first YouTube rap star to the infamous Lil Tay, a.k.a.  “the youngest flexer of the century,” a 10-year-old Asian girl who poorly imitates a former-drug-dealing-black-gangsta-rapper on Instagram. Lil Tay has amazingly accumulated over 2 million followers by flashing money, jumping out of foreign cars, and promoting racist stereotypes. To an outsider, she looks like an amazing success story. To an inspiring YouTuber or person looking to gain social media fame and money, she probably looks like a role model. To a kid growing up in a country full people looking for work – where Trump's initial choice for Labor Secretary advocated for hiring robots over people because machines are “always polite, they always upsell, they never take a vacation, they never show up late, there’s never a slip-and-fall, or an age, sex, or race discrimination case" – Lil Tay looks like a dream. She's a young person, who whips out her phone, post vids, and collects checks.

“Influencers with up to 1 million followers can get $10,000 [per post], depending on the platform," Joe Gagliese, founder of Viral Nation, an influencer agency, told Vox in an interview. "And 1 million followers and up, you’re getting into territory where they can charge $100,000.”

I've given book talks at high schools, colleges, and jails all over the country where students ask me about the wave of social media sensations like Brother Nature, showed me their own Instagram and Twitter accounts, demanding that I follow. Even many of the incarcerated men and women whom I meet on the road miss their families, but they also want to reunite with their Instagram accounts. My 3-year-old niece helped my wife put icing on some cupcakes, and when they finished, she showed them to me and said, “If you want to see more, subscribe to my page.” She doesn’t have a page, but is probably influenced by other kids like Ryan Kaji, the 7-year-old millionaire behind Ryan’s World, formally Ryan’s Toy Review.

Were all of these success stories running through the mind of Brother Nature’s alleged attacker as he administered that beating? Did he see social media fame on the other side of Brother Natures wounds?

Other than the video of him exchanging words with Peña, we don’t know much about the alleged attacker who shared the videos of the assault multiple times before deleting them and tweets under the handle @Phatdabb-gmn. In one of videos, I was surprised to hear Phat Dabb say, “Don’t nobody know you, bro," mainly because he was quick to ride the wave, that spark of notoriety that came with being a social media star (or potential social media star), and to post the video that went viral. Like Lil Tay, Phat Dabb has a gangster persona on the internet: He uses a picture of the drug promethazine – an ingredient in the popular but deadly lean – for a header. But strangely, he also retweeted multiple accounts who posted, congratulated him, or referenced the fight. That’s not gangsta – that’s begging for an second-degree assault or reckless endangerment charge. I was raised in the '90s, and people who shared evidence when pressured didn’t live long, so I couldn’t imagine what would happen to a person who shared evidence voluntarily.

"Fame has completely changed in the last 20 or 30 years, primarily because of reality TV and also the internet and social media," said Yalda T. Uhls, professor of psychology at the University of California, Los Angeles in an interview, “There are so many different pathways for getting your name out there, so you can be famous just for being famous or for any kind of behavior."

Our society’s growing obsession with fame is scary. The first thing that comes to mind is the 2018 Parkland shooting at Stoneman Douglas high school in Florida. Seventeen people were injured, and even worse, 17 people died at the hands of a cowardly gunman . A collection of brave survivors including Emma González, Ryan Deitsch and Cameron Kasky emerged as voices for the fallen students. The school was given grief counseling; however, these kids, especially González, became major public figures. They were given social media handles and sent on a speaking tour – their message was anti-gun, strong, and necessary; however, was that mission fair to them? They shared their trauma for good and gained fame in the process. But how healthy that fame is can be debated. Phat Dabb shared trauma on a quest to gain fame as well, and while his intentions were completely different, wasn’t he going for the same result? The same result that Morning Consult discovered 86 percent of people between the ages of 13 and 38 want? To be big-time social media influencers.

As stated, I like Brother Nature, his videos have brought me joy; however, I don’t know him or what he is capable of. He could be cool guy – pleasant and fun, or he could be a narcissistic a**hole, the kind of narcissistic a**hole that starts unnecessary fights for no reason other than because he is a narcissistic a**hole. I don't know. That’s the point that everyone needs to remember, so I’ll put it in bold letters. WE DON’T REALLY KNOW ANY OF THESE PEOPLE!

A day had passed, and the story developed as more pieces come together. Other people started adding perspective, more videos came out, apparently. Brother Nature may have started the incident. A video from a different angle shows Brother Nature taunting both Phat Dabb and one of his friends by calling them each “dead man.”

One story reported that Brother Nature picked the fight with the restaurant manager because he wanted to be served at a table. All of the table sections were closed as the restaurant was preparing to shut down, so he was told to order at the bar. Brother Nature supposedly tried to use his fame to get table service, which may have sparked Phat Dabb to reply, “Don’t nobody know you, bro!” Was he really jealous or just annoyed?

And did he take Brother Nature's threat seriously? If so, then the beating that has branded Phat Dabb as a bad guy could be seen as justified to some, while Brother Nature can play victim, as he did in his initial Twitter response– and ride that story all the way to the bank. Either way, both scenarios are extremely toxic leaving us viewers, fans, and consumers duped.

Brilliant connections, amazing ideas , powerful movements, and countless ideas have all been made, discovered and found a home on social media – there's no debating that. Social media has also been and is becoming a bigger illusion where false realities are magnified. Now it's crossing the threshold, entering a place of danger– fights between adults and children are going viral, animal lovers are being stomped out and this "do anything for attention" behavior is being normalized and it will only get worse – as the two men in this incident, who could totally be good people, almost wrecked their lives over nothing.