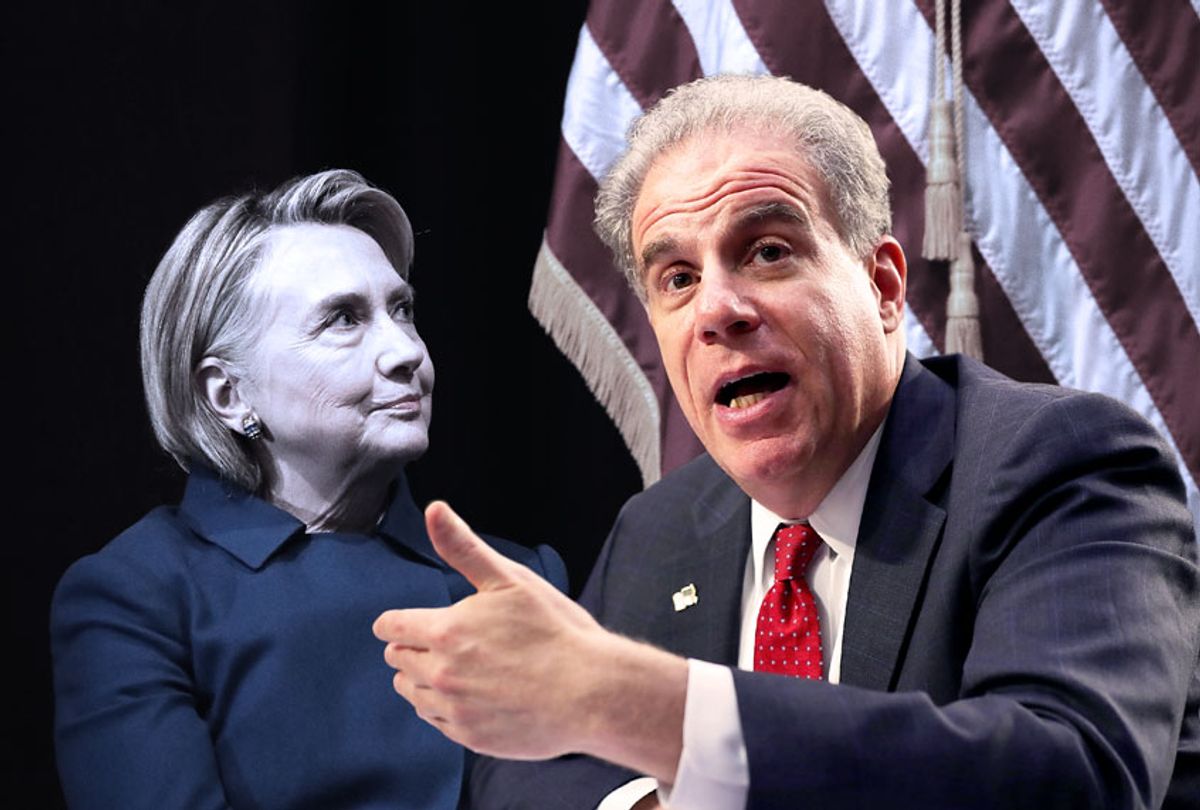 The Department of Justice inspector general told the Senate Wednesday that his office is still investigating apparent leaks from the FBI’s New York field office about the Hillary Clinton email investigation to Rudy Giuliani.

"Rudy Giuliani and others appeared to receive highly sensitive leaks from the New York FBI field office, leaks that likely contributed to Director Comey's public announcement he was reopening the Clinton investigation days before the election," Leahy said. "What can you tell us about the New York field office's leaks to Rudolph Giuliani and others?"

"We were very concerned about that,” Horowitz said, adding that his office has been investigating the alleged leaks. “This continues to this day. We are investigating those contacts."

Horowitz said that his office learned that some FBI employees “violated FBI policy,” adding that "we have some investigations ongoing."

"What's proving to be very hard is to prove the actual substance of the communications between the agents and the reporter, or the individuals, as you might guess, but we can prove the contacts, and under FBI policy you need authorization if you're going to disclose information and have certain contacts," he explained.

Giuliani, who was then a surrogate for Donald Trump’s campaign, teased a “surprise” on Fox News just two days before then-FBI Director James Comey announced that he was reopening the Clinton email probe two weeks before the election.

"I think he's got a surprise or two that you're going to hear about in the next few days. I mean, I'm talking about some pretty big surprises," Giuliani told Fox at the time.

Giuliani bragged in a radio interview after Comey’s announcement that the FBI director had bowed to “the pressure of a group of FBI agents who don’t look at it politically.”

“The other rumor that I get is that there’s a kind of revolution going on inside the FBI about the original conclusion [not to charge Clinton] being completely unjustified and almost a slap in the face to the FBI’s integrity,” he said. “I know that from former agents. I know that even from a few active agents.”

Giuliani later denied having any inside information, despite bragging about it in the media.

Comey testified to Congress last year that he had opened an investigation into the possible leaks before his dismissal. Comey said Giuliani had appeared to be making comments “based on his knowledge of workings inside the FBI New York,” which raised suspicion that “we may have a leak problem.”

Former Attorney General Loretta Lynch told Horowitz in a separate investigation that Comey confided in her that “there is a cadre of senior people in New York who have a deep and visceral hatred of Secretary Clinton.”

“He said it was surprising to him or stunning to him,” Lynch told the inspector general’s office. “It was hard to manage because these were agents that were very, very senior, or had even timed out and were staying on, and therefore did not really feel under pressure from headquarters or anything to that effect.”

Comey acknowledged to Horowitz that he was concerned about leaks when he reopened the probe.

“My worry was, I have to be careful that people in New York aren’t, by virtue of political enthusiasm, trying to take action that will generate noise that will have an impact on the election,” he said, according to the report.

“The FBI is Trumpland,” an FBI agent told The Guardian in October 2016, adding that “the reason why they’re leaking is they’re pro-Trump” and view Clinton as “the Antichrist personified.”

Horowitz later launched an investigation into the origins of the FBI’s Russia probe, While concluding that the investigation was not launched out of partisan bias against then-candidate Trump, he again found evidence of bias against Clinton at the FBI.

The report stated that investigators found text messages sent by senior FBI agents “which reflect their support for Trump in the 2016 elections.”

“If you hear talk of a special prosecutor … I will volunteer to work [on] the Clinton Foundation,” one senior agent wrote to a colleague the day after the election. The agent wrote he “was so elated with the election” that it was like “watching a Superbowl comeback.”

“Sh*t just got real,” he wrote in another message. “I saw a lot of scared MFers on … [my way to work] this morning. Start looking for new jobs fellas. Haha.”

The agent later told the inspector general’s office that he “fully expected Hillary Clinton to walk away with the election but, as the returns [came] in … it was just energizing to me to see … [because] I didn’t want a criminal to be in the White House.”