"The pot calling the kettle black is not something that we should do," one Democrat shot back at the Republican 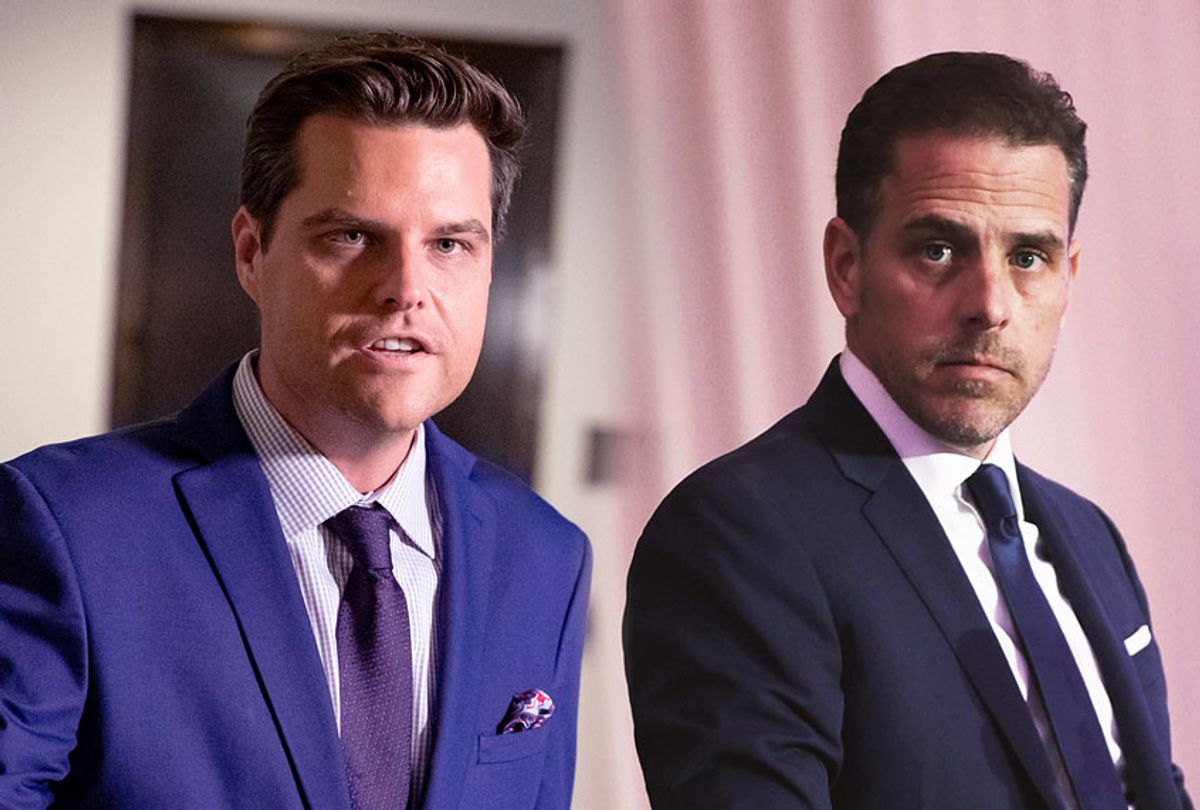 Rep. Matt Gaetz’s, R-Fla., attack on Hunter Biden over his past struggles with substance abuse at Thursday’s impeachment hearing backfired when he was called out for his own history of substance abuse.

"Hunter said that at that point, he had not slept for several days," Gaetz said today. "Driving east on Interstate 10 just beyond Palm Springs, he lost control of his car, which jumped the median and skidded to a stop on the shoulder of the westbound side."

The New Yorker piece detailed how Hunter Biden lost control of his car in 2016. An employee for Hertz, which had rented Biden the car, claimed to the outlet that he found “a crack pipe in the car, and on one of the consoles, a line of white-powder residue.”

"This is what we would call evidence," Gaetz said. "And I don't want to make light of anybody's substance abuse issues. I know the president's working real hard to solve those throughout the country, but it's a little hard to believe that Burisma hired Hunter Biden to resolve their international disputes when he could not resolve his own dispute with Hertz rental cars over leaving cocaine and a crack pipe in the car."

Rep. Hank Johnson, D-Ga., took issue with Gaetz’s comments and appeared to call him out for his own substance abuse issues. Gaetz was arrested for DUI in 2008 while clocked speeding by police on his way home from a nightclub in his father’s BMW. Prosecutors later agreed to drop the case.

"The pot calling the kettle black is not something that we should do," Johnson said, prompting laughs from some people in the hearing room.

"I don't know what members, if any, have had any problems with substance abuse and been busted in DUI. I don't know," Johnson added. "But if I did, I wouldn't raise it against anyone on this committee. I don't think it's proper."

Cameras showed Gaetz looking down silently as Johnson went after him.

After taking a not-so-subtle jab at Gaetz, Johnson asked the congressman if it is “ever OK for a president of the United States of America to invite foreign interference in an upcoming presidential election campaign.”

Johnson looked at Gaetz awaiting a response, but the Florida Republican sat silently for more than 15 seconds. Johnson then returned to his argument.

Gaetz later shrugged off the comments to CNN’s Manu Raju.

“I didn’t pay much attention to it,” he claimed. "I’m focused on the president . . . I don’t think Americans are hanging on a traffic incident I had a decade ago.”

But the Gaetz backlash did not end in the hearing room.

“My favorite part is the CSPAN camera panning right back to Gaetz at the mention of a DUI even though [Johnson] left his rebuttal purposefully vague because everyone - even the CSPAN camera operator - knows that Gaetz sounds like a raging hypocrite here,” tweeted journalist Brian Tyler Cohen.

“To be fair to Matt Gaetz, he is an expert on getting out of trouble because your dad is a powerful politician,” added former Department of Justice spokesman Matt Miller, referring to allegations that Gaetz’s lawmaker father had helped him get the case dropped.

“Matt Gaetz is used to his father getting him out of trouble,” wrote Democratic strategist Adam Parkhomenko. “Unfortunately for Gaetz, Hank Johnson is his daddy now.”

“Fun fact about Gaetz,” added HuffPost reporter Igor Bobic, “the nightclub he was driving from on the night he got a DUI was called …’The Swamp.’”