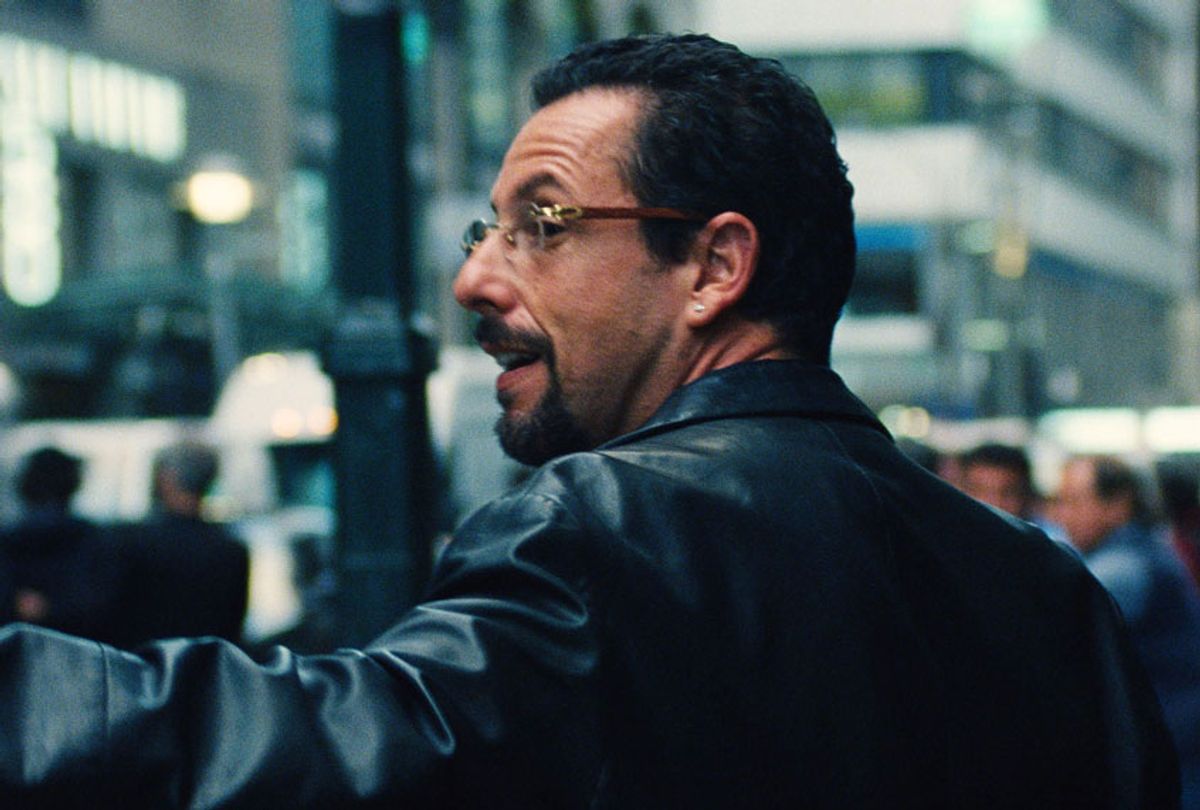 Howard Ratner (Adam Sandler), the protagonist of the nervy drama “Uncut Gems,” almost never stops moving. He also almost never stops talking, and his loud, abrasive Long Island nasal intonation is often irritating. Howard himself is annoying, impulsive, and disrespectful — and those are his better qualities. Being with him is both exhausting and exasperating, and viewers get to spend nearly 135 minutes with him in the exhilarating new Safdie Brothers’ film.

It's the Spring of 2012, and Howard is a high-strung, hot-headed, motormouth jeweler in New York City. He hustles. He has to. He is up to his neck in debt and doubling down by making crazy bets in hope of a big payoff. He's also under immense pressure as audiences are first introduced to him as he's getting a colonoscopy, which just increases his anxiety levels since his doctor is insisting on double-checking some results.

Yet Howard seems to think he finally has an opportunity to silence all comers. When a package arrives at his store containing an opal from the Ethiopian Welo mine, this uncut gem is — after multiplying the carats — likely worth over a million dollars.
To get the cash, the opal is going to be auctioned off, but before Howard delivers it to the seller, he loans it to Kevin Garnett, the Boston Celtics center. The opal brings Garnett good luck, and Howard lucks out at first, too.

Of course, Howard’s good fortune and good mood are not going to last, which is why his long, downward spiral is so absorbing for viewers who can appreciate the wild ride. (The film should also generate a fair number of walkouts by folks who can’t take the strain). Garnett fails to return the opal as promised. Howard is shaken down by his brother-in-law Arno (Eric Bogosian), among others, for money owed. And he has tensions at home with his wife, Dinah (Idina Menzel). His problems multiply, like the opal’s carats, but he just stays focused on that payday.

“Uncut Gems” insists on keeping audiences on tenterhooks as Howard tries to play the ends against the middle — or just stay one step ahead of his enemies—waiting for his windfall. He becomes enraged when the security door of his jewelry store won’t open, and unglued when he tries to resolve a perceived error with the auction house. Such moments are compelling because Sandler (and the Safdie brothers) are so committed to Howard. They understand what makes this schmuck tick, and viewers will, too. He is compulsive. He is a liar. And he does not know how to not misbehave. When Howard hands out a series of expensive watches to folks he owes money to, he is literally borrowing time (and money). Howard often puts people in a bad position — especially his family — and he asks practically everyone he meets for a favor and a second chance. His desperation is cringe-inducing, and his ability to screw things up badly is darkly funny.

It is hard not to marvel at Howard’s juggling. He can work a room of customers, bark deals at everyone he meets, and try frantically to manage his wife, kids, and mistress. (There is an amusing episode where Howard goes to great lengths to prevent his son from learning about his mistress, but the kid does, causing him additional and unnecessary aggravation.) By the time his doctor calls with the results of his biopsy, it is almost a relief; either Howard will be healthy to continue living his hectic life, or he can plan for an early death that will end this hell on earth of his own making.

“Uncut Gems” depicts some real risky behavior as it unfolds, and viewers may be wise to bring a case of Tums to chew on, especially during the film’s nail-biter of an ending. Howard revels in the beauty of high-stakes betting in a virtuoso scene where he goes all-in on Garnett in Game 7 of a series. The sequence showcases Sandler’s tour-de-force performance. As manic Howard experiences all kinds of emotions watching this critical basketball game, viewers cheer and sweat out the results along with Howard. The Safdie brothers wring every moment for maximum anxiety, and they are downright relentless.

The filmmakers employ a handheld camera to convey the intense pressure of Howard’s life, following him constantly and pushing close-ups to scrutinize him. There is care and attention to the costumes — Idina Menzel gets decked out like a “Real Housewives of Long Island,” and she is worshipped when she fits into her bat mitzvah dress. The jewelry is also perfect. There is a great bit where Howard shows off a tacky “gremlin” necklace with moving eyes to Kevin Garnett. Even the synth music score, by Daniel Lopatin is effective, as is the use of Billy Joel’s “The Stranger” in an appropriately revealing moment.

“Uncut Gems” does have a few quiet moments, such as one where Sandler tries to talk with his daughter, or another, at a seder, where Howard has to read the plagues aloud — an obvious metaphor for all that is torturous in his own life. These scenes hint at the possible mensch Howard could have been if he had empathy for others, and was not so consumed with hubris, greed, and lust. A scene where he tries to connect with his wife is highly satisfying because of her reasoned, no-nonsense response to his behavior.

Sandler’s performance is transfixing because he makes viewers root for this poor bastard, generating sympathy even when Howard is wrongly on the attack, or at his most despicable. He is hard-headed, unpolished, thoroughly infuriating, and impossible not to watch. Sandler reaches giddy highs when Howard is sexting his mistress Julia (Julia Fox), but also extreme lows, as when he hits rock bottom with a bloodied face, a bruised ego, and an uncertain future.

In support, Julia Fox, in her feature debut, is also fantastic. After Julia and Howard get into an argument at a nightclub, the Safdie brothers give Fox a scene-stealing moment. As Julia cools off, walking with shame and anger past the “losers” standing outside the club she was just ejected from, she absorbs all that has just happened to her. Fox masks Julia’s considerable pain while also deflecting the taunts the witnesses are shouting at her. It is a remarkable sequence that shows the resilience of her character, and her mettle becomes an asset in the film’s smart denouement.

“Uncut Gems” is merciless, but it is a shrewd character study. It is designed to keep viewers unsettled, which it does, admirably. And yet, for all the vexation the film engenders, there is still a corker of an ending.