Greta Thunberg apologizes after saying that world leaders should be "put... against the wall"

Thunberg claims when she said leaders should be "put... against the wall," she was not referencing firing squads 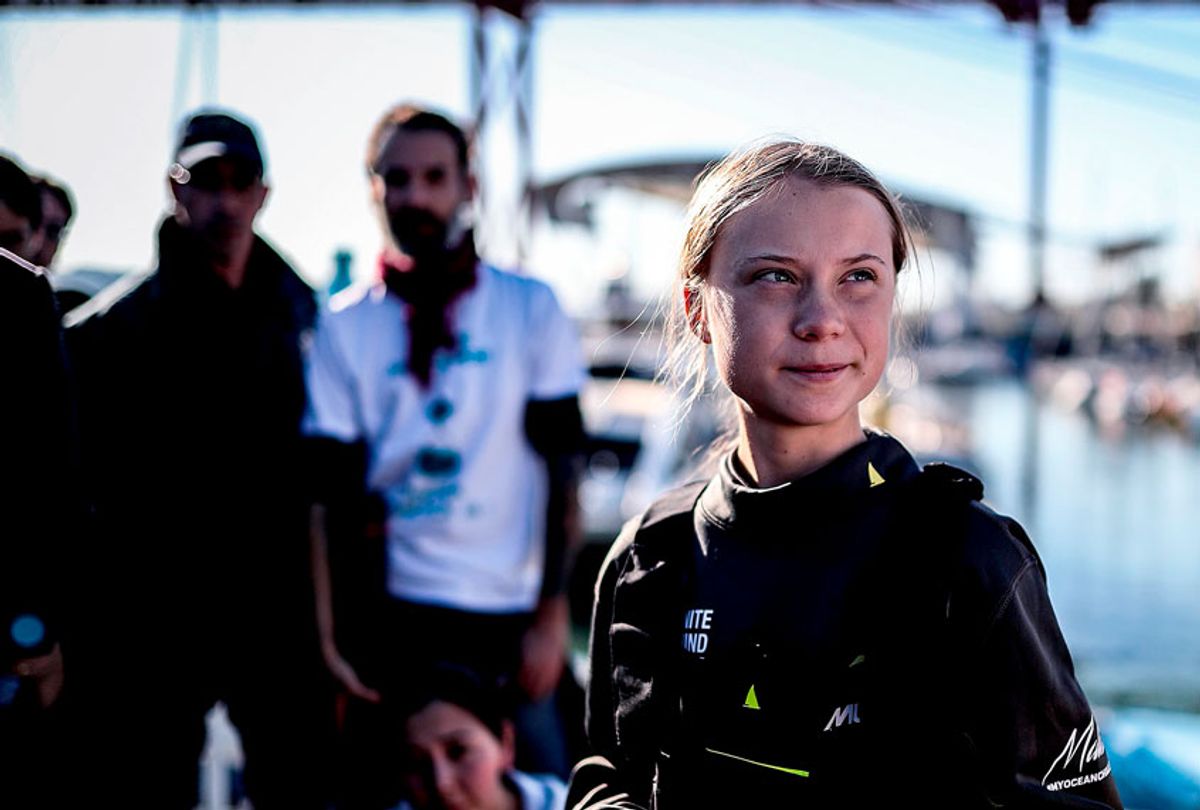 Swedish climate activist Greta Thunberg is pictured after disembarking from the catamaran La Vagabonde at the Santo Amaro docks in Lisbon, on December 3, 2019. (Photo by CARLOS COSTA / AFP) (Photo by (CARLOS COSTA/AFP via Getty Images)
--

Climate activist Greta Thunberg apologized on Saturday for saying that world leaders should be "put... against the wall" about global warming, arguing that she was using an innocuous Swedish expression and was unaware of its association with firing squads in English.

"World leaders are still trying to run away from their responsibilities, but we have to make sure they cannot do that," Thunberg said to a Fridays For Future protest in Turin, Italy. "We will make sure that we put them against the wall, and they will have to do their job to protect our futures."

After learning that her comment can be interpreted in English as a physical threat, Thunberg took to Twitter on Saturday and explained what she had intended to say.

"Yesterday I said we must hold our leaders accountable and unfortunately said 'put them against the wall'. That’s Swenglish: 'att ställa någon mot väggen' (to put someone against the wall) means to hold someone accountable. That’s what happens when you improvise speeches in a second language," Thunberg explained in a pair of tweets.

She added, "But of course I apologise if anyone misunderstood this. I can not enough express the fact that I - as well as the entire school strike movement - are against any possible form of violence. It goes without saying but I say it anyway."

Last week Thunberg was chosen as Time's 2019 Person of the Year, with the magazine awarding her with the title because of her work to raise awareness about the ecological disasters caused by man-made climate change. The profile described Thunberg as one among many “leaders with a cause and a phone who don’t fit the old rubrics but who connect with us in ways that institutions can’t and perhaps never could." Time added that her climate strike was part of a larger trend that included “the student-led protests on the streets of Santiago, Chile, to the young democracy activists fighting for rights and representation in Hong Kong to the high schoolers from Parkland, Fla., whose march against gun violence Thunberg cites as an inspiration for her climate strikes.”

Thunberg's selection raised the ire of many conservatives, with President Donald Trump tweeting that it was "so ridiculous. Greta must work on her Anger Management problem, then go to a good old fashioned movie with a friend! Chill Greta, Chill!”

Thunberg, in an apparent response to the president's tweet, changed her Twitter profile to describe herself as “a teenager working on her anger management problem. Currently chilling and watching a good old fashioned movie with a friend.”

Similarly Fox News host Laura Ingraham invited on as a guest Raymond Arroyo, the lead anchor of the news division for Eternal Word Television Network, who said that Thunberg set a "horrible example" because “she dropped out of school to become a junior protester." He added that he thought she was telling kids “just go protest, you don’t have to go to school. And I know she sails around the globe to help the environment, but this isn’t sailor of the year. It’s ‘Person of the Year.’”