"I will not cross the union's picket line even if it means missing the debate," Sen. Elizabeth Warren vowed 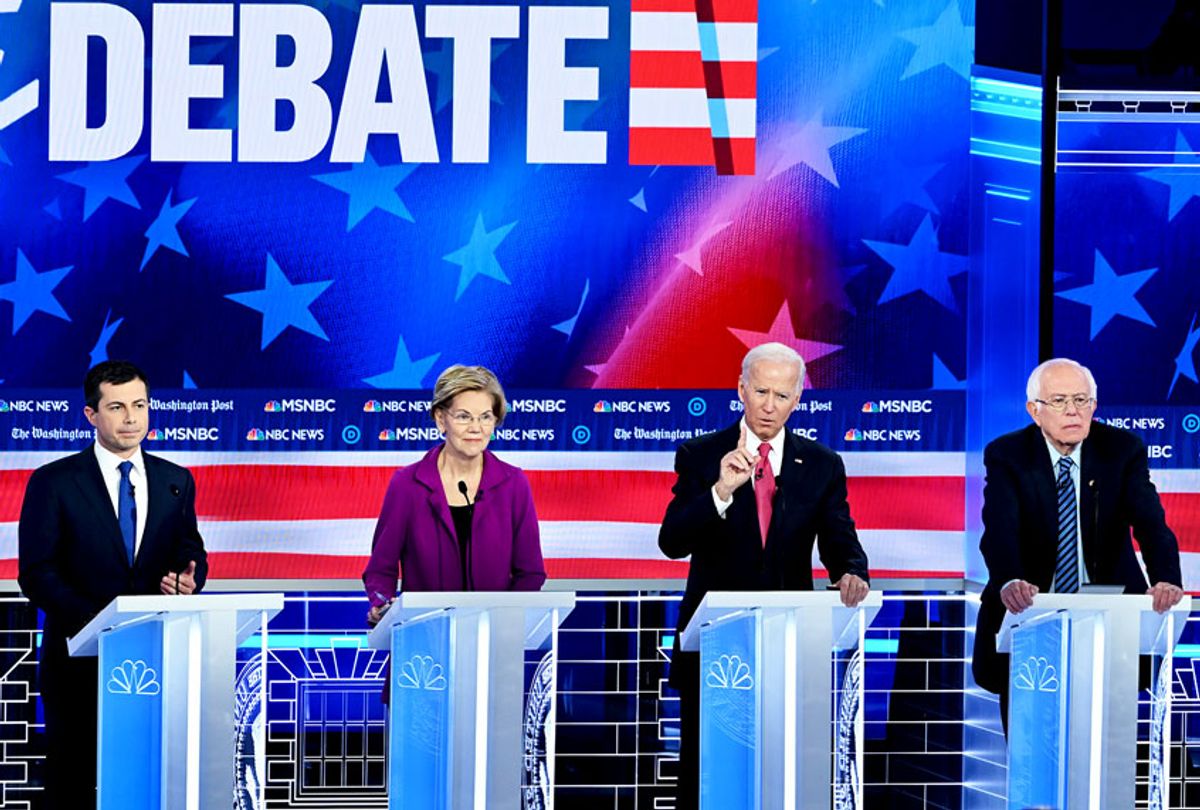 The food services company Sodexo announced plans to meet with a food workers union by Tuesday after all seven presidential candidates who are set to take the stage at Thursday’s primary debate vowed to boycott the televised event if the labor dispute was not resolved beforehand.

“We want to thank the nine Democratic candidates who have expressed their support for Sodexo workers at Loyola Marymount University fighting for a fair contract with better wages and affordable healthcare,” Susan Minato, co-president of Unite Here Local 11, said Sunday in a statement. “We look forward to continuing negotiations with Sodexo this Tuesday or sooner in hopes of reaching an agreement before Thursday’s Democratic debate.”

Unite Here Local 11 on Friday addressed a letter to Sen. Bernie Sanders, I-Vt., saying it had been “in negotiations with Sodexo since March for a collective bargaining agreement, but the parties have yet to reach resolution." According to the union, Sodexho said it would "not come back to the table until January" after it "abruptly cancelled scheduled contract negotiations last week."

The union claims that Sodexo “does not provide year-round work, decent yearly wage increases and affordable health care.” It also warned that “if the situation remains unresolved, there could be picketing on the evening of the debate.”

The first Democratic presidential candidate to declare that she would not participate in the debate if it meant crossing a picket line was Sen. Elizabeth Warren of Massachusetts.

“.@UniteHere11 is fighting for better wages and benefits—and I stand with them,” Warren tweeted Friday. “The DNC should find a solution that lives up to our party's commitment to fight for working people. I will not cross the union's picket line even if it means missing the debate.”

Sanders soon joined her, announcing that “I stand with the workers of @UniteHere11 on campus at Loyola Marymount University fighting Sodexo for a better contract. I will not be crossing their picket line.”

Former Vice President Joe Biden wrote Friday that “I won't be crossing a picket line. We’ve got to stand together with @UniteHere11 for affordable health care and fair wages. A job is about more than just a paycheck. It's about dignity.”

South Bend Mayor Pete Buttigieg added, “I take the debate stage to stand up for workers’ rights, not to undermine them. I stand in solidarity with the workers of @UNITEHERE11 at Loyola Marymount University and I will not cross their picket line.”

The union controversy is not the only controversy plaguing Thursday's primary debate. The Democratic Party on Saturday resisted a request by the seven qualifying candidates— plus two candidate who did not qualify for the debate: former Secretary of Housing and Urban Development Julián Castro and Sen. Cory Booker of New Jersey — to change the current debate requirements to allow for a more diverse field of candidates to participate on stage.

“The DNC has led a fair and transparent process and even told campaigns almost a year ago that the qualification criteria would go up later in the year — not one campaign objected,” the Democratic National Committee explained in a statement to Politico. “The DNC will not change the threshold for any one candidate and will not revert back to two consecutive nights with more than a dozen candidates. Our qualification criteria is extremely low and reflects where we are in the race.”

The DNC added that it “will continue to have fair criteria that reflects each point in the race.”