"A trial without witnesses is not a trial. It's a rush to judgment. It's a sham trial," Schumer responds 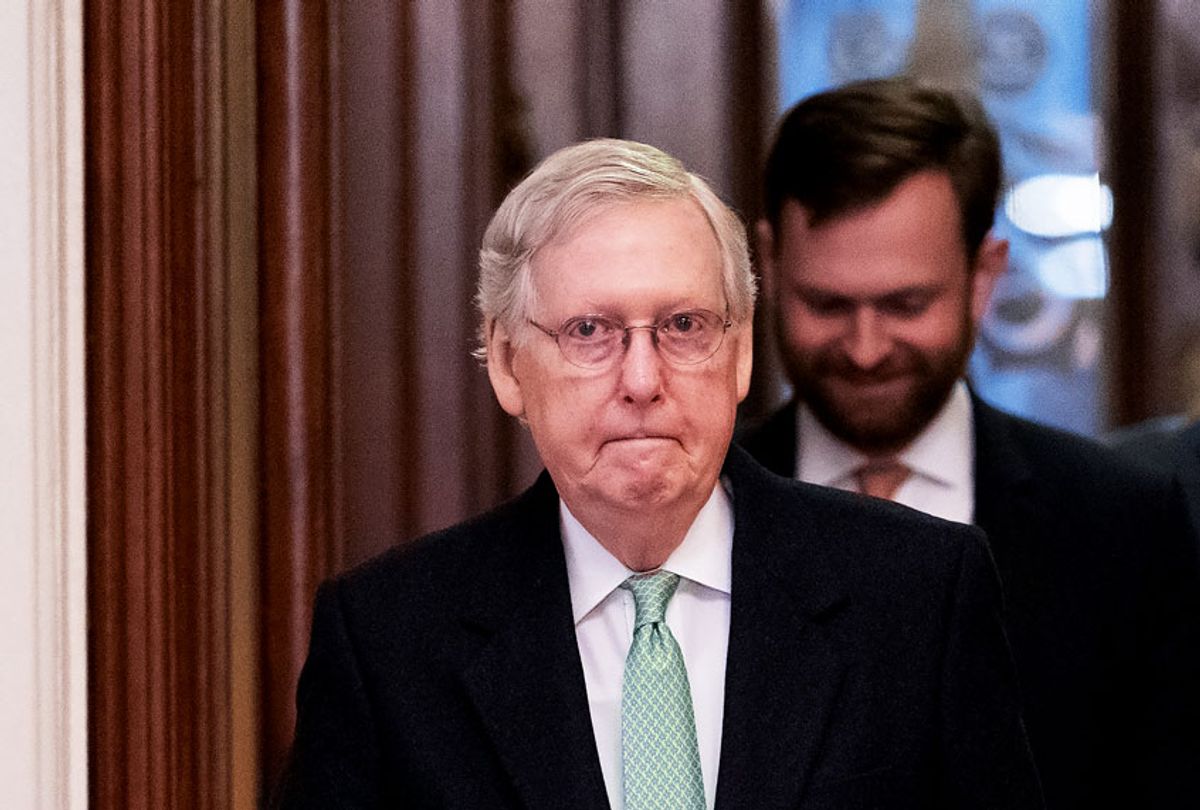 Senate Majority Leader Mitch McConnell rejected a call from his Democratic counterpart Tuesday to simultaneously agree to witnesses and the rules of a likely Senate impeachment trial of President Donald Trump, calling it as a "strange request" that breaks with precedent.

Speaking on the Senate floor, McConnell, R-Ky., said Sunday's request by Senate Minority Leader Chuck Schumer was "dead wrong." Calling the House's case against Trump "deficient," he added that the Senate would not volunteer its time for a "fishing expedition."

The GOP leader's remarks come in response to a letter from Schumer declaring that Senate Democrats wanted to hear testimony from four administration witnesses who have not previously testified in the inquiry: former national security adviser John Bolton, acting White House chief of staff Mick Mulvaney, senior adviser to the acting White House chief of staff Robert Blair and Office of Management and Budget official Michael Duffey. Mulvaney, Blair and Duffey defied subpoenas from House committees, while Bolton, who was not subpoenaed, has said he would fight one in court.

Schumer also called for the Senate to subpoena documents blocked by the Trump administration, which could shed light on the events at the heart of the charges against Trump: his effort to solicit Ukrainian President Volodymyr Zelensky to investigate his political rivals and his decision to temporarily withhold nearly $400 million in military aid to Ukraine.

McConnell on Tuesday criticized House Democrats for declining to go to court to enforce subpoenas for testimony from witnesses who declined to testify, calling their inquiry "the most rushed, least thorough and most unfair impeachment trial in modern history." He claimed that Schumer wanted to hear testimony from those officials, because House Democrats "failed to come anywhere near the bar for impeaching a duly-elected president."

"It is not the Senate's job to leap into the breach and search desperately for ways to 'get to to guilty,'" McConnell said. "The Senate is meant to act as judge and jury — to hear a trial. Not to re-run the entire fact-finding investigation, because angry partisans rushed sloppily through it."

Schumer responded with his own floor speech moments later, retorting that he "did not hear a single sentence — a single argument as to why the witnesses I suggested should not give testimony" in a Senate trial.

"Why is the leader — why is the president so afraid of having these witnesses come testify?" Schumer asked. "The leader seems obsessed with 'speedy' and wants to throw 'fair' out the window. To simply repeat the arguments that were made in the House and Senate when there are witnesses and documents that could shed light on what actually happened? Why not have them?"

Schumer suggested that he would use his procedural powers to force votes on calling witnesses in January, adding that the "American people will be watching."

"A trial without witnesses is not a trial," he continued. "It's a rush to judgment, it's a sham trial."

The battle between the two leaders over the structure of the Senate impeachment trial is certain to complicate bipartisan negotiations over the ground rules. With the House of Representatives expected to vote to impeach Trump on Wednesday, triggering a Senate trial, senators across the aisle hope  party leaders can at least strike a deal on basics like when the trial will start and how much time will exist for debate.

Schumer has proposed a timetable for each side to present its case, modeled on the five-week trial of former President Bill Clinton in 1999. Twenty years ago, the Republican-controlled Senate approved a resolution with unanimous support establishing the rules of Clinton's impeachment trial, followed by a vote along party lines to subpoena witnesses. Both Schumer and McConnell have indicated that they want to follow the format of the 1999 trial, but have very different views about how to do so.

The Republican majority ultimately has the power to set trial rules without Democratic votes, but it will require unity from 51 members of the 53-member majority.