Meghan McCain compares herself to "Mother of Dragons" from "Game of Thrones": I "won't be quiet" 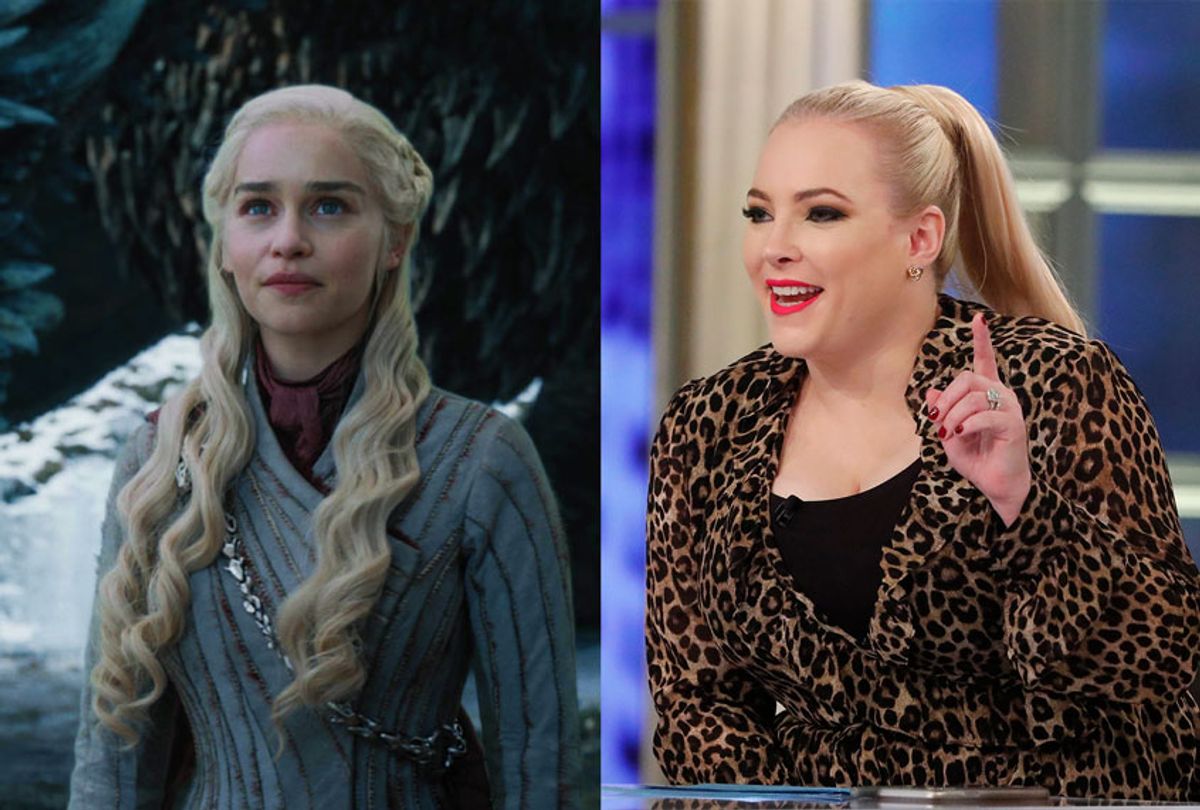 Though she compared herself to Daenerys Targaryen from the hit HBO series “Game of Thrones,” Meghan McCain appears to have made amends with Whoopi Goldberg after she was asked to “stop talking” on Monday’s episode of “The View” by the show’s moderator.

“We’re just going to do a little clean-up before we do anything,” Goldberg said at the beginning of Tuesday's broadcast. “You know, things get heated on this show. If you watch this show, you know this has happened over the years. We’re really passionate. This is our jobs. We come in. We talk to each other. Sometimes we’re not as polite as we could be. That’s just the way it is.”

Goldberg then urged viewers to realize that this did not mean “we’re over here with butcher knives under the table.”

During the incident in question, McCain was told by Goldberg to “please stop talking” after pair got into a heated discussion about impeachment. After the flare up on live TV, McCain posted a series of tweets on Monday in which she claimed that “Dems and Rs alike need to confront the ugly truth: both parties are failing to be impartial jurors. I won’t be quiet, even if the reality reflects poorly on the entire political establishment.”

She added, “I have a responsibility to speak for the 50% that feels media doesn’t represent them. Pointing out things that are true is part of my job even if it angers people and even if it’s politically inconvenient. Pretending half the country doesn't exist won't make them disappear. The culture war is real, and Americans who aren't part of the overwhelmingly anti-conservative media deserve to have their views represented.”

McCain concluded with a tweet on Tuesday morning with video from “Game of Thrones” and a message: “Good morning - to all the fellow conservative ‘girls’ who won’t be quiet.”

The image McCain selected showed the character played by Emilia Clarke with one of her pet dragons and either ignored or was ignorant of the fact that Targaryen became a villain in the final season of the show. Although initially viewed as someone who could save the fictional continent of Westeros, Clarke’s character soon succumbed to madness and wound up murdering hundreds of thousands of innocent people in the city of King’s Landing despite the fact that they had already surrendered.

Though McCain appeared to advance the feud on social media for nearly 24 hours, she seconded Goldberg’s comments on Tuesday’s show.

“Whoopi and I get along great,” McCain said. “I love you very much. I’ve loved you for a long time. You were good friends with my dad. We fight like we’re family. It’s all good. We’re not tearing the set apart. Calm down — all of you. It’s all good.”

Co-host Abby Huntsman interjected, rhetorically asking the program’s critics to “name another show on television that does this. That talks about the most controversial issues of the day with such different women, different ages, different backgrounds, different times in their life and does it every single day with cameras rolling.”