Another debate: Can Democrats wrest attention away from Trump with a positive vision?

In the final debate of 2019, Democratic presidential candidates must offer a positive vision for dark times 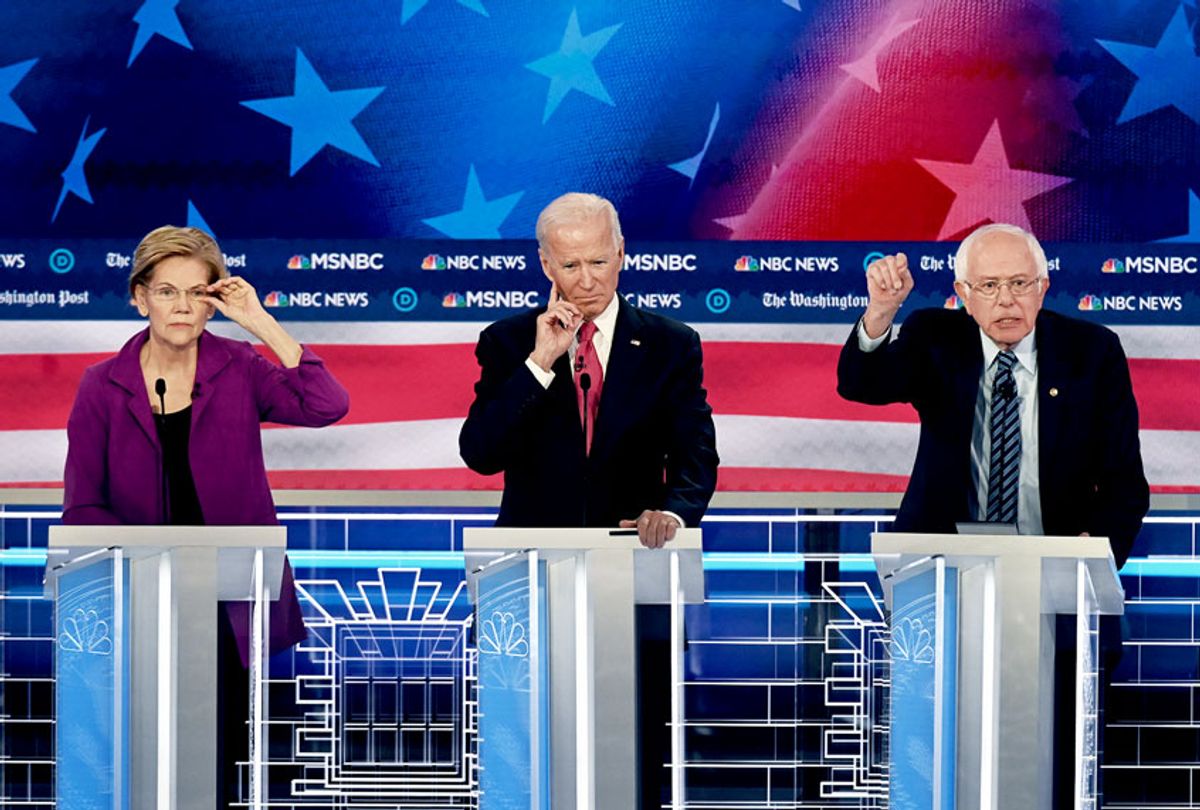 In one sense, there are many reasons to be optimistic about the Democratic debate at Loyola Marymount University in Los Angeles, which kicks off at 8 p.m. Eastern on Thursday night. (This one is on PBS.) For one thing, more stringent debate standards have finally begun have culled the number of participants: We're down to seven, from the 10 who made the stage in November.

Democrats are also sailing into the debate having won both a moral and political victory: They leveraged a collective refusal (spearheaded by Sen. Elizabeth Warren of Massachusetts) to attend the debate until a food service workers union that serves Loyola Marymount was granted a contract. The flex worked, the workers got their contract and the debate is back on, after Democrats modeled what labor solidarity can look like in practice.

Yet, it's hard to deny that a cloud hangs over the proceedings. For one thing, there's no small amount of anguish over the fact that with Sen. Kamala Harris of California dropping out of the race, and with Sen. Cory Booker of New Jersey and former HUD Secretary Julián Castro failing to qualify, this debate will have no any black or Latino candidates. With the only candidate of color left being businessman Andrew Yang, Democratic candidates signed a letter to Democratic National Committee chair Tom Perez asking that the debate qualifications be revised. Perez declined.

But the darkest cloud, of course, is the impeachment battle in Washington. On Wednesday night, House Democrats finally impeached President Trump, albeit for only a fraction of the overall crimes that the tackier-than-your-typical-mafioso president has likely committed. That should have felt like a victory, but the knowledge that the Republican-controlled Senate won't even pretend to care about Trump's criminality has cast a pall over the whole thing.

That's by design of course. Senate Majority Leader Mitch McConnell is a clever sort of soulless monster. He knows that the best chance Republicans have in the 2020 election cycle comes from draining the populace of hope, demoralizing those voters who want to believe in the power of democracy and leaving only those who vote out of spite. That of course benefits Republicans, who win the vast majority of the spite vote.

Democrats hitting the stage Thursday night should look at this landscape and strive to make this debate a beacon of hope in these dark times. Whoever wins the nomination will need to build a winning coalition, and to do that they need voters to believe that things can get better. That process needs to start now, before the calendar flips to 2020 and the election season kicks off for real. (The Iowa caucuses are now less than six weeks away.)

There are both reasons to be hopeful and concerned that the Democratic candidates can accomplish this.

On the concern front is the increasingly negative tone of the campaign as actual voting day gets closer. This has been driven primarily by South Bend, Indiana, Mayor Pete Buttigieg, who's letting his shark side show in recent months. Buttigieg has been particularly aggressive in his attacks on Warren, recognizing that his best shot is to chip away at her existing base of college-educated white voters by making them fear that she's too radical to beat Trump in November. Buttigieg may try to corner the fear vote with even bolder swipes during the debate, which could help him — especially with the wealthy donors he's been cultivating — but could also demoralize viewers who want a little more positivity from Democrats.

What makes the situation even more painful is the strange fact that while a perfectly legitimate and reasonably progressive candidate like Cory Booker didn't even qualify for this debate, Yang and billionaire Tom Steyer both did. Steyer basically bought his way  on stage and Yang is coasting on the crank vote. It's depressing that these influences seem to be gaining potency in Democratic politics, even as the goal is to remove a (supposedly) wealthy crank from the Oval Office. (Besides Buttigieg, Steyer, Warren and Yang, this debate will include former Vice President Joe Biden and Sen. Bernie Sanders — both at or near the top of recent polls — along with Sen. Amy Klobuchar, who keeps hoping for an opening in the "moderate" lane, somewhere between Biden and Buttigieg.)

There is also reason to be hopeful. Last month's debate, helmed by an all-female panel of moderators, was surprisingly substantive and cheerful, especially compared to previous debates. All but one of Thursday's moderators is from "PBS NewsHour," so the tone ought to be relatively serious, and not so much focused on creating "fireworks," The candidates themselves are no doubt aware how despondent their potential viewers are, and how much they long for some glimmer of hope that things can get better.

So here's hoping for that hope. No matter who the eventual nominee is, if she or he can't make the voters believe there's a light at the end of this tunnel, we'll be looking at another four years of Trump this time next year.